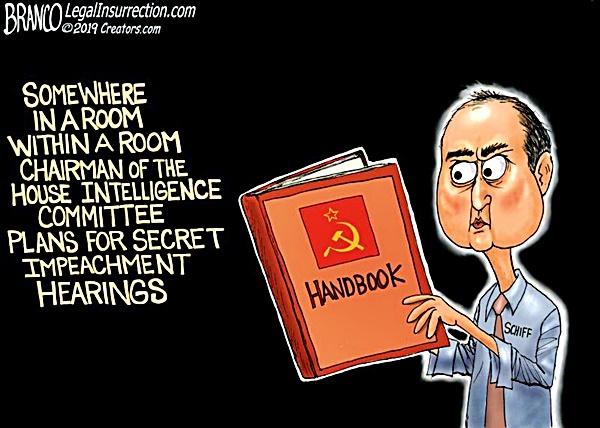 Since the Dems are clearly warping Constitutional Intent, creating gutless lies and  fabricating witnesses ex nihilo against President Trump to remove him from Office; this submission from 11/1 is still extremely valid TODAY November 4.

Support this Blog HERE. Or support by getting in

the Coffee from home business – OR just buy some healthy coffee.

Democrats: DANGEROUS TO THE REPUBLIC

Something foul has gripped the Democratic Party, and under Speaker Nancy Pelosi’s weak leadership, and prodded on by the despicable fraud and liar known as Representative Adam Schiff, the Democratic Party is weaponizing the process for impeaching a sitting U.S. president, despite the fact that President Donald J. Trump, love him or hate him, has not committed any high crime or misdemeanor. Their unhinged zeal to avenge the 2016 loss and damage Pres. Trump before the 2020 election has them snorting too much gas from imaginary smoking guns fired by people with an agenda, and in their non-linear manner of thinking, they continue their Marxist assault on the Republic, through their own lawless and criminal behavior and a kangaroo court and inquisition.

On October 31st, the House Democrats held a vote on a resolution to proceed with an impeachment inquiry, which passed with a vote of 232-196. Two Democrats, Jeff Van Drew (NJ) and Collin Peterson (Minn.) voted against the move, and one time Republican turned Independent, Justin Amash (Mich.) voted in favor of the inquiry.

This same day at 10:35 AM, Kevin McCarthy (R-CA), Minority Leader in the House, tweeted: 100% of Republicans just voted AGAINST this sham impeachment. Two Democrats joined us. Speaker Pelosi and Chairman Schiff have both insisted that impeachment should be bipartisan. The only bipartisan vote today was AGAINST impeachment.”

Representative Devin Nunes, the top Republican on the Intelligence Committee, suggested the Democrats had turned into “a cult”, angrily adding: “We now have a full-fledged impeachment committee in the basement of the Capitol. Think about that, America.”

Prior to the vote, Democrats took their proceedings into the basement of the Capitol and conducted closed door hearings for weeks, overseen by the Intelligence Committee, as a justification for their secrecy, and controlled by Adam Schiff in a Soviet style process, when such hearings on impeachment have always been conducted in the Judiciary Committee in the past. Shifty Schiff limited Republican access to witnesses and details discussed and gave Democrats unfettered access to all the proceedings, and he has ignored due process by blocking President Trump’s counsel, creating a substandard process that is dangerous to the presidency and the future of the United States Republic.

Under this new resolution, the Democrats are still cutting the President’s counsel out of the hearings in unprecedented fashion and violating the due process that is his right. The President won’t even be able to question any witnesses until the process has long been underway, and, although Republicans can request witness testimony, the Democrats have voted themselves the option of refusing those requests.

Much of the Democrats’ supposed evidence of wrongdoing centers on allegations made by Lt. Colonel Alexander Vindman, a National Security Council staffer, and Eric Ciaramella, a CIA analyst. Both men have reason to oppose President Trump, but not to attack him in such a vicious manner as championing an impeachment process that wreaks of treason and a continued attempt to unseat a duly elected President of the United States.

[Blog Editor: On Vindman despite valor in battle:

When looking at Vindman valor there is something in historical context to look at. Benedict Arnold was one of George Washington’s best generals in the Revolutionary War – until he wasn’t.]

Paul Sperry, investigative journalist, notes that Ciaramella is an Obama holdover and a registered Democrat, who has previously worked with Vice-President Joe Biden and CIA Director John Brennan, who played a key role in the long-running soft coup against President Trump. Ciaramella was also removed from his National Security Council posting at the White House in the middle of 2017, due to his breach of the chain of command and numerous anti-Trump leaks to the media. He is also supposedly the “whistle blower”, although Sperry’s account still remains unconfirmed at this point; however, Ciaramella’s name does seem to be on everyone’s lips in D.C. at the moment.

[Blog Editor: On Eric Ciaramella’s credibility as any kind of witness against President Trump:

Any questions? Dems Lie! The Dems are more concerned about transforming the Republic away from Founding Principles than preserving the Republic. AND Eric Ciaramella is ONLY one example of Dem-Marxist transformationism]

In a move the mainstream media saw as an attempt to out the whistle blower, Rep. Louie Gohmert (TX) recently asked a witness about Eric Ciaramella. Later, speaking to a Dallas radio station, Gohmert stated: “A lot of us in Washington know who it is. He’s a very staunch Democrat … a point person on Ukraine, during the time when Ukraine was its most corrupt, and he didn’t blow any whistles on their corruption.”

Lt Colonel Vindman was born in Ukraine, and although commendable, receiving a Purple Heart for being wounded in combat, as he was, doesn’t make him a hero whose every word must be taken as the Gospel. It only means he didn’t shirk his duty and he served honorably, as have so many millions of Americans.

He had a policy difference with President Trump regarding the country of his birth, and despite all the Democrats’ cries of “the Constitution, the Constitution”, Vindman could care less about any alleged violation of the Constitution by Pres. Trump. The gravamen of his complaint focused on the possibility that $380 million was going to be withheld from Ukraine, if the investigation into Joe and Hunter Biden’s Burisma dealings was pressed, alienating D.C. Democrats from the policy of using Ukraine as a tool against Putin and Russia. Essentially, this is a case of a Ukrainian born analyst butting into U.S. policy to ensure U.S. foreign aid continues flowing into Ukraine without objection.

After Schiff announced that the whistle blower might not even testify in a closed session, Republicans noted his motives cannot be properly assessed by the public, if he remains hidden. And Rep. Jim Jordan, head of the House Oversight Committee stated: “It’s tough to determine someone’s credibility if you can’t put them under oath and ask them questions.”

A former top National Security Council official, Tim Morrison, was on that call between President Trump and President Zelensky of Ukraine on July 25th, and Morrison states: “I want to be clear, I was not concerned that anything illegal was discussed.”

Secretary of State Mike Pompeo told reporters on October 30th, the following: “I heard the President very clearly on that call talking about making sure that corruption — whether that corruption took place in the 2016 election, whether that corruption was continuing to take place, that the monies that were being provided would be used appropriately. It was very consistent with what I’d understood President Trump and our administration to be doing all along.”

Aid to Ukraine was not withheld and most of the criticism is political opportunism from Democrats, who cared little about Ukraine, until Hillary lost the Big Brass Ring and the ticket to the White House. Trump’s only sin was not requesting anti-corruption assistance through proper channels, because Hunter Biden’s position on the board of Burisma Holdings, while Ol’ Joe was Vice-President of the United States, is a legitimate priority for U.S. and Ukrainian anti-corruption investigations. The Biden’s activities shouldn’t be swept under the rug due to the embarrassment or criminal charges for bribery it may bring some people.

President Trump blurred the line between U.S. national interests and his own personal and political interests a little, but even taking the worst-case scenario on Ukraine — a quid pro quo exchange of foreign aid for political favor — political sin or not, it certainly doesn’t arise to the level of a crime or an impeachable offense.

Any normal decent American fully understands that this is an UGLY and DANGEROUS gambit to undo the 2016 election and throw the 2020 election into turmoil, due to the Democratic Party’s realization that they will not be able to beat President Trump in a FAIR ELECTION PROCESS.

Steaming ahead like an out-of-control train, the Democrats are ignoring the common law definition and the Founders’ understanding of the limited and technical meaning of “high crimes and misdemeanors” centered around abuse of power and grave breaches of trust and the Founders’ rejection of “maladministration”. They are attempting to impeach the president, despite the absence of impeachable offenses, and they are trying to neutralize and destroy President Trump, through a list of alleged impeachable offenses that they change each time one fails to produce the desired results: In the process, they are seeking to exercise control over the president that is not authorized in the Constitution and strictly forbidden by the Framers of the Constitution, since in the absence of any real and specified criminal conduct, the only legitimate remedy for a non-impeachable president lies with the voters, not Congress.

Source links and text enclosed by brackets are by the Editor.