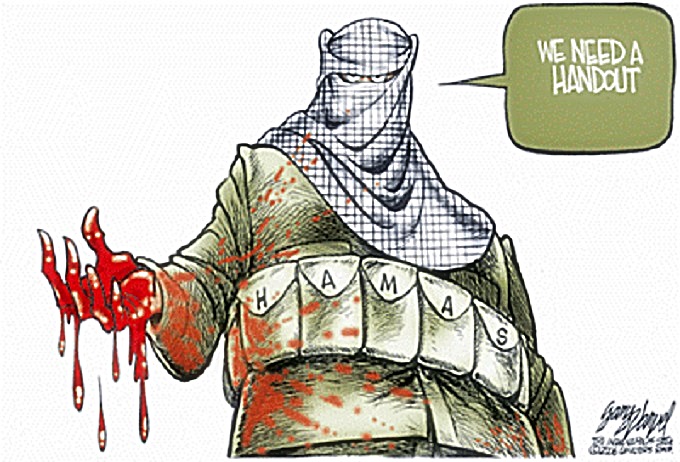 It is horrendously amazing how many Western NGOs, Western governments (via official government agencies) and the international bureaucratic apparatuses of the United Nations support the Islamic terrorist organizations of Hamas and the Palestine Authority (really controlled by the PLO [HERE, HERE and HERE). Hamas and the PA are nothing more Jew-Hatred organizations committed to the destruction of the Jewish Homeland and Jews in general. They are murderous cowards hoodwinking Multiculturalist power-brokers to unwittingly (or maybe even wittingly) to support the evil of murderous Jihad.

Since 1987, the Gaza-based terror group has kept itself in the international spotlight through acts of violence against the Jewish State of Israel. It was designated as terrorist by the Unites States in 1997. In 2006, under the guise of the “Change and Reform” party, it won the elections for the Palestinian Authority and in 2007, after violent confrontations with Fatah, took over the Gaza Strip. Since then, it has escalated its attacks against Israel.

Who helps finance Hamas ongoing terrorism against the ‘Zionist entity?’

Hamas, the Muslim Brotherhood branch in Gaza, was established in December 1987, days into the Palestinian Liberation Organization’s (PLO) first Intifada against Israel. This Sunni terrorist organization controls the Gaza Strip and imposes sharia on its constituents. Unlike the Islamic State (ISIS), which flaunts its radicalism – through their brutal abuse of women and children and indiscriminate slaughter of civilians, mostly other Muslims in Iraq and Syria, mega-attacks in Europe, and a sophisticated social media apparatus, – Hamas manages to portray itself as a victim.

Why? Because unlike impatient ISIS, whose agenda is to eliminate all infidels to create now the global Islamic Caliphate, Hamas, which prioritizes the destruction of the Jewish State of Israel, has been the recipient of direct and indirect support of some Muslims states, as well as supposedly Western-oriented organizations such as the European Union the United Nations, and even the United States. These are joined by international Muslim Brotherhood-affiliated and anti-Israeli groups and the international media. They use the guise of humanitarian aid, to assist the Hamas terrorist regime in Gaza politically and financially.

The arrival of the Internet in the late 1990s introduced a new, easily-accessible vehicle for Hamas to portray the people it exploits in Gaza as victims of Israeli retaliations rather than its own twisted ideology. The terrorist organization learned that posting photos of wounded children and crying mothers has a considerable effect in the ‘hearts’ and minds’ battle in gaining the support of the international community. Thus, far from safeguarding its own citizen’s rights Hamas’ strategy has become the maximum extraction of civilian casualties from among its constituents.

Hamas Islamist indoctrination campaigns are so successful that not only the suppressed Muslims in Gaza are ready to carry out attacks against Israel, but even the brutalized Christians that remain in the Gaza Strip, are complaining not against Hamas for banning Christmas and forcing submission to sharia, but against “Israeli occupation.”

Last month marked the celebration of the Annual Palestine Festival for Childhood and Education in Gaza throughout the Hamas-run territory’s school system, most of which is operated and funded by the United Nations Relief and Works Agency (UNRWA).  The events included young veiled girls and boys in military uniforms, simulating stabbing attacks on Israelis, killing IDF soldiers and ‘heroically’ releasing Palestinian terrorists from Israeli jails.

These events were sponsored by the Ramallah-based Bank of Palestine, UK-based Interpal Fund, and the Hamas-controlled University College of Applied Sciences in Gaza, whose funders include the World Bank and European Commission.  While many in the free world would find this link between international aid and a celebration of hatred alarming, it is the norm rather than the exception in the Hamas-ruled coastal enclave, where democratic principals [sic] are quashed and wanton hatred of Israel propagated.

The Hamas government receives funding from an array of sources, though lately fewer are doing so publically. Directly, it receives contributions from the international Muslim community, international NGOs, such as the BDS groups, and online. A good example of indirect funding is the $50 million announced by the U.S. “to provide basic humanitarian assistance and create jobs. The money will be distributed by the U.S Agency for International Development in partnership with Catholic Relief Services.” At the same time, Sweden also announced additional $8 million to UNRWA “for all Palestinian refugees.”

Hamas also receives aid through its own political adversary, the Palestinian Authority (PA), itself the recipient of international aid second only to Syria. (Palestinians are the recipients of highest per capita assistance in the world”). Funding comes from numerous international bodies, including The European Commission (EC); UNRWA; the United Nations Children’s Emergency Fund UNICEF; the United States Aid Agency (USAID), and the World Bank. These and others fund the PA to re-allocate funds to Hamas-ruled Gaza, as humanitarian aid, to create jobs, housing projects, and also in support of “good governance,” programs that failed under the PA, and funded Hamas since it took over in 2007. While there are efforts to stop aid from reaching Hamas, according to last month’s Congressional Research Service (CRS) report: “Since 2007, USAID could not “reasonably ensure” that its money would not wind up in terrorist hands.” Moreover, “UNRWA makes publicly available the names of all recipients of UNRWA contracts of annual aggregate value of $100,000 or more.” There is little doubt that Hamas is exploiting this big financial loophole to support the construction of its expanding tunnel-infrastructure under the border with Israel, for training and buying weapons, and to increase the hate-propaganda it designed to guarantee the supply of cannon-fodders for war against Israel. [***As blog editor I adjusted an editing glitch on the part of ACDemocracy for better continuity. Unless ACDemocracy fixes that glitch their webpage will appear to have an unfinished sentence circa this paragraph.]

Estimates of how much money flows into Hamastan are varied. However, as events such as the Annual Palestine Festival for Childhood and Education, and the continuing tunnel- construction rather than rebuilding Gaza’s shattered infrastructure shows, much of the funding that goes to Gaza directly and through the PA, aid Hamas’s terrorist agenda against Israel, rather than improving the lives of Gazans.

* Dr. Rachel Ehrenfeld is Director of New York-based American Center for Democracy, and author of “Funding Evil: How Terrorism is Financed and How to Stop It”, 2011

* A different, unedited version of this article was published by Israel Public Diplomacy Forum

Copyright © 2013 | The American Center for Democracy is a 501(c)(3) non-profit organization. Your contribution is tax-deductible to the fullest extent of the law.

The ACD is dedicated to exposing threats to our free speech rights, political and economic freedoms and national security.

ACD is a 501(c)(3) not-for-profit organization. All contributions are tax-deductible to the fullest extent of the law.

ACD fills an important gap created by inadequate risk assessments of our cyberspace, GPS & UTC. We use our Threatcon programs, our multidimensional Terrorist Finance Network Tracker (TFNT), and our experts to better inform government, public and private sectors’ policy makers.

“Lean and agile, ACD/EWI is always ahead of the next threat: cyber attacks, market manipulation, the use of legal structures to inhibit free speech and stifle debate”- Richard Perle, former Assistant Secretary of Defense