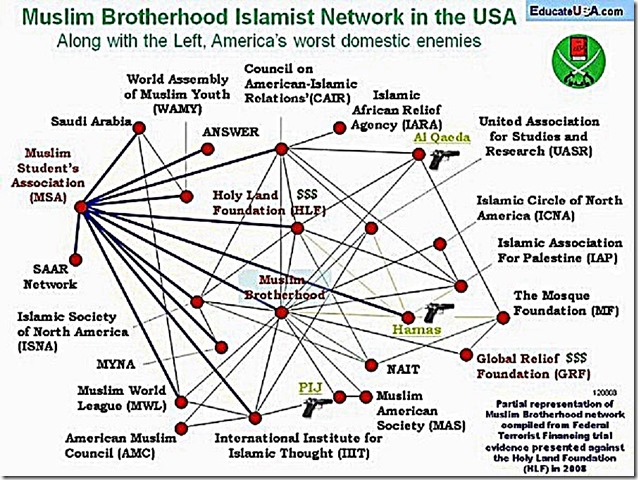 Justin Smith writes of American Christians and Congressmen that play the three monkeys – hear no evil, see no evil and speak no evil (whatever the order is). Christians in Muslim dominated nations are experiencing ethnic cleansing (or as Justin writes – religious cleansing). You may hear a peep here and there, BUT we should hear a roar of outrage over this indignity!

There is a war going on! The motivators behind Islam – i.e. those we call Radical Muslims – are determined to exact global Islamic domination. Our politicians and journalists are so fearful of being called prejudiced racists they are afraid to note the global extermination of Christians by Muslims. This politically correct fear is so extant that Radical Islam is growing in America so much that we are blinded by the Islamic self-claim that the majority of Muslims are Moderate. AND YET the majority of Mosques and American-Islamic organizations are closely related to funding from Radical Islamic interests in Saudi Arabia or aligned with the Radical Islam of the Muslim Brotherhood.

Where Are The Saints?

America in general and Christianity specifically have been under attack by Islam for the past forty years, and a renewed clash of Western civilization and Islam essentially has become a very real war, in which Jews and Christians are killed to amplify Islam’s assumed religious superiority; and yet, many prominent Christian theologians have become accomplices of jihad, by wasting precious time and resources on futile dialogues, rather than condemning and rejecting the concepts of jihad/Holy War, martyrdom and a life that begins only after death, in the face of the self-appointed leaders of Islam.

With the collapse of the Soviet Union in 1989, Islam began to march towards a new ascendancy in many parts of the world, and, in no small part, Islam’s goals have since been aided by Barack Obama’s policies, which support Muslim Brotherhood and Al Qaeda terrorists in several Islamic nations, over dictators who kept the islamofascists checked and were U.S. allies; Obama’s domestic policies also attack U.S. Christians, as seen in a military briefing on October 17, 2013 at Ft Hood, TX, when soldiers were told that Christian and Tea Party groups could be representative of right wing terrorist groups, and, the soldiers were warned to be careful of donating money to such groups, in order to avoid prosecution under the Uniform Military Code of Justice.

The persecution of Christians has increased significantly throughout the world over the past decade, especially in the 57 member nations of the Organization for Islamic Cooperation. A staggering 100,000 Christians are murdered annually within these nations, because of their faith, according to Vatican spokesman Monsieur Silvano Maria Tomassi; and, Persecution.org president Jeff King recently told FoxNews that “two-hundred million Christians currently live under persecution.”

Since 1998, thousands of Christians have been killed in Egypt, Pakistan and Nigeria, with 10,000 of those murders occurring in Indonesia alone. Egypt’s Coptic Christians have battled the worst attacks on their minority numbers since the 14th century, as seen through the Midnight Mass murders and the rioting of January 2010, after Hosni Mubarak’s removal. And, last month, Taliban suicide-bombers killed 85 worshippers at All Saints’ Church, which was founded in 1883 in Peshawar, Pakistan; Christians were also targeted by islamofascists during an attack on a shopping mall in Nairobi, Kenya, in which al-Shabaab terrorists released people who could answer questions about Islam and proceeded to kill 70 other people.

Most of Iraq’s Christians have fled the country or been murdered, since Saddam Hussein’s overthrow. In August 2004, five churches were bombed in Baghdad and Mosul. Seven more churches were bombed on one single day in July 2009, and the bombings have continued right through last week; with Assad’s regime in Syria under attack by Al Qaeda and other Islamofascist groups, much the same scenario is currently playing itself out in Syria and an increase in religious cleansing will eventually turn Syria into another base and safe-haven for the world’s islamofascists.

Christians… tortured, raped and murdered by being burned alive in fire-pits and beheaded in the most horrible fashion, as Muslims dance around their victims almost as though this is entertainment or a great noble deed. And these barbarians call themselves “civilized” and Islam “a religion of peace.”

The islamofascists have a saying, “First the Saturday People, then the Sunday People,” which means “first we kill the Jews, then we kill the Christians.” When one looks at Islam in this context, through the words of its leaders, it is baffling to see such a lack of concern, anxiety, action or advocacy on the part of Christians in the United States.

America will be hard-pressed to win this war, as long as career politicians are willing to accept $2 million dollar bribes, like the $2 million then Sen. Joe Biden accepted from Iran in 2004, and as long as universities take $26 million dollar “donations” from Islamic princes, just as Harvard did in 2006; our education system and government has become ever more politicized, and they tolerate and even encourage the rise of anti-American, anti-Christian movements based on feelings of group grievance and victimhood, as some “teachers”/propagandists direct impressionable students to observe the “numerous misdeeds perpetrated by the U.S. against third world nations,” and especially the Islamic world: This emboldens Muslims who see any U.S. compromise and conciliation as weakness and a sign of their own impending victory.

On September 12, 2006, at the University of Regensburg, Germany, Pope Benedict gave a wide-ranging lecture, titled “Faith, Reason, and the University-Memories and Reflections.” Pope Benedict proclaimed that God cannot ask one to do something unreasonable, because He created reason. Benedict further explained that Islam, on the other hand, is predicated on the idea that God may overturn law and human reason. “Allah may demand immoral or unreasonable behavior, for he is all-powerful and demands absolute submission.”

In this clash of civilizations, America needs to criticize any group, person or culture deserving of such criticism by their words and actions, especially if these actions include crimes against humanity. Americans and the Western world must drop the ethos of relativist respect for non-Western religions and cultures, especially when they do not deserve our respect and the term “respect” becomes a euphemism for “appeasement.”

One must wonder over the silence of so many Western Christians, Protestant and Catholic alike, and our pastors and ministers and government officials. As noted by Representative Frank Wolf (R-VA) in January 2013, far too many are seemingly not “pained by these accounts of persecution”, and they are not using their sphere of influence to raise the profile of this issue through sermons, articles and interviews. But, while Wolf castigated 300 Christian leaders for their “lack of engagement”, two fine Christian leaders in Murfreesboro, TN, Reverend Darrell Whaley (Kingdom Ministries Worship Center) and Pastor Alan Jackson (World OutReach Church), had already been at the forefront of this battle for quite some time.

Dr. Justin Akujieze’s words ring even more urgent now, than the day I met him (November 11, 2011), and he told a horrific, heart-wrenching story of the islamofascists essentially conquering the northern half of Nigeria. This same day, he also made an impassioned plea for his country and called for action: “Today is the last day and we must not wither. We must confront this (Islam) head-on and together we will win.”

Many of us in America recognize the cautionary tale revealed in the words of Dietrich Bonhoeffer, a Lutheran pastor, who was executed for speaking out against the Nazis: “Silence in the face of evil is itself evil. Not to speak is to speak. Not to act is to act.” And Islam today represents every bit as much evil as yesteryear’s National Socialism.

1 Corinthians 6:2- Do ye not know that the saints shall judge the world? and if the world shall be judged by you, are ye unworthy to judge the smallest matters?

All links provided by Editor