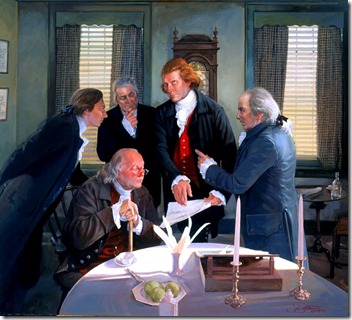 Here is an interesting American Thinker article with ideas to balance the economic ship USS Economy. In politics I am on board with the principles of balanced budgets, Free Market economics, Less Government, Less Taxes and so on. I am on board with these principles on faith more than knowledge. Frankly I am a Conservative more because of Social Conservatism, Pro-Family Values, Pro-Biblical Christian faith, a Conservative slant on First Amendment Rights, I am very Second Amendment (i.e. that of individuals to bear arms), the reinstitution of State Sovereignty according to the Tenth Amendment and so on.

When it comes to Conservative Economics or Tea Party Economics I am in a position of choosing who to trust in what is good for America. As a student of history I can read what the effect Liberal or Leftist Economics has accomplished to benefit people. That benefit is nonexistent.

Leftist Economics have the modern world’s greatest genocides into existence. The worst thing Right Wing Economics have done is exploitation of working class people by Big Business. By Big Business I mean organized markets that benefit companies and corporations more than or perhaps rather than the well-to-do that might employ them. This means in the early days of Big Business when the ruling elite of nations were most often European Noblemen or close offspring thereof, the common man was way more exploited economically and in Human Rights than what should have been morally unacceptable as members of Christian nations.

I suspect a few national revolutions changed this unequal existence between the upper class and the common man. Here are a few of those revolutions which are not exhaustive, but are from skimming the top of my humble mind:

The Magna Carter of 1215 and later revisions

Magna Carta (Latin for “Great Charter”, literally “Great Paper”) was drawn up in 1215 to limit the power of English Monarchs, especially King John, from absolute rule.

Magna Carta was the result of disagreements between the Pope and King John and his barons over the rights of the king: Magna Carta required the king to renounce certain rights and respect certain legal procedures, and to accept that the will of the king could be bound by law.

Magna Carta is widely considered to be the first step in a long historical process leading to the rule of constitutional law, much of English Common Law can be traced back to Magna Carta.

The gist of the gripe the Barons had with King John was that he had too much power and they too little.

The Barons had the populace behind them, in as much as anyone took any notice of the populace.

The deal struck between Parliament and the royal couple in 1688-89 was that Parliament would support the war against France, while William and Mary would accept new constraints on their authority. The new constitution reflected the relative weakness of William’s bargaining position more than any strength in Parliament’s position. Parliament feared the return of James, but William very much needed England’s willing support in the war against France because the costs would be extraordinary and William would be focused on military command instead of political wrangling.

·       Many, many things caused the revolution. From the economic problems, to the discontent with autocratic rule.

·       Also, the colonies were not allowed their own economy to flourish, not letting the colonials print legal tender money which also in turn, since any monies printed was not considered by the King, it made it much harder to pay royal taxes. After the Boston Tea Party, came the Coercive Acts, or the Intolerable Acts on Boston, which really upset them and made them want to take even more action, rather than just using effigies (dolls made to look like the redcoats and used to scare the redcoat’s and boycotting.

·       Reasons for American Revolution: Taxation without representation in parliament. Colonials thought the English could not control colonies from so far away. (across the pond) Money, people like John Hancock did not want to pay taxes on his goods being brought into the docks or sent to England, import and export. (Some Wiki answers listed on Answers.com)

The objective of the constitution was to create a strong elected government that would be responsive to people’s will. Although many founding fathers believed that the new government had to be insulated from the will of the people. The constitutional features were included like the Electoral College and the election of the senate by state legislatures. (From: U.S. Constitution: A Short History)

… As adopted, the Constitution included only a few specific rights guarantees: protection against states impairing the obligation of contracts (Art. I, Section 10), provisions that prohibit both the federal and state governments from enforcing ex post facto laws (laws that allow punishment for an action that was not criminal at the time it was undertaken) and provisions barring bills of attainder (legislative determinations of guilt and punishment) (Art. I, Sections 9 and 10).  The framers, and notably James Madison, its principal architect, believed that the Constitution protected liberty primarily through its division of powers that made it difficult for an oppressive majorities to form and capture power to be used against minorities.

… In the ratification debate, Anti-Federalists opposed to the Constitution, complained that the new system threatened liberties, and suggested that if the delegates had truly cared about protecting individual rights, they would have included provisions that accomplished that.  With ratification in serious doubt, Federalists announced a willingness to take up the matter of  a series of amendments, to be called the Bill of Rights, soon after ratification and the First Congress  comes into session.  The concession was  undoubtedly  necessary to secure the Constitution’s hard-fought ratification.

James Madison was skeptical of the value of a listing of rights, calling it a “parchment barrier.”  … Despite his skepticism, by the fall of 1788, Madison believed that a declaration of rights should be added to the Constitution. Its value, in Madison’s view, was in part educational, in part as a vehicle that might be used to rally people against a future oppressive government, and finally–in an argument borrowed from Thomas Jefferson–Madison argued that a declaration of rights would help install the judiciary as “guardians” of  individual rights against the other branches. …

Some members of Congress argued that a listing of rights of the people was a silly exercise, in that all the listed rights inherently belonged to citizens, and nothing in the Constitution gave the Congress the power to take them away.  It was even suggested that the Bill of Rights might reduce  liberty by giving force to the argument that all rights not specifically listed could be infringed upon.  In part to counter this concern, the Ninth Amendment was included providing that “The enumeration in the Constitution of certain rights, shall not be construed to deny or disparage other rights retained by the people.” …

In the end, we owe opponents of the Constitution a debt of gratitude, for without their complaints, there would be no Bill of Rights.  Thomas Jefferson wrote, “There has just been opposition enough” to force adoption of a Bill of Rights, but not to drain the federal government of its essential “energy.”  George Washington agreed: “They have given the rights of man a full and fair discussion, and explained them in so clear and forcible manner as cannot fail to make a lasting impression.” (Excerpted from: The Bill of Rights: Its History and Significance)

The French Revolution took a different path of bringing balance between the common man and the upper class. That path was bloody and little to do with offering Liberty and more to do eliminating the French Nobility Class including the French Monarchy with death sentences to transform French society from a nation of an entitled ruling class to an egalitarian Republic. The difference between the Republic of the United States of America and the French Republic are that the rights of man applied to all classes (at least in theoretical law) in America while the rights of man in France were based on fear of the French Republic government rooting out French Nobles (i.e. outright despotism).

The American Thinker article mentioned at the beginning of this post has to do with utilizing the tools the Founding Fathers left as a heritage and legacy of regrouping in potential perilous times. There are three authors to this essay: Raymond Richman, Howard Richman, and Jesse Richman. They postulate utilizing tariffs as a means of America equalizing trade with nations that undercut American production with cheap labor producing less expensive products. Then they postulate eliminating corporate income taxes in favor of sales taxes or Valued Added Taxes to encourage Corporations to keep their financial homes in America as well as foreign Corporations establishing American divisions in America. I’ll leave the details of these three author’s thoughts for you to read. The goal is to bring up employment in America which means an infusion of money into the economy which means economic growth.