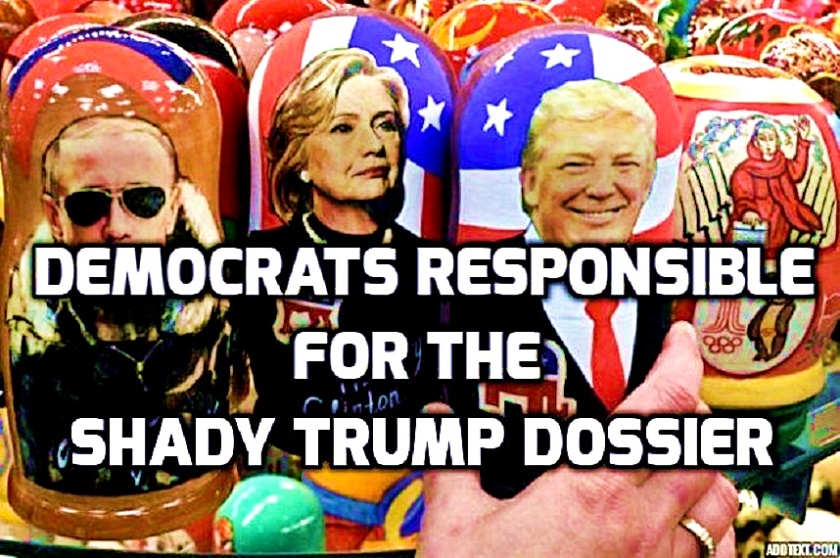 Stefan Molyneux spends about an hour breaking down what I have heard as the Trump Dossier. Molyneux calls it the “Gold Showers Dossier”. Molyneux briefly describes what’s in the dossier then breaks down of the failure to connect it to President Trump then on connections to Fusion GPS, the Dems and Crooked Hillary.

VIDEO: The Truth About The Fusion GPS Dossier Collusion Scandal

We Need Your Support: http://www.freedomainradio.com/donate

The now-infamous “Golden Showers” dossier has Fusion GPS in the spotlight as serious questions are raised about who funded the largely discredited or unverified allegations against Donald Trump and his campaign associates.

In April 2016, the Hillary Clinton Campaign and the Democratic National Committee used lawyer Marc Elias to retain and fund Fusion GPS for opposition research, leading to the “Golden Showers” dossier.

In June 2016, former British intelligence officer Christopher Steele and his company Orbis Business Intelligence are hired by Fusion GPS to specifically investigate Trump’s possible connections to Russia. What is the truth about the Fusion GPS dossier collusion scandal?

Your support is essential to Freedomain Radio, which is 100% funded by viewers like you. Please support the show by making a one time donation or signing up for a monthly recurring donation at: http://www.freedomainradio.com/donate

Get more from Stefan Molyneux and Freedomain Radio including books, podcasts and other info at: http://www.freedomainradio.com

Some photos I ran into while browsing this issue: 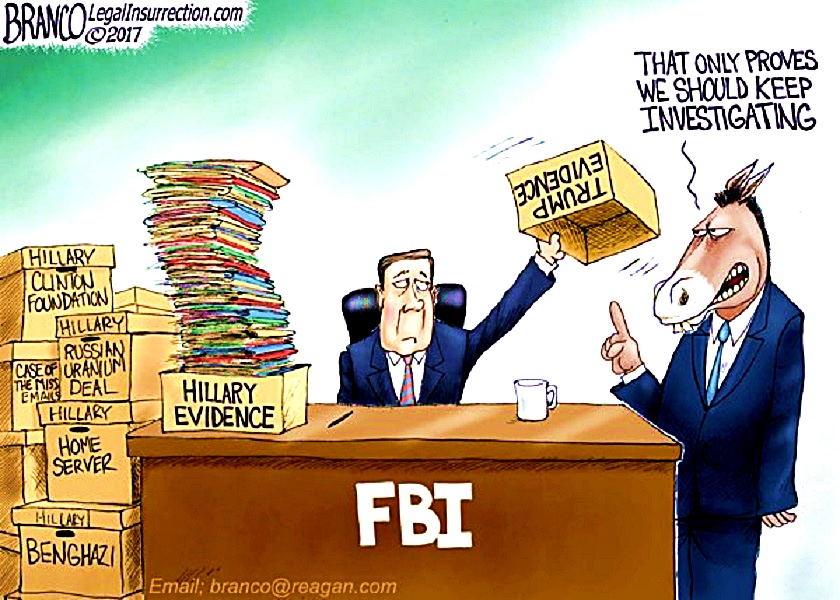 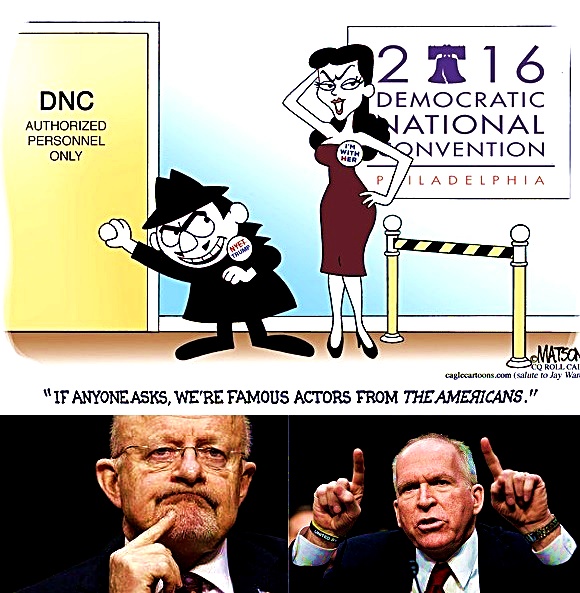 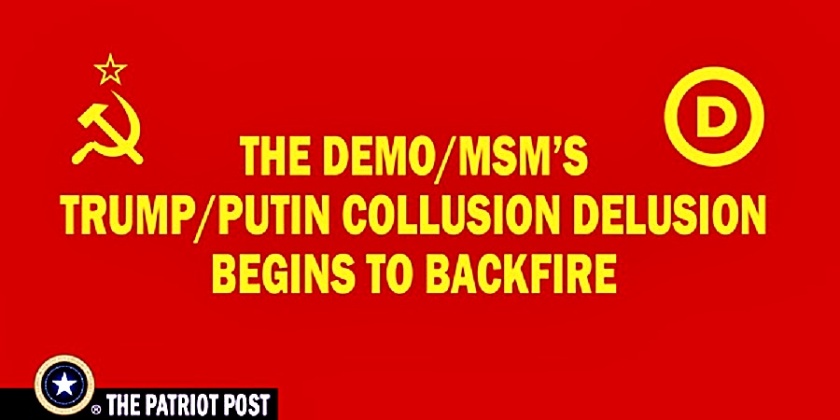 Have you ever heard of Emanuel Kidega Samson? Do you know much the shooting at Burnette Chapel Church of Christ in Antioch, TN (just outside of Nashville)?

According to leaked info of a letter found in Samson’s car, Samson went on a shooting rampage at the small Church in retaliation for White Supremacist Dylann Roof’s shooting rampage against predominantly Black congregants of Emanuel African Methodist Episcopal Church in Charleston, SC.

Here’s the thing though. As of this post, the police are mum about Samson’s motive for shooting up a racially diverse small Church in Tennessee and are mum to the contents of the found letter as well. The lack of info to date is leaving only speculation behind the motive for a shooting that killed a White woman and wounded seven others.

Here is the salient point that the Leftist Mainstream Media (MSM) seems to be not clearly reporting. The MSM clearly and correctly labelled Dylann Roof a racist White Supremacist yet failed to also report on his emotional issues. In the case of the murderer Samson, this is nearly ZERO reporting of probable racism involved but a lot of reporting on his troubled emotional life. Contrast this with MSM seeming support for racist Black Lives Matters racism/Marxism and hatred of police.

Interestingly, the Stefan Molyneux Youtube channel sourcing of Got News gives ample information to bring a solid inference as to the murder-motive behind Emanuel Kidega Samson’s shooting spree.

This is how I’m going to lay out this sourced info for you to come to a more effective conclusion than the MSM is willing to give you:

VIDEO: The Truth About The Tennessee Church Shooting and Emanuel Kidega Samson

We Need Your Support: http://www.freedomainradio.com/donate

On September 24th, 2017 at approximately 11:15 am, 25-year-old Emanuel Kidega Samson targeted the Burnette Chapel Church of Christ in Antioch, Tennessee. Wearing a neoprene ski mask and carrying two pistols, Samson fatally wounded Melanie Smith Crow, 39, in the church parking lot, before entering the church and opening fire into the crowd of 42 patrons – wounding 6 others between the ages of 60 and 83.

Church Usher Robert Engle confronted the shooter and was pistol-whipped before Samson shot himself during the skirmish. With the suspect disabled, Engle is reported to have retrieved a legal firearm from his vehicle and guarded the shooter until police arrived on scene. Originally from Sudan, Emanuel Kidega Samson was brought to the United States in 1996 when he was only 5 years old. Samson is a legal United States resident, but not necessarily a U.S. citizen. Samson will be charged with both murder and multiple counts of attempted murder.

Your support is essential to Freedomain Radio, which is 100% funded by viewers like you. Please support the show by making a one time donation or signing up for a monthly recurring donation at: http://www.freedomainradio.com/donate

Get more from Stefan Molyneux and Freedomain Radio including books, podcasts and other info at: http://www.freedomainradio.com

Melanie Smith Crow’s Funeral was held on Thursday. Mr. Popovich, I am sure her entire family is very uncomfortable. Happy?

Emanuel Kidega Samson came to America from Sudan when he was 5 years old. Our country provided Samson the opportunity to obtain an Associates Degree in Psychology at Motlow State University. Mr. Samson had previously attended Burnette Chapel Church, in Antioch, Tennessee as a guest, before he decided to return to it and commit his act of domestic terrorism. As you read the details below, make sure to take note that Samson had previously shared and commented on videos from those that supported Sharia Law. You can draw your own conclusions from that.

Below is a description of events that occurred on September 24, 2017. As you read them, ask yourself: Why hasn’t the race-baiting MSM reported on this? Instead, they are obsessed with defending the rights of spoiled-brat football players, and their right (as predominantly black men), to trample on our flag, president, culture, citizenry and way of life.

Stefan Molyneux lays out the facts, as well as the philosophical argument why letting these people into our country will continue to inspire the well planned (and well funded) race war. If you don’t have time for a video, I have posted the information below. 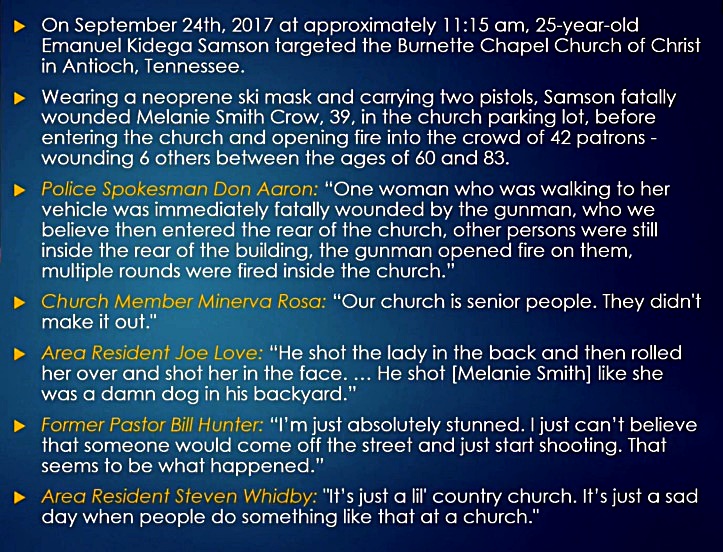 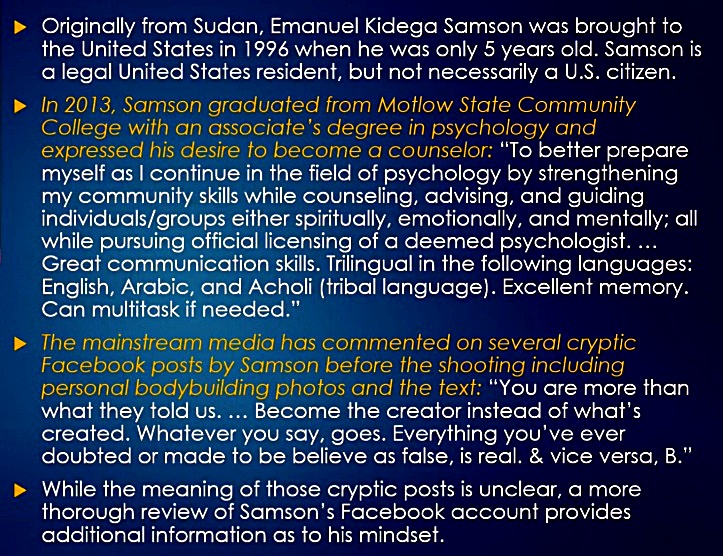 BREAKING: #Antioch Shooter Is Black Power Radical Who Posted That “You’re More Likely To Be Killed By A White Man”

The Antioch, Tennessee church shooter is an immigrant from Sudan and black power radical with a history of sharing pro-Islamic and anti-Western posts on social media, a review of his Facebook and Twitter accounts reveals.

Before 25-year-old Emanuel Kidega Samson opened fire on churchgoers in Antioch, Tennessee today, he shared a variety of Black Power and anti-police propaganda on his personal Facebook page. In addition, he shared a number of pro-Islamic posts, including a video in which a Muslim activist defends Sharia law. Moreover, Samson frequently shared anti-west posts, at least one of which praised Zimbabwean dictator Robert Mugabe’s wealth confiscation efforts.

On July 8th, 2016, Samson shared a link from a website titled “New Generation Back Council” that falsely claimed “Police Murder a black Panther General execution style and try to cover it up June 23rd 2016.”:

And just last month, Samson shared a post that implied citizens shouldn’t trust police because an account purporting to be an assistant chief of police had shared a racially insensitive meme:

February 27th, Samson, whose Facebook indicates he’s from Khartoum, Sudan, shared a video from Mic that declared “You’re more likely to be killed by a white man than a Muslim terrorist.” On March 2nd, he shared a video from Vox co-founder Ezra Klein warning viewers not to ignore the threat of “white extremism”:

On February 17th, Samson shared a video of Muslim activist Yasmeen Abdel-Magied defending Sharia law against Australian Senator Jacqui Lambie. Samson wrote “You can’t converse with some people, that’s the unfortunate truth. Folk will accept what you have to say when they want/ready to.”:

On July 29th, 2016, Samson shared a video titled “Zimbabwe is taking its diamonds back,” and explained that its dictator Robert Mugabe had “announced that the state will now own all diamonds in the country.” Samson praised Mugabe, whose regime has murdered thousands of civilians and confiscated private property from its citizens of European descent. Samson wrote “Bossman, Bobby back at it again.”:

In another post from February 6th, Samson shared a video that proclaimed “The West Helped Ruin/Continues To Destroy Africa By Providing Loans That African Countries Can’t Afford After They Robbed Africa For 400 Yrs.”:

The Truth About The Tennessee Church Shooting and Emanuel Kidega Samson

Freedomain Radio is the largest and most popular philosophy show on the web, with over 250 million downloads and is 100% funded by viewers like you. Please support the show by making a one time donation or signing up for a monthly recurring donation. https://freedomainradio.com/donate

BREAKING: #Antioch Shooter Is Black Power Radical Who Posted That “You’re More Likely To Be Killed By A White Man”

“I don’t believe in being a bitch for power.” — Chuck Johnson.

Got News seeks to transform journalism by empowering everyday people, experts, and sources to break news and get rewarded for their effort.

Got News is in the first stage of its rollout where we will publish our own stories as well as those of select researchers and citizen journalists. In stage two members will join the site and start posting stories to earn income based on their web traffic.

Investigative journalist and author Charles C Johnson got the idea for Got News when he stopped writing for other outlets in January 2014. Johnson was frustrated with the lack of serious investigative journalism, and the adversity to risk of the national media, with the constant “stenography” of DC and NYC media who cozied up to power rather than spoke truth to it.

Johnson recognized that most published stories were only partially true, while other important stories were never told at all. Meanwhile Johnson received a constant stream of information from part time researchers around the country who were eager for an outlet for their work. And yes, the rumors are true. I do sometimes pay my sources.

“I invite you to join the revolution and change the world,” says Johnson.

Please email us at editor@gotnews.com if you’d like more information.

Gotnews.com founder and editor-in-chief Charles C. Johnson is an investigative journalist, author, and sought after researcher.

He has been profiled in the Washington Post, Politico, The New York Times, Mother Jones Magazine, and … READ THE REST