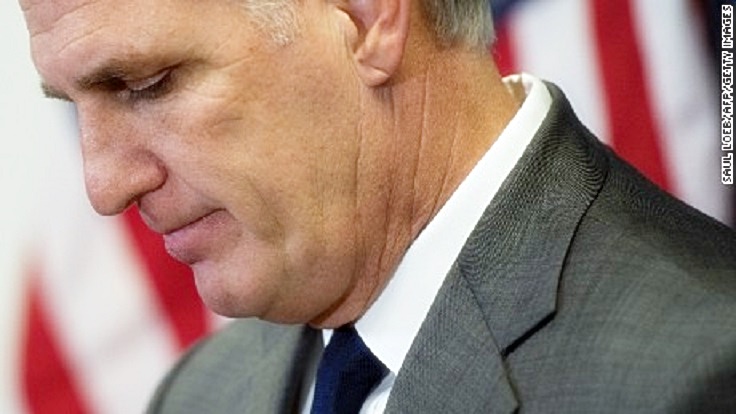 In case you havent heard Rep. Kevin McCarthy (R-CA) shocked the GOP Establishment by taking his hat OUT of the ring for Speaker of the House. Rep. McCarthy had a reputation of being more RINO than Speaker Boehner. The FireMcCarthy.com website writes this on their main page about Rep. McCarthy:

Rep. Kevin McCarthy is a “nice guy” but that doesn’t mean he is qualified or conservative enough to lead the people’s House. Just like John Boehner, McCarthy scores terribly with conservatives.

o Conservative Review gave him a score of 45.

He scores worse than former Majority Leader Eric Cantor, who lost his own district. Conservatives havent forgotten this. If McCarthy is chosen, well see that hes fired. Add your name to the list of Americans who Demand a Conservative Speaker.

Now I strongly suspect the name of FireMcCarthy.com will change according to whom the GOP Establishment pushes for the next Speaker. I pray that the Republicans can agree on a more principled Conservative that the Establishment can feel they can work. IF NOT, then it may be time to split from or boot out the RINOs to give voters a more reliable choice other than a deceptive Establishment Republican or evil change-America Democrat.

Kevin McCarthy Drops Out of House Speaker Race: Its Best We Have a New Face

Rep. Kevin McCarthy, R-Calif., has ended his bid to become the next speaker of the House of Representatives.

McCarthy, the current GOP majority leader, was the leading candidate among the three Republicans seeking the job. However, he lacked the 218 votes needed to win a vote on the floor after the conservative House Freedom Caucus endorsed Rep. Daniel Webster, R-Fla. Rep. Jason Chaffetz, R-Utah, is also running for the job.

I am not the right person to lead at this moment, McCarthy reportedly told his Republican colleagues at a meeting today. He elaborated at a press conference Thursday afternoon.

House Majority Leader Kevin McCarthy dropped out of the Republican race for Speaker of the House on Thursday and addressed the move at a brief afternoon news conference.

I dont want make voting for speaker a tough one, McCarthy said. I dont want to go to the floor and win with 220 votes. I think the best thing for our party right now is that you have 247 votes on the floor. If we are going to be strong, we have to be 100 percent united.

He added, I just think its best we have a new face.

We’re public servants. I have always put this Conference and Country ahead of myself. We need to unite behind one leader and get to work.

McCarthys decision forced Republicans to postpone todays speaker election. Speaker John Boehner, who will resign Oct. 30, said in a statement that he would stay on as speaker until a new person is chosen. The speaker does not have to be a member of Congress.

The news apparently stunned members of Congress who were in the room with McCarthy. Rep. Darrell Issa, R-Calif., spoke to reporters afterward to explain what happened. Issa said McCarthy would like to remain in his majority leader post.

Chaffetz, who currently leads the House Oversight and Government Reform Committee, told reporters he remains a candidate for speaker.

We need to have a lot more family discussion because we need to find somebody that our whole body can unite behind, and do what we were elected to do, Chaffetz said. I was absolutely stunned, surprised, and shocked that this happened, but our conference is going to have to do a lot of deep soul-searching and well see what happens.

Webster, who has the backing of the 40-member Freedom Caucus, stressed that he would remain committed to improving the way the House operates.

A lot of members would like to see us modify in some way the rules and then use them, Webster said. Right now we dont use our rules. We circumvent them every day and thats the problem.

Several Republicans voiced their reaction to the McCarthy news on Twitter:

Democrats, who will likely support House Minority Leader Nancy Pelosi for speaker, used the opportunity to attack their political adversaries.

Rep. Paul Ryan, R-Wis., who was going to nominate McCarthy at todays meeting, reiterated he would not seek the job himself.

Kevin McCarthy is best person to lead the House, and so Im disappointed in this decision. Now it is important that we, as a Conference, take time to deliberate and seek new candidates for the speakership. While I am grateful for the encouragement Ive received, I will not be a candidate. I continue to believe I can best serve the country and this conference as Chairman of the Ways and Means Committee.

Another Republican, Rep. Trey Gowdy of South Carolina, said he was uninterested in the job. Gowdy is currently leading the Houses Benghazi investigation, which became an issue for McCarthy after he suggested the House investigation had hurt former Secretary of State Hillary Clintons poll numbers. McCarthy apologized for his comments and told reporters Thursday those comments were a factor in his decision.

Yesterday, at the monthly Conversations with Conservatives event on Capitol Hill, The Daily Signal interviewed lawmakers about their expectations for the next speaker:

VIDEO: What 6 House Conservatives Want From Their New Speaker

Published by The Daily Signal

At the monthly Capitol Hill gathering Conversations with Conservatives, six lawmakers gave their take on the leadership fight and shared what they want from their new speaker.

In the lead up to todays meeting, the Freedom Caucus, which is credited with pressuring Boehner to retire early, vowed to band together as a group and vote for Webster as a powerful voting bloc.

Rep. Dave Brat, R-Va., mentioned upon leaving the meeting that everyones surprised and reiterated again that the Freedom Caucus, and other conservatives, are calling for a more open legislative process, where rank-and-file lawmakers could put bills and amendments on the House floor and have a larger say in picking committee chairmen.

I dont view it that way [as a victory], he added. I want the conference and the country to make progress.

Brat noted that several policy issue confront Congress, including a debate over the debt limit, government spending, and Russias airstrikes in Syria.

It was about principle over power, King said, It was about overhauling this House, and turning this pyramid of power upside down, and letting the members be in charge, and running things through the regular order.

Gohmert, who challenged Boehner for speaker in January, added, We need a speaker who allows the Members of the House to participate.

Melissa Quinn and Josh Siegel contributed to this story.

McCarthy says NO as Speaker

Kevin McCarthy Drops Out of House Speaker Race: ‘It’s Best We Have a New Face’

Rob Bluey is editor in chief of The Daily Signal, the multimedia news organization of The Heritage Foundation. Send an email to Rob.

About The Daily Signal

The Daily Signal delivers investigative and feature reporting and the most important political news and commentary. The team is committed to truth and unmatched in knowledge of Washington’s politics and policy debates. We tell these stories in formats that respect your time and intelligence.

VIDEO: What Is The Daily Signal?

Published by The Daily Signal

We know you’re busy. And we’re quite certain you care deeply about the future of our country.

We care, too. We care about your communities, your families, and how Washington’s decisions are going to impact you.

More and more people are … READ THE REST