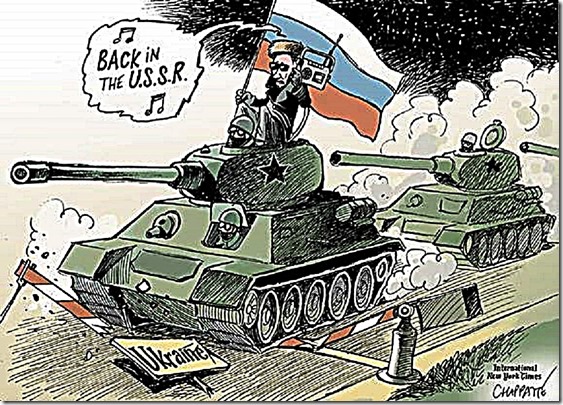 Did you know NATO members are making military deals with Russia while that nation’s President Vladimir Putin is slowly carving up Ukraine for the new Russian Empire? In case you are too young let me remind you that NATO was formed after WWII specifically to present a united front against the Russian dominated Soviet Union. That old USSR was really a Communist Empire that incorporated independent nations by force to be under Russian Communist sovereignty. As soon as the Communist system of the Soviet Union collapsed all those former Socialist Republics separated politically from Russia establishing independence as sovereign nations. Ukraine IS one of those nations.

As American voters should we allow our political leaders to continue sharing military whether by sales or donation with a reasserting Russian Empire?

Ukrainian soldiers and police remain willing to make the ultimate sacrifice to fend off Russia’s attempts to take over eastern Ukraine — last week, seven Ukrainian soldiers were killed and another seven wounded when they were ambushed by separatists near Kramatorsk.

But so far, beyond hoping for some kind of face-saving diplomatic solution, U.S. leadership has been nearly nonexistent. In fact, while Russia attempts to carve up Ukraine, some NATO allies continue to assist Russia with weapons sales and logistical support for the Russian navy.

Spain continues to allow Russian naval vessels to use its cities along the coast of North Africa to refuel and resupply. Some of the same Russian navy ships that have docked in Spanish territory have sailed aggressively close to the coasts of other NATO allies, including, most recently, the United Kingdom.

NATO is suffering from a lack of leadership. The United States must recommit itself to transatlantic security and develop realistic policies for U.S.-Russia relations moving forward. Vice President Joe Biden is on a four-day trip to Europe, in which he will visit Romania and Cyprus. On his trip, he must carry two strong messages to our allies in NATO:

o   The United States is wholly committed to the NATO alliance, especially to the territorial integrity and sovereignty of allies in Eastern Europe.

o   NATO member states giving assistance to the Russian military is entirely unacceptable and should be halted immediately.

Deterring Russia’s aggression against NATO allies in Eastern Europe requires a strong, united front. It is past time for our allies in Western Europe to stop assisting the Russian military and to stand in unison against Moscow’s aggression. So far, the Obama administration has failed to show real leadership on the crisis in Ukraine. Convincing our allies to stop supporting the Russian military seems like a good place to start.

The Foundry: Conservative Policy News from The Heritage Foundation