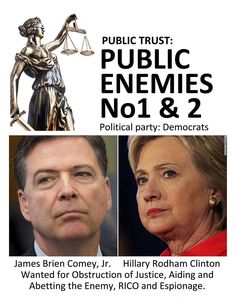 Over the last few days I have posted some info that shows Comey, his FBI or both involved not only in a cover-up to protect Obama and Crooked Hillary’s hindquarters but also to make Crooked Hillary untouchable enough to get elected. Shades of Obama Administration 2012 Benghazi lies to reelect Barack Hussein Obama.

Here are some examples of Comey corruption from those two posts:

The more that details about the FBI’s investigation into Hillary Clinton’s email practices come to light, the more their efforts appear to have been a sham designed to exonerate her of wrongdoing from the very beginning. …

Upon further review, it appears that Mr. Comey’s investigation was highly unusual, given the five immunity agreements that were handed out. …

“Instead of asking Attorney General Loretta Lynch to revoke his immunity deal and squeezing him, Comey let [Combetta] go because he was a ‘low-level guy,’ he testified at the House hearing. …

… Comey insisted that the immunity agreement was necessary to ensure that the FBI got the facts.

To add insult to injury, the FBI allowed Samuelson and Mills to sit in on Hillary Clinton’s interview with the bureau.

Gowdy was after a document called a 302, which is essentially a summary of interviews of key witnesses. The FBI wasn’t giving those to Congress, and instead was getting a “summary of a summary of an interview” instead. This is something the Committee, and Gowdy in particular, was not pleased with. …

Once again, he fumbled through another session, trying to explain away the reasons why he overlooked Hillary Clinton’s criminal behavior.

Suspicions were raised when the FBI handed out five grants of immunity to Hillary’s underlings – including former Chief of Staff Cheryl Mills, who was the mastermind behind the private server.

Many wondered why immunity was given to so many people and no charges were filed.

“GOP lawmakers focused in particular on the Justice Department’s decision to give a form of immunity to Clinton lawyers Cheryl Mills and Heather Samuelson to obtain computers containing emails related to the case.

“Laptops don’t go to the Bureau of Prisons,” Rep. Trey Gowdy (R-S.C.) said. “The immunity was not for the laptop, it was for Cheryl Mills.”

The FBI director repeated an explanation he gave for the first time at a Senate hearing Tuesday, that the deal to get the laptops was wise because subpoenaing computers from an attorney would be complex and time consuming.”

NOW I FIND OUT that the immunity deals were based ONLY on a limited search AND that after the limited search the laptops were to be destroyed by THE FBI! Here’s the story.

Sources from the House Judiciary Committee told Fox News Monday that the immunity deals struck with Hillary Clinton’s top aides, Cheryl Mills and Heather Samuelson, included the Justice Department agreeing to destroy their laptops after they had been turned over to federal investigators.

The House Judiciary Committee sent a letter Monday to Attorney General Loretta Lynch inquiring about the arrangement, and why it also included a limited search of computers files dating no later than Jan. 31, 2015.

“Please explain why DOJ agreed to limit their search of the Mills and Samuelson laptops to a date no later than January 31, 2015,” Committee Chairman Bob Goodlatte wrote in the letter, which was first reported by Fox News.

Goodlatte states that the agreements, which were signed on June 10, meant that investigators could not review documents after the email server became public and they abandoned “any opportunity to find evidence related to the destruction of evidence or obstruction of justice related to Secretary Clinton’s unauthorized use of a private email server during her tenure as Secretary of State.”

“Why was this time limit necessary when Ms. Mills and Ms. Samuelson were granted immunity for any potential destruction of evidence charges?” he added.

It was revealed last month that the DOJ granted Mills and Samuelson immunity for any information recovered from their laptops.

The House Oversight Committee exposed the immunity agreements publicly, and it raised questions about why two Clinton aides were given permission to sit-in with Clinton during her July interview with the FBI.

The FBI claimed that because the interview was voluntary, the investigators had no control over who Clinton brought with her.

“Doesn’t the willingness of Ms. Mills and Ms. Samuelson to have their laptops destroyed by the FBI contradict their claim that the laptops could have been withheld because they contained non-relevant, privileged information? If so, doesn’t that undermine the claim that the side agreements were necessary?” Goodlatte wrote.

Last week, FBI Director James Comey said that he agreed to grant immunity because he wanted to avoid a drawn-out legal battle, but he also failed to mention that part of the “agreement” was for the laptops to be destroyed.

After the news of the laptops being destroyed broke, Twitter users expressed their contempt for how the case has been handled.

BREAKING from Catherine Herridge: FBI made side deals with 2 HRC associates to “destroy” their laptops after inspecting them

@ShannonBream I am soooooooooo sick of this corrupt “administration” I am getting physically ill.

BREAKING from Catherine Herridge: FBI made side deals with 2 HRC associates to “destroy” their laptops after inspecting them

“Like many things about this case, these new materials raise more questions than answers,” Coodlatte concluded.

Western Journalism is a news company that drives positive cultural change by equipping and informing people with truth. It hosts WesternJournalism.com, a news website and blogging platform built for conservative, libertarian, free market and pro-family writers and broadcasters. The platform hosts hundreds of bloggers, and our content is widely distributed using social media. New blogs are able to be successfully launched using the platform because of the large audience actively served.

WesternJournalism.com is a property of Liftable Media Inc., a Top 100 digital publisher in the U.S. (Quantcast).