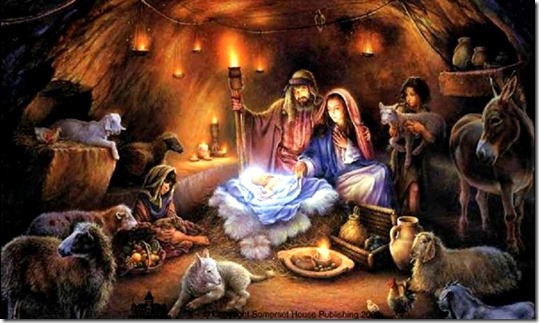 There has been an open war by Leftists and atheists on Christianity for some time in the USA. Thanks to Madalyn Murray O’Hair (focus on Communist Connection), the Supreme Court reinterpreted the Establishment (or is it Disestablishment [Full PDF of link]) Clause of the First Amendment to go beyond preventing the government from establishing a State Church but to include that anything representative of taxpayer money must exclude Christianity. The annual Christmas period of the year is when this war on Christianity seems to rear up on a national basis in the media. Hence the war on Christianity becomes the war on Christmas.

Too many Corporations (AFA 2012 Naughty or Nice List) operate stores that have fallen prey to the concept that it is politically incorrect to promote Christmas because it promotes Christianity. AND any promotion of Christianity might be offensive to a minority of people in the USA that would prefer to distant themselves from any open association with Christianity; e.g. atheists, Muslims, Jews and perhaps other identifiable anti/non-Christian entities. This PC marketing is idiotic and an insult to the majority of Americans that relish the Christmas season as a time of giving, compassion and just a downright period of joy. I mean Americans who are not particularly religiously observant of the Christian faith still make this a time of family get together and enjoy an interruption from the daily tasks of the old J-O-B.

Corporations do have a Constitutional right to utilize whatever marketing strategy they deem fit; however as a Christian I find it nauseating when Christianity is the focus of diminishment to accommodate some foolish PC concept of multicultural diversity. Even more nauseating though is when Leftists and atheists impose their sanitized and/or ungodly beliefs on those that embrace Christianity via the taxpayer support Public venues. The imposition is exacted by using “Living Constitution” (Constitutionalist Criticism) parameters rather than “Original Intent” (In support of Original Intent – Neutral Explanation) parameters in the Constitution to make sure the bedrock of America’s morality is not supported whatsoever. The result of this legal ploy of redefining the meaning of the Constitution has successfully turned America into which families are divided, single parent families are as common as heterosexual families, homosexuals are allowed to raise children further warping the societal fabric and a host of other deviations I am certain you can think of that escape my memory as of this writing.

The result of this moral dilution in America’s family unit has led to a society in which public dishonesty overrules the decency of honesty, children need protected on their routes to and from school, armed guards are becoming common place on Public School grounds, children bring weapons to harm others singularly or on a multiple basis, children are told they cannot play traditional play acting any longer (such as cops and robbers, cowboys and Indians, etc.) because imaginary weapons may inspire real weapons, childhood aggression is increasingly common (such as bullying – physical or cyber), underage children – most often teenagers – are increasingly enabled on a parental level to participate in rabble-rousing partying that includes drinking, sex, property destruction, drugs, teen pregnancy and MORE.

These societal behaviors are a direct result of the Leftist and atheistic assault to prevent Christianity from being an integral part of American Culture in the name of Multicultural Diversity.

The first anti-Christmas story I heard this was a Public School imposing restrictions on an annual High School Christmas Carol Concert due to concerns of a phrase that is found NO WHERE in the Constitution called Separation of Church and State. Here is a good synopsis of how this anti-Christmas story developed:

The state of Wisconsin once again sits center stage in the War on Christmas. The Wausau School District has issued an edict about Christmas music that has caused several school associated music groups to either disband or cancel December performances.

Phil Buch, who has directed Wausau West High School’s choral programs since 1981, said the decision to halt rehearsals for the Master Singers was made after a meeting Thursday with district officials and Frank Sutherland, an attorney who represents the school district.

Buch said district administrators gave music educators at Wausau schools three options for December concerts, which typically contain a significant amount of religious music: choose five secular, or non-religious, songs for each religious song performed; hold a concert and have no holiday music whatsoever; or postpone any concerts in December. Because the 20-member Master Singers group is invited to sing at nearly a dozen holiday concerts each year, Buch said, those options were unacceptable.

“This group sings at Christmas programs,” Buch said. “We sing for nursing homes, grade schools, businesses. To do that without Christmas music doesn’t make sense.”

District administrators did not return calls Friday seeking information about the rules, but Wausau School Board President Michelle Schaefer said the change in direction stems from legal concerns over the amount of religious music performed in the schools. The decision will not eliminate religious music altogether but will give teachers a better idea as to how much religious music is “too much,” Schaefer said.

“From a School Board perspective, we look for music that is balanced,” Schaefer said. “Yes, we are a predominantly Christian society, but we are also a society of many faiths, and we want to respect that.”

I actually first heard this story on Fox News but the below story is an excellent synopsis. This first shot over the bow against Christmas has an early victorious ending. Evidently once this story went viral the School Board relented on this attack on the Christian faith. Here is a story I found about this victory in Jesus.

We reported the story last Sunday — the media ran with it Tuesday. By Wednesday Freedom From Religion Foundation got in on the act. It appears to be the first big national story in the War on Christmas 2013.

In an update after a late Thursday meeting with the school district students and parents are claiming victory and that the Christmas concerts are now back on — with traditional Christmas music put back in place.

Here’s the issue: without warning the choir director at West High School in Wausau, Wisconsin was called to discuss plans for the upcoming music events to be held in December. It was reported early on that Wausau schools three options for December concerts, which typically contain a significant amount of religious music: choose five secular, or non-religious, songs for each religious song performed; hold a concert and have no holiday music whatsoever; or postpone any concerts in December. The choir director was outraged and in response he opted not only to cancel concerts — he disbanded the music groups who would traditionally perform.

The school district claims it is merely making sure they don’t violate the establishment clause of the U.S. Constitution (because educators in Wisconsin have SUCH a great track record with constitutional issues). They also say now they never came up with the plan to perform a certain amount of secular songs for every religious song performed. They claim that was a “misunderstanding”.

Needless to say, as with many battles we’ve seen before about Christmas in public schools, this one too will end with someone being very unhappy.

Freedom from Religion Foundation president Annie Laurie Gaylor claims no responsibility in this latest fight but was quick to pitch in with FFRF’s support of the school district:

“There can be a fine line, and we understand in some instances there can be sacred classical music in the schools, but it’s so easy for something like this to turn into a message of indoctrination. When you have a chorus going out to 15 places to sing religious music, it really does give the appearance that the school is celebrating Christianity.”

Yes, Christianity as gained so many converts over the decades by going to nursing homes to sing “Silent Night”.

The tip off of a problem was that the school choir director met with school district officials with an attorney present. In other words, they were ready for a fight.

According to a story on The Blaze tonight, the choir director at West High is known for his religious nature.

All this intense attention to the issue appears to have been resolved as of late Thursday. The Wausau School District has backed off on the requirements and have left the decision of local program content to school principals.

Oh, and by the way, where exactly in the Constitution is the establishment clause?

Another silly chapter in the War on Christmas.

(I am glad that this all got cleared up but I really wish people would get it through their heads that there is no such thing as an “establishment” clause. There is a “Government shall make no law” clause. And it only applies to the Congress. Leave my Christmas alone! If you don’t like it, don’t celebrate it. Just don’t ruin it for everyone else!

The Season is Emerging to Battle Against Christianity