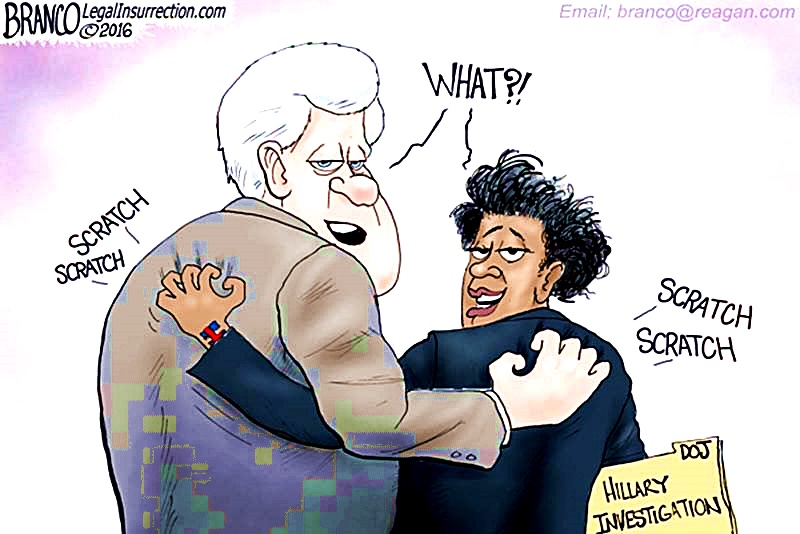 Rep. Louie Gohmert provides another reason FBI Director James Comey notified Congress that he was reopening the Crooked Hillary investigation. That reason had less to do with conscience and more to do with concern about perjuring himself in Congressional testimony addressing Comey’s previous decision not to recommend prosecution.

GOHMERT EXPLAINS WHY COMEY HAD TO NOTIFY CONGRESS

While many Democrats publicly fume at FBI Director James Comey and many Republicans sense political opportunity, a member of the U.S. House Judiciary Committee tells WND and Radio America the letter was really Comey’s way of avoiding a perjury investigation against him in Congress.

On Friday, Comey sent a letter to several committee and subcommittee chairman and ranking members, informing them that new emails “pertinent to the investigation” had been discovered. Twice in the three-paragraph letter, Comey noted his duty to keep Congress up to speed on the case.

“Although the FBI cannot yet assess whether or not this material may be significant, and I cannot predict how long it will take us to complete this additional work, I believe it is important to update your Committees about our efforts in light of my previous testimony,” Comey stated.

Rep. Louie Gohmert, R-Texas, said this really boils down to Comey keeping his sworn promise to lawmakers given during testimony in the wake of the FBI refusing to recommend charges against Hillary Clinton.

“It is actually the director of the FBI avoiding lying to Congress. He said he would update us,” Gohmert told WND and Radio America. “I think at the time he said it, he probably did not anticipate that there was going to be any other developments sufficient to get him to pursue the case further.”

What do YOU think? Is FBI Director James Comey a hero or villain? Sound off in today’s WND poll

Shortly after the Comey letter was reported, sources within the FBI revealed that the newly discovered emails were found on a device belonging to Clinton aide Huma Abedin and her estranged husband, former Rep. Anthony Weiner, D-N.Y.

Gohmert said that is significant.

“If it’s true what we’re told that Weiner had emails that were for Huma Abedin, if any of those are classified, then Huma broke the law by allowing her husband – even though they’re married – to have access to those emails,” Gohmert explained.

WND VIDEO: Have to go to the WND article to listen to Gohmert.

He said that arrangement also made both Weiner and Abedin ripe for blackmail.

“One of the reasons it’s so important for our high officials to be above reproach is the fact that, because Weiner was doing all this sexting, that kind of thing could have made him vulnerable to blackmail,” Gohmert said.

He said the impending Weiner-Abedin divorce could have put Abedin at the same risk.

“If he has emails that Huma should not have let him see, then she could be a target for blackmail,” Gohmert said. “If Hillary were elected, then Huma would be the closest confidante to the president of the United States but very vulnerable to blackmail.”

Gohmert is also struck by the Clinton team demanding the FBI reveal everything it has since this revelation comes so close to Election Day.

The congressman is disappointed the Clinton investigation did not broaden into a probe of Clinton Foundation activities and how they influenced Clinton’s decisions at the State Department.

“For heaven’s sake, when you’re allowing the sale of our uranium and it ends up going to Russia and our enemies, that’s pretty amazing,” Gohmert said. “None of that seemed to pique the interest. Some of us sure think it sounded like there may have been crimes involved. [It] certainly merited having a grand jury impaneled and at least [having] them look into these things.”

“As long as she’s there, Hillary Clinton will never be prosecuted,” Gohmert said. “The only chance there is that Hillary Clinton may eventually have to answer for some of the things she’s done is if Donald Trump is elected.”

He continued, “We have got to clean out the cesspool. It stinks to high heaven.”

While the Clinton campaign demands to see what emails the FBI has and simultaneously insists they are nothing of consequence, Senate Minority Leader Harry Reid, D-Nev., is taking the Comey criticism to a new level.

In a letter, Reid is accusing Comey of violating the Hatch Act by sending his letter so close to the election. What’s more, Reid accused Comey of sitting on “explosive” evidence of Trump’s ties to the Russian government.

“In my communications with you and other top officials in the national security community, it has become clear that you possess explosive information about close ties and coordination between Donald Trump, his top advisers, and the Russian government – a foreign interest openly hostile to the United States, which Trump praises at every opportunity. The public has a right to know this information,” wrote Reid.

Gohmert minced few words about Reid. First, the congressman contends Comey may have violated the Hatch Act if he didn’t send the letter updating member of Congress on the probe.

“I think it would be a potential violation of the Hatch Act to use his position to prevent Americans from knowing the substantial change, the new evidence that has been found,” he said.

As for Reid himself, Gohmert said the Nevada Democrat’s reputation is already worthless.

“For lying Harry Reid, the guy that said (2012 Republican presidential nominee Mitt) Romney didn’t pay taxes for 10 years, it turned out Reid had no basis. He just totally lied. He still says he is so proud he went and lied about Romney because it helped [President Obama] win the election,” Gohmert said.

“That tells us that Harry Reid is a guy who is so unscrupulous, so immoral that I don’t really much care what allegations he makes.”

While he does encourage a quick report on these new findings, Gohmert is pleading with the FBI to do a thorough job examining the new emails and not feel that it has to make a conclusion to meet a political deadline.

“The FBI needs to get their reputation back, and the only way to do that is to handle this more professionally,” he said.