FBI Director James Comey says Hillary was careless but did not rise to the level of criminality … Say what?

The FBI Director said [the FBI would] have to prove Criminal Intent along with the Misdemeanor Statute so the Intent would be when Hilary Installed the Unauthorized Private Server to divert Information that she would “CLEARLY KNOW” some would be Classified Information due to the Signing of the Oath of Office.   And Congressman Cummings made a Comparison of General Petraeus first Lying to the FBI then later admitting to the charge regarding divulging Classified Information, and we have the Testimony to Congressman Jordan under oath by Hilary saying she did not send or receive Classified Information on her Private server, but then said to the FBI she did [use her private server]. And the FBI Director did not Ask Congress for this Information from Congress to review the Hearing. Hold the Line Congressman and Good Job standing up for We the People –  a Nation of Laws, we cannot allow a Clinton Monarchy to Form within the USA!!!!!     http://www.breitbart.com/big-government/2016/07/07/perjury-hillary-clinton-chaffetz-comey/

Chaffetz: We Will Refer Hillary Clinton to the FBI for Perjury 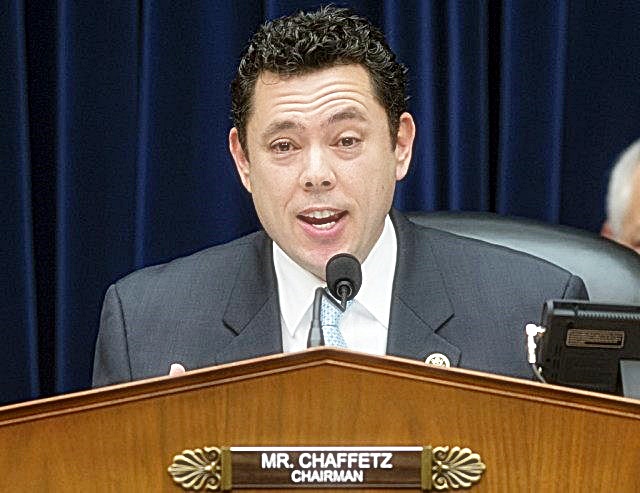 By JOEL B. POLLAK

Rep. Jason Chaffetz (R-UT), chair of the House Committee on Government Oversight and Reform, told FBI director James Comey during his testimony on Thursday morning that the committee would refer former Secretary of State Hillary Clinton for investigation for perjury, given that she lied under oath before the House Select Committee on Benghazi in October.

“You’ll have one,” Chaffetz said, within “a few hours,” after Comey testified that the FBI would need a referral for Congress before investigating.

As Breitbart News detailed earlier this week, Clinton lied under oath to Congress in at least three ways: first, by stating that she had turned over “all my work related emails” from her private email server to the government; second, by insisting there was “nothing marked classified on my e-mails”; and third, by telling the committee that her attorneys “went through every single e-mail.” FBI director James Comey’s statement Tuesday suggested that none of those sworn statements were true.

Chaffetz asked Comey whether he had reviewed Clinton’s testimony before the Benghazi committee as part of his inquiry. He said that he had not, but that he was aware of it. Chaffetz also asked Comey whether Clinton had lied to the FBI, and he said he did not have reason to believe she had done so.

In addition to misleading Congress in October, Clinton may have committed perjury when she signed a sworn declaration in 2015 stating that she had turned over all work-related emails: “While I do not know what information may be ‘responsive’ for purposes of this law suit, I have directed that all my e-mails on clintonemail.com in my custody that were or potentially were federal records be provided to the Department of State, and on information and belief, this has been done”

Earlier, there were suspicions that Clinton might have committed perjury if and when she had signed the standard exit form, OF-109, which all State Department employees must sign, indicating they have turned over all materials, classified and otherwise, to the government. Later, the State Department admitted that it had no record of her signed OF-109 form.

Joel B. Pollak is Senior Editor-at-Large at Breitbart News. His new book, See No Evil: 19 Hard Truths the Left Can’t Handle, will be published by Regnery on July 25 and is available for pre-order through Amazon. Follow him on Twitter at @joelpollak.