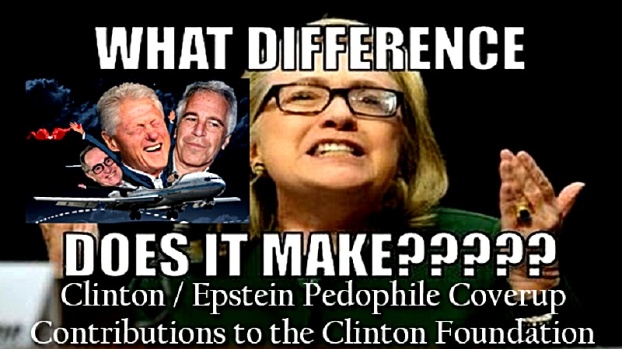 The Pizzagate scandal is largely dismissed because the alleged code words thought to be pedophilia-speak is educated speculative guessing. Unless an actual pedophilia ring was uncovered, law enforcement won’t point fingers at power Dem elites. Especially when Clinton accusers and/or allies with incriminating knowledge mysteriously die or disappear (Conspiracy websites willing to speculate on the obvious: HERE & HERE) .

The thing is wealthy elites have been getting away with pedophilia probably for decades. And thanks to the Wikileaks hack (whether they did it or a hacker(s) gave up info), a spotlight has been shined on the Left in relation to the Clinton Crime Syndicate (CCS).

Now even Left Wing NBC News is reporting on a potential CCS connection to pedophilia rings. Below is the story.

While I am skeptical of where this will lead, it is noteworthy to see that this report comes from NBC and more specifically Chuck Todd.  In a report earlier this week, NBC reported that there were allegations that while Hillary Clinton was Secretary of State, the quashed investigations into a prostitution and pedophile ring that was operating inside the department in order to avoid scandal and protect high-ranking employees and an ambassador.

“Serious allegations concerning the State Department,” the NBC anchor said.  “According to internal State Department memos the agency might have called off or intervened into investigations into possibly illegal, inappropriate behavior within its ranks allegedly to protect jobs and avoid scandals.

“This concerns a time when Hillary Clinton was secretary of state.”

VIDEO: Guess What Investigation Hillary Clinton Covered Up At The State Department

Flashback to June 11th, 2013 when NBC was reporting real news… Hillary Clinton was never a progressive liberal, she was never a feminist, she never cared about anyone but herself.

“There is an old saying in Washington that the cover-up is worse than the crime. But in this case both parts of it are disturbing,” Chuck Todd continued.

“Allegations of prostitution and pedophilia, and allegations that those crimes were somehow covered up or not looked into,” he continued.  “So the State Department this morning is having to respond to those claims, and those investigations involve misconduct by State Department officials, including an Ambassador and security agents attached to then-Secretary of State, Hillary Clinton.

“The allegations are that these investigations were whitewashed, quashed altogether, and that those orders came from high up,” he added.

The report then went on to state:

NBC has obtained documents relating to ongoing investigations into some disturbing allegations involving State Department personnel and at least one ambassador. A State Department memo says, quote, “the Ambassador routinely ditched his protective security detail in order to solicit sexual favors from both prostitutes and minor children.”

We know that since President Donald Trump has been in office that his administration has overseen quite a few busts concerning pedophiles, far more than the Obama administration.

We also know that Bill Clinton and others in the US government, such as Bob Menendez have close ties to or have actually engaged underage girls in sex.  In the case of Clinton there a long trail of women claiming he sexually assaulted them, as well as his ties to Jeffery Epstein, a billionaire financier formerly with Bear Stearns, was sentenced to just 13 months jail time when he was convicted of soliciting a minor for prostitution.  As Daisy Luther reported:

This would inevitably lead to tying Epstein to the State Department and child trafficking.  And let’s not forget that Hillary’s bestie, Huma Abedin, has a husband taht  has just stepped in it again with an underage girl.

Now, the question is, will President Trump not only ask his Attorney General to appoint an investigation into the Clintons, but into the Clinton State Department concerning the allegations, considering the given evidence we have of the Clintons’ ties to known pedophiles and their sordid criminal and sexual history?

Tim Brown is an author and Editor at FreedomOutpost.com, SonsOfLibertyMedia.com, GunsInTheNews.com and TheWashingtonStandard.com. He is husband to his “more precious than rubies” wife, father of 10 “mighty arrows”, jack of all trades, Christian and lover of liberty. He resides in the U.S. occupied Great State of South Carolina. Tim is also an affiliate for the Joshua Mark 5 AR/AK hybrid semi-automatic rifle. Follow Tim on Twitter.