I wish I count ML McCarren as a friend. But the truth is I’ve never met him or even know what he looks like. I gotta tell ya though, this guy finds some very informative stuff that I dare say the Mainstream Media will not share.

While looking around some G+ Communities I belong to, I came across a McCarren post on MAGA Conservative. Here McCarren has some info from The Epoch Times on a Deep State issue of Spygate.

The post at TET is huge but remarkably easy to comprehend.  Just as a tantalizer, here is a mural size photo from TET which is described as “Infographic”: 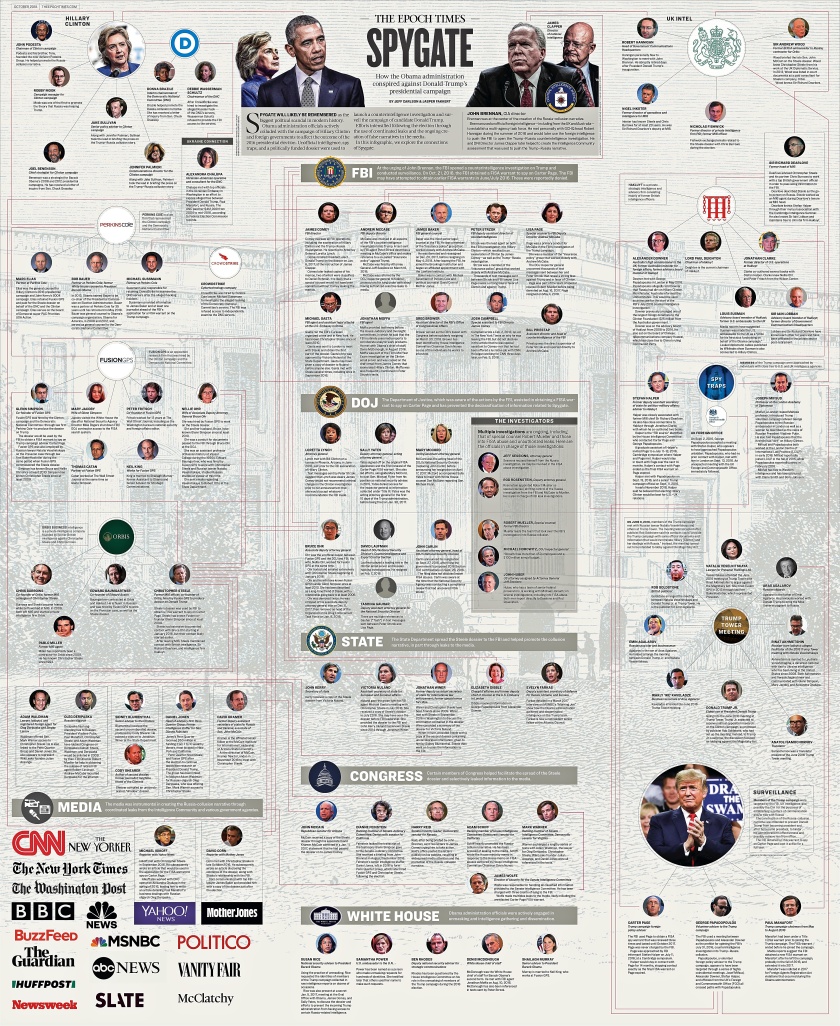 When you click to enlarge the photo, you can observe a mosaic of documented culprits trying to warp the U.S. Constitution by essentially ignoring it and pull out all and any stops to prevent a Trump Presidency OR remove Donald Trump from Office.

Below is McCarren’s summary which draws directly from The Epoch Times.

In this current state of media censorship & defunding, consider chipping in a few bucks for enjoying (or even despising yet read) this Blog.

(Getty Images/Illustration by The Epoch Times)

IT’S TIME THE AMERICAN PEOPLE KNOWN THE UNVARNISHED TRUTH ABOUT THE ALLEGED TRUMP-RUSSIAN COLLUSION. THIS ARTICLE LAYS OUT THE FACTS WITH IMPECCABLE SOURCES AND DOCUMENTATION.

THE MAINSTREAM MEDIA FACILITATED CIRCUS IN WASHINGTON HAS GONE ON LONG ENOUGH.

THE FATE OF OUR NATION HANGS IN THE BALANCE.

👉Although the details remain complex, the structure underlying Spygate — the creation of the false narrative that candidate Donald Trump colluded with Russia, and the spying on his presidential campaign — remains surprisingly simple:

1️⃣. CIA Director John Brennan, with some assistance from Director of National Intelligence James Clapper, gathered foreign intelligence and fed it throughout our domestic Intelligence Community.

2️⃣. The FBI became the handler of Brennan’s intelligence and engaged in the more practical elements of surveillance.

3️⃣. The Department of Justice facilitated investigations by the FBI and legal maneuverings, while providing a crucial shield of nondisclosure.

4️⃣. The Department of State became a mechanism of information dissemination and leaks.

6️⃣. Obama administration officials were complicit, and engaged in unmasking and intelligence gathering and dissemination.

7️⃣. The media was the most corrosive element in many respects. None of these events could have transpired without their willing participation.

Let’s start with a simple premise: The candidacy of Trump presented both an opportunity and a threat.

Initially not viewed with any real seriousness, Trump’s campaign was seen as an opportunistic wedge in the election process. 💡At the same time, and particularly as the viability of his candidacy increased, Trump was seen as an existential threat to the established political system.

👉The sudden legitimacy of Trump’s candidacy was not welcomed by the U.S. political establishment. Here was a ✔️true political outsider who ✔️held no traditional allegiances. He was ✔️brash and boastful, he ✔️ignored political correctness, he ✔️couldn’t be bought, and he ✔️didn’t care what others thought of him—he trusted himself.

SO BEGINS THE ARTICLE.

The prospect that our Federal Government has become a self serving entity is not a pleasant thing to admit. We Americans are a proud people whose myraid accomplishments have benefited all of mankind. But if we are honest, we must acknowledge corruption as well. Just as in all aspects of society, good exists with the bad and our politicians (from both sides of the aisle) may be most susceptible of all.

The stakes are high.

This article details what may well be the greatest threat America has ever faced. It is a must read for everyone wishing to know the truth.

Let’s not forget this attack on the presidency has been orchestrated to circumvent the Constitution of United States and the will of the citizenry… [Blog Editor: Bold text mine]

(CONTINUED FROM ARTICLE)
🔽
💡Clinton Campaign and the DNC

The Clinton campaign and the Democratic National Committee both occupied a unique position. They had the most to gain but they also had the most to lose. 👉And they stood willing and ready to do whatever was necessary to win. Hillary Clinton’s campaign manager, Robby Mook, is credited with being the first to raise the specter of candidate Donald Trump’s alleged collusion with Russia.

💥The entire Clinton campaign willfully promoted the narrative of Russia–Trump collusion despite the uncomfortable fact that they were the ones who had engaged the services of Fusion GPS and Christopher Steele through their law firm Perkins Coie. Information flowed from the campaign—sometimes through Perkins Coie, other times through affiliates—ultimately making its way into the media and sometimes to the FBI. Information from the Clinton campaign may also have ended up in the Steele dossier.

Jennifer Palmieri, the communications director for the Clinton campaign, in tandem with Jake Sullivan, the senior policy adviser to the campaign, took the lead…
https://www.washingtonpost.com/posteverything/wp/2017/03/24/the-clinton-campaign-warned-you-about-russia-but-nobody-listened-to-us/?utm_term=.be79b30c359e

…in briefing the press on the Trump–Russia collusion story.

👉(The) statements, which were later proven to be incorrect, are all the more disturbing with the hindsight knowledge that it was a senior Clinton/DNC lawyer who helped plant the story. And given the prepared statement by Sullivan, the Clinton campaign knew this.

💥This type of behavior would be engaged in repeatedly—damning leaks leading to media stories, followed by ready attacks from the Clinton campaign.

🔼(FROM ARTICLE, EMPHASIS MINE)