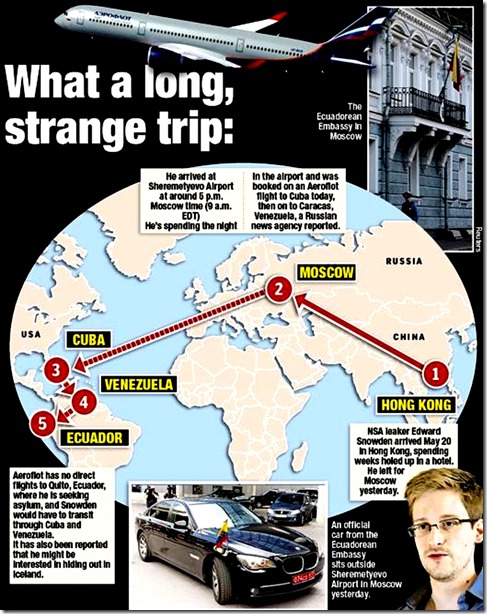 I wrote a blog post on June 10th entitled “I Consider Snowden a Hero-Whistleblower – For Now”. The “For Now” part has elapsed. During his stay in Hong Kong Edward Snowden provided some of those secret NSA documents over to the South China Morning Post (SCMP). The SCMP is a Hong Kong newspaper. Hong Kong is a former British Colony forced to be returned to Communist China when the lease agreement was up. Hong Kong operates autonomously BUT is still under the Red Chinese government. Hello Mr. Snowden! Communist China is not exactly on friendly terms with the USA. In fact our American government has been complaining about Chinese hackers committing cyber war against the USA. So what does Snowden do?

Snowden tells Chinese press the USA has been hacking China for years. Essentially Snowden placed his Country in an awkward position publicly. Personally I doubt Red China is so gullible and stupid not to know that we would allow a challenger to our National Interests and National Security to have an anti-American agenda go unchecked. So when Snowden reveals to the international public that which China already knows, then Snowden is providing our unspoken enemy China a diplomatic international coup against the USA. That moves Snowden from Hero-Whistleblower thinking of his fellow Americans privacy to Treasonous-Dog revealing classified info to foreign nations.

The media has managed to follow Snowden from Hong Kong to Moscow (link last updated at this post as 1:41 PM ET). Most of the media believed Snowden was going to board a Russian passenger Aeroflot jet bound for Venezuela then Ecuador. Nobody knows what has happened except Snowden did not board the Aeroflot jet. Personally I believe Mother Russia is talking to Edward Snowden to get some NSA Intel just as China has managed to do:

Experts said it was likely that the Russians were questioning Snowden, interested in what he knew about U.S. electronic espionage against Moscow.

DEFINETLY Edward Snowden has evolved from a NSA Hero-Whistleblower exposing that our government has been spying on all Americans to a cowardly traitor that has become a double agent style spy for China and Russia. As an American traitor á la Benedict Arnold and Bradley Manning, Snowden needs to be captured and prosecuted. If a guilty verdict is given his punishment should be according to the damage he has accomplish giving classified information to China and Russia. I don’t know what that information is but if it was critical as in Julius and Ethel Rosenberg giving nuke secrets to the old USSR so that the USA would not have a monopoly on Atomic Weapons. The act was treasonous and the Rosenbergs were convicted of a Capital Crime on April 5, 2013 and were fried in the electric chair on 1953.