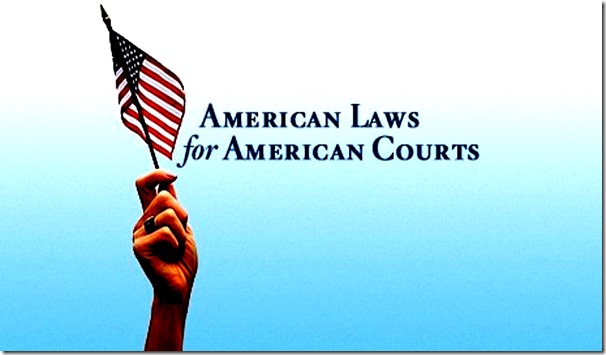 Federal Court Judge suspended Oklahoma’s SQ755 which was approved overwhelmingly to prevent Sharia Law from being recognized as any kind of law of the land in the State. U.S. District Court Judge Vicki Miles-LaGrange officially ruled SQ755 unconstitutional (This source link is a tongue-in-cheek article about separation of Mosque and State) on August 15, 2013.

Because organization like the Council on American-Islamic Relations (CAIR) have pretended (You can read about CAIR skullduggery at the watchdog website Anti-CAIR) to be a moderate Muslim organization and vehemently have protested that Islam’s First Amendment Rights of Religious Liberty was being singled out by a government legislature. Indeed an understanding as presented by a CAIR-like organization would be correct since the First Amendment specifies that Congress shall make no law establishing or curbing the actions of a religion.

Congress shall make no law respecting an establishment of religion, or prohibiting the free exercise thereof; or abridging the freedom of speech, or of the press; or the right of the people peaceably to assemble, and to petition the government for a redress of grievances. (Bold Emphasis Mine – 1st Amendment)

Unfortunately for CAIR-like organizations the Oklahoma Congress thought ahead of the Judge’s ruling and joined a growing number States using the template of American Laws for American Courts (ALAC). ALAC goes around the religious standard that Radical Muslim groups in the USA have been decrying by focusing on one principle; i.e. the State Congresses or legislatures have centered their law that foreign laws may not be used as a precedent in American Courts. Guess what Sharia Law is? Sharia and the U.S. Constitution are not compatible in execution hence the foreign nature of Sharia as used in Muslim nations CANNOT be used as a legal precedent in State Courts. And keep in mind some State Courts have ruled according to the stipulations of Islamic Sharia when it comes to civil matters and marriage. That will not happen in Oklahoma where I reside.

Oklahoma has passed their version of an ALAC that a huge majority in both Houses of the State legislature approved of and then promptly signed by Oklahoma Governor Mary Fallin.

The bill signed into law by Governor Fallin passed the House of Representatives by an 85-7 margin and in the Senate by a 40-3 margin. (American Law for American Courts Enacted in Oklahoma Moves Ahead in Florida; By Jerry Gordon; WatchDogWire.com; 4/20/13 – Read the Whole Article)

From an article by Rebekah Maxwell (link above) Sharia is messed up when compared to American Law:

In her book, Cruel and Unusual Punishment, former Muslim Nonie Darwish outlines the incongruities of Sharia law and American law, including:

1.     Death penalties for anyone leaving Islam

5.    Institutionalized inequality; Muslims are respected over non-Muslims, as are men over women, the wealthy over the working class.

9.    Harsh penalties, like flogging, dismemberment, and beheading, for speaking against Islam and specifically Mohammed.

And just for the ladies,

3.    High burdens of proof for divorce (while husbands merely have to speak a phrase)

5.    No protection against domestic violence

6.    Losing custody of your children if you remarry

7.    Strict clothing/modesty laws…you can be imprisoned for forgoing a veil or showing your ankles

According to the email from American Public Policy Alliance Governor Fallin signed the bill into law on April 22, 2013. So take that Muslim Brotherhood loving and Radical Muslim CAIR and U.S. District Judge Vicki Miles-LaGrange. OK-LA-H-O-M-A is not bowing to foreign laws including Sharia if they contradict the State and Federal Constitution.

SQ755 had overwhelmingly passed a vote of the people in Oklahoma in November 2010.

This decision was not a surprise and echoed an earlier ruling by the Tenth US Circuit Court of Appeals back in 2010. As detailed in this article, SQ755 contained several flaws which rendered it counterproductive:

Fortunately, there is an effective and constitutional alternative to measures such as SQ755 and Oklahoma joined a host of other states this spring in passing it into law. That law is called American Laws for American Courts (ALAC).

Versions of ALAC have now been signed into law in Tennessee, Louisiana, Arizona, Kansas, and Oklahoma. A version of ALAC passed the Alabama legislature overwhelmingly as a constitutional amendment and goes to a vote of the people on the ballot in the next statewide election. A version of ALAC also passed both houses of the Missouri legislature but was vetoed by the governor; an override session is scheduled for September. Most recently, a version of ALAC passed the North Carolina Senate and House by a wide, bi-partisan margin and is awaiting the governor’s signature there.

ALAC remedies the flaws in Oklahoma’s SQ 755, and in many ways takes a diametrically opposite approach to SQ 755:

• ALAC is facially neutral.  In an honest debate, it cannot be accused of discriminating against any religion or protected class.

• ALAC is based on a completely different legal premise from SQ 755’s. Rather than seeking a ban on foreign or international law, ALAC seeks to preserve the constitutional rights and state public policy protections of American citizens and legal residents, in cases involving foreign laws in the particular dispute being adjudicated.  If a case arises in which a foreign law or foreign legal doctrine is involved in a dispute in a state court, ALAC prevents the use of that foreign law or foreign legal doctrine if any of the parties’ fundamental constitutional rights or state public policy would be violated in the process.  This is very different from a blanket ban on foreign laws.

Because of the careful planning and thought behind ALAC’s wording, in contrast to SQ 755, from a practical standpoint, it is effective in preventing the enforcement of any foreign law — including in many cases, shariah law — that would violate U.S. and state constitutional liberties or state public policy.

And the need for an effective law preserving constitutional rights against the enforcement of unconstitutional foreign law is both real and urgent: an independent study conducted by the Center for Security Policy found fifty cases in 23 states where shariah law had been introduced into state court cases, including many appellate and trial court cases where the judges ruled for shariah law over U.S. law.  Most victims of foreign laws in these cases had come to America for freedom and individual liberty – including American Muslims seeking to escape shariah laws.

The American Public Policy Alliance (APPA), a non-partisan advocacy organization dedicated to government transparency, government accountability and the constitutionality of U.S. and state laws and policies, is working with legislators nationwide on policies and initiatives. Along with allied organizations, APPA is working to defend free speech, preserve and promote human rights, maintain the strength of our U.S. and state constitutions, and aid and promote public safety.

One of the greatest threats to American values and liberties today comes from foreign laws and foreign legal doctrines which have been influencing our legal system at the municipal, state and federal levels. This phenomenon is known as “transnationalism” and includes the increasingly frequent appearance of Islamic Shariah law. APPA focuses largely on combating this process across a broad variety of issues.