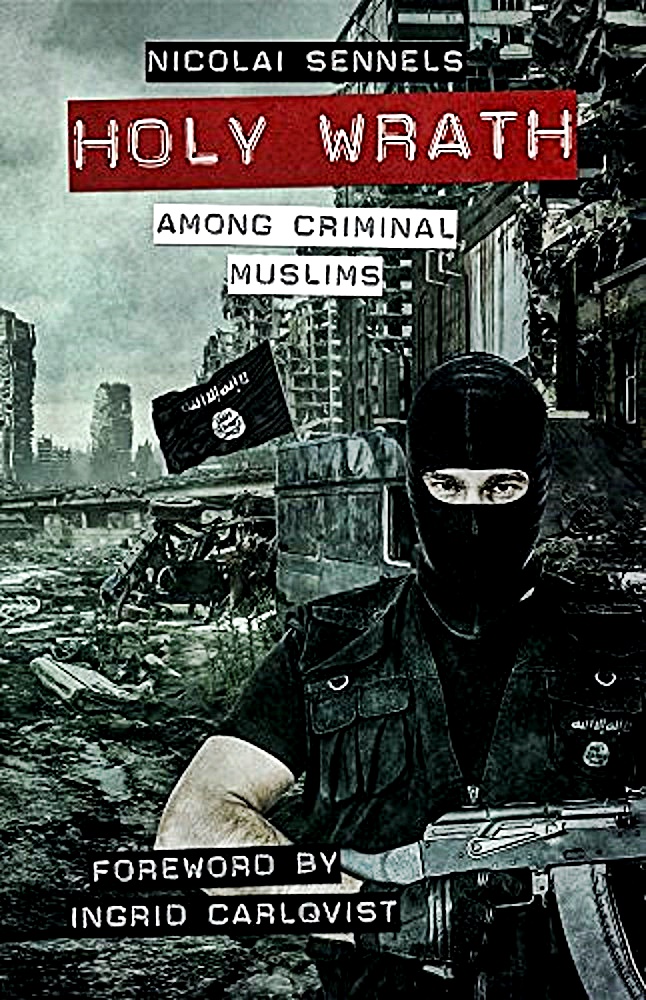 Fjordman gives a book review to a Danish book written 2008 but now available in English about Radical Islam and forced conversions to Islam in European prisons.

The book Holy Wrath: Among Criminal Muslims was written by the Danish psychologist Nicolai Sennels. This is an English translation of a book called Blandt kriminelle muslimer, which was written in 2008. It is based on personal experiences Sennels had with young Muslim criminals while working as a psychologist for three years at a juvenile facility in Copenhagen.

Since 2008, problems with criminal gangs from an immigrant background have grown worse in Western Europe. The terror threat from militant Muslims and Jihadist groups has increased as well.

On 14-15 February 2015, two victims plus the perpetrator were killed and several others wounded during terror attacks in Copenhagen. The first attack targeted a debate about blasphemy attended by the Swedish artist Lars Vilks, who has drawn Muhammad as a dog. The second attack targeted Jews in a synagogue.

The terrorist was Omar El-Hussein. He was born in Copenhagen to Palestinian parents who fled to Denmark via a refugee camp in Jordan. He had recently been released from prison for a stabbing offense. Omar became radicalized as a militant Muslim in prison. During his deadly attacks, he was carrying a copy of the Koran with a bookmark at Surah 21. This chapter contains verses about punishing disbelievers of Islam.[1]

In cities across Europe, natives are being harassed, robbed, raped, stabbed and even killed by Muslim immigrants. This violence is usually labelled as “crime,” but it could sometimes also be labelled as Jihad. The line that separates crime from Jihad is blurred at best. Sometimes, there is no dividing line between the two at all.

Those familiar with early Islamic history know that looting and stealing the property of non-Muslims has been part and parcel of Islam from the very beginning. In fact, so much of the behavior of Muhammad and the early Muslims could be deemed criminal that it is difficult to know exactly where crime ends and Jihad begins.

Muslims are over-represented in jails all over the Western world. Some violent criminals also convert to Islam while behind bars. As a devout Muslim, you can continue doing criminal things, yet at the same time claim to be morally superior to your victims. If you rob and mug non-Muslims you are not a thief or a thug. You are in fact a brave Jihadist doing Allah’s noble work in spreading the supremacy of Muslims over others.

Some militant Muslims continue their Jihad inside Western jails. In Britain, a prison chaplain revealed in February 2018 that inmates are being forced to convert to Islam for protection behind bars. Paul Song said he had been hit by Muslim inmates at HMP Brixton. He believes that the “Christian faith is not equal” in prison: “Some people have been forced to convert with violence. How do I know? Because three or four people come up to me to tell me. This is a very sensitive issue.” One prisoner has come forward and made a signed statement that prisoners in the UK were forced to convert to Islam after serving time in 2015. Mr. Song says he was removed from his job in south London amid accusations that his Christian teachings were “too radical.”[2]

It is not known exactly how many Muslims there are in French prisons because the French state does not publish such statistics. However, virtually everyone seems to agree that Muslims make up a majority of convicted criminals in France, even though they constitute a minority of the overall population.

Already in 2008, 60 to 70 percent of all inmates in France’s prison system were Muslims.[3] In 2015, it was estimated that of the people behind bars in France, at least 70 per cent were Muslims. The percentage could be even higher than this in cities such as Marseilles, or in some of the most notorious suburbs of Paris.[4]

French prison guards launched public protests against the government in January 2018. French prisons have developed a reputation for being hotbeds of radical Islam that have turned out some of the Jihadists behind a series of bloody terrorist attacks in recent years. The protests began after a convicted Al-Qaeda militant attacked guards in a high-security facility on January 11 with a razor blade and scissors, injuring three of them. A series of other assaults occurred shortly afterwards, often by radicalized Muslim inmates. “These people go to work every day, civil servants, fearing for their security or their lives. We need solutions which respond to this concern for working in safety,” Laurent Berger, head of the national CFDT union, said.[5]

In Copenhagen, it was a shock for Nicolai Sennels when he realized that most of the inmates in a Danish prison were young Muslim men. This is a common pattern today from Scandinavia to Spain. Moreover, the Muslims routinely blamed their victims for their problems. They have been raised within a culture where respect equals instilling fear in others. This is how aggressive emotions are perceived in Muslim culture: It is other people’s fault if you feel emotionally distraught. If what happens is always someone else’s fault, then you are without responsibility for your own situation. You are a victim who has been belittled, oppressed or persecuted. This perceived victimhood leads to a sense of entitlement to retribution and revenge.

Regardless of whether the Muslim youths are religious or not, they think and react in similar ways when it comes to the cultural view of honor and shame, revenge and limitless loyalty to the group. Even Muslims who sold drugs, drank alcohol and did not fast during Ramadan were greatly offended by the Danish Muhammad cartoons. They harbored a deeply-rooted perception that Islam and Muhammad should always be defended.

Sennels notes that among Muslim inmates, being religious gives one a higher status. Those who read the Koran and prayed every day had a certain amount of power over the minds of other Muslim men. Moreover, those who held religious Islamic views also tended to be more ideologically hostile to Western society.

Muslim criminals generally felt that external factors were the causes of their problems, not their own actions. They always viewed themselves as victims of outside forces: Provocations by the police, racism from Europeans, harassment from Christians, Jews or others. This became the moral justification for aggression. Since their honor had been violated, they had the right, perhaps even the duty, to respond with anger and force.

Sennels comments that for Muslims, anger and violence generate respect. A lack of anger and violence is viewed as weakness and generates contempt. In the Middle East, if you are perceived as weak, you will be preyed upon by rival clans. Western liberals do not understand this mentality. The more “dialogue” and kindness they show to Muslims, the more Muslims will despise them for being weak. They respect only force.

In Western and East Asian culture, to display anger publicly is often viewed negatively as a loss of self-control:

“Muslim culture, on the other hand, has the complete opposite view. Here, lack of inclination or ability to deliver the expected aggressive reaction when provoked is the fastest way to lose face. If you believe that it is always other people’s fault when you feel hurt or frustrated, you have a tendency to see yourself as a victim: ‘It’s the other guy’s fault!’ This will generate a feeling of being insulted and offended, and the resulting reaction is often to lash out with accusations like ‘you make me feel this way, so of course I’m reacting.’ By this logic, even very destructive reactions can be justified. The victimhood becomes a blank check that can be used as an excuse for all kinds of ‘legitimate’ responses and revenge. In plain English: If you are in a nightclub, and you accidentally bump into a person who has grown up with this kind of thinking, odds are you are in for a beating. Like a young man said in group therapy, trying to explain why he stabbed another young man outside a convenience store several times: ‘It was his own fault. He shouldn’t have made me mad.’”[6]

The book by Nicolai Sennels was written about the experiences of a psychologist in one Scandinavian prison. However, some of the insights he presents about Muslim culture have wider significance. It is a big problem for Muslims if they cannot properly address shortcomings in themselves and their own societies because they blame others for their failures and misfortunes. Unfortunately, it is also a big problem for the world if Muslims continue lashing out with violence against other people because of imaginary or grossly inflated wrongdoings.

For a complete archive of Fjordman’s writings, see the multi-index listing in the Fjordman Files.