There is a long line of Conservative individuals and organizations – especially the independent Tea Party organizations – that have been persecuted and/or targeted for being anti-Obama. Dinesh D’Souza has enter the long list for making the documentary 2016: Obama’s America which actually grossed $33 MILLION bucks at the box office.

I first became aware of this Leftist persecution of a Conservative dissenter of Obama through a Facebook friend. I will post his alert along with the movie documentary 2016: Obama’s America after this news report I found at Freedom Outpost which delves into the specifics I just merely introduced. 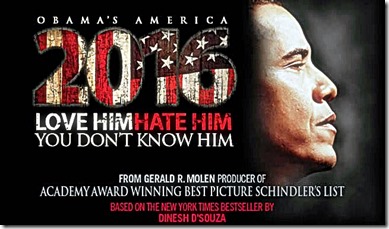 “2016: Obama’s America” was one of the most talked about movies of the summer in 2012. Directed by Dinesh D’Souza, an outspoken critic of President Obama, it explored the fundamental idea, “If Barack Obama wins a second term, where will we be in 2016?” Dinesh D’Souza probably never imagined that he would be indicted by a grand jury for giving “too much money” to a U.S. Senate candidate in 2012. In what amounts to nothing but trumped up charges, it stands to reason that this is direct targeting by the Obama Administration. Conservatives from all across the country, in any arena, need to heed the warning that Obama is after them. No one is safe.

Dinesh D’Souza is a well known author as well, having written the books Illiberal Education, What’s So Great About America, The End of Racism, and The Roots of Obama’s Rage, which “2016: Obama’s America” was based on, and many others. So it is no coincidence that the Obama Administration, using every available weapon at their disposal, would single out D’Souza. He had a bulls-eye on his back. All conservative Americans do. If the DOJ can indict Dinesh D’Souza for campaign finance “violations,” no one is safe.

Conservative filmmaker Dinesh D’Souza, whose documentary 2016: Obama’s America took a critical look at President Barack Obama and was a surprise hit in 2012, will be arrested in New York on Friday for allegedly violating campaign-finance laws, The Hollywood Reporter has learned.

Federal authorities accuse D’Souza of donating more than is legal to the campaign of Wendy Long, who ran in 2012 for the U.S. Senate seat vacated by Hillary Clinton but lost to now-Sen. Kirsten Gillibrand. Long, though, is not mentioned in an indictment obtained by THR on Thursday.

Insiders say D’Souza has been friends with Long since they attended Dartmouth College together in the early 1980s. According to the indictment, D’Souza donated $20,000 to Long’s campaign by aggregating the money from various people and falsely reporting the source of the funds. But Gerald Molen, a co-producer of 2016, says the charge is politically motivated.

“In America, we have a long tradition of not doing what is commonly done in too many other countries — criminalizing dissent through the selective enforcement of the law,” Molen tells THR.

D’Souza is accused of donating $20,000 to candidate Wendy Long, who was challenging Democratic Senator Kirsten Gillibrand. Gillibrand beat Long by 44 percentage points. Long never stood a chance against Gillibrand, and her name was never mentioned in the indictment against D’Souza. The Daily Caller reports “that indictment claims that D’Souza, 52, deceptively used straw donors to donate the funds, and misreported the source of the campaign cash.”

Long only raised $785,000 total for her campaign against Gillibrand. To accuse D’Souza of deceptively using straw donors to donate funds and misreport campaign cash for a candidate that lost by almost 50 percentage points is ludicrous. This is political targeting. Obama’s DOJ had their eyes on D’Souza and decided to take him out. This was a choreographed hit.

In 2012, federal law “limited primary and general election campaign contributions to $2,500 each, for a total of $5,000, from any individual to any one candidate.”

Preet Bharara, an Obama appointee who is the U.S. Attorney for Manhattan, said, “As we have long said, this Office and the FBI take a zero tolerance approach to corruption of the electoral process.”

The Obama Administration says they have a “zero tolerance” approach to corruption of the electoral process is akin to Islamists saying they have a “zero tolerance” for the killing of Jews. Nothing could be further from the truth. In 2008, Obama’s Department of Justice was accused of voter intimidation, when members of the New Black Panther Party were seen threatening voters in Philadelphia. Non-Citizens were caught voting in Ohio in the 2012 Presidential election. In February 2012, 1.8 million dead people were STILL registered to vote.

No, this is sweet justice for the Obama Administration, to categorically take down an outspoken rival. These charges are baseless in the face of obscene corruption by Obama and his fascist minions.

D’Souza first learned he was being investigated in the middle of 2013, several months after 2016 had earned $33 million at the box office and become the second-most-popular political documentary in U.S. history. The film included an interview with Obama’s half-brother, George Obama, who was mildly critical of the president.

Molen says D’Souza is being singled out for “an alleged minor violation” in the same way the IRS reportedly targeted conservative Tea Party groups for retribution. “In light of the recent events and the way the IRS has been used to stifle dissent, this arrest should send shivers down the spines of all freedom-loving Americans,” Molen says.

The timing is everything. D’Souza’s film earned $33 million dollars at the box office, and Obama was the subject of the movie. President Obama is using his office to take out his opponents; those who would dare speak out against him. Free speech is but a myth for conservatives in Obama’s America.

This is Obama’s America that Dinesh D’Souza warned the public about, but the sheeple chose not to heed the warnings. A tyrant and vicious dictator is using his power to wage war against his enemies, and when he is through with America, the landscape might not ever be the same.

I am a Christian and a staunch conservative. I am very interested in civil liberties and also arts and entertainment from a conservative point of view. I am interested in a wide variety of topics that have to do with the liberal war against conservatives. Christians are being attacked on all fronts, be it the homosexual agenda, abortion issues, and other forms of persecution. It is time to stand for Christ in a sin sick world. Janna Brock also contributes to The BrennerBrief.com.

View all posts by Janna Brock

Less than a year after the IRS admitted to singling out Tea Party and other like-minded groups, federal agencies and prosecutors once again are facing accusations of going tougher on conservatives than their liberal counterparts.

In a case that riled conservative filmmakers and producers, federal prosecutors last week announced campaign finance charges against Dinesh D’Souza, the documentarian behind an anti-President Obama film released during the 2012 presidential campaign.

D’Souza pleaded not guilty on Friday, though his attorney did not outright deny that a violation of some kind may have occurred.

But colleagues rallied to D’Souza’s defense, calling the decision to prosecute the case politically motivated.

“When you make a film that hits the president between the eyes and could shift an election, you become a target,” conservative filmmaker Dennis Michael Lynch told Fox News, referring to D’Souza’s “2016: Obama’s America.”

Producer Gerald Molen, in a statement to FoxNews.com, called it a “selective prosecution.”

Texas Republican Sen. Ted Cruz, on Sunday, also described it as part of a pattern during his interview on CBS’ “Face the Nation.”  Though the comments were not aired on CBS, Cruz posted the full clip online.

VIDEO: Sen. Ted Cruz: The Abuse of Power from this Administration Concerns Me

“Can you image the reaction if the Bush administration had … gone and prosecuted Michael Moore and Alec Baldwin and Sean Penn?” Cruz said. “It should trouble everyone the government uses government power and the IRS in particular to target their enemies.”

D’Souza was charged with felony campaign finance violations, relating to allegations that he directed people to donate a total of $20,000 to New York Republican Senate candidate Wendy Long, and then reimbursed them.

His lawyer claimed there was no “quid pro quo” at play, “nor was there even any knowledge by the candidate that campaign finance rules may have been violated.”

Federal officials, though, described the alleged violations as serious.

U.S. Attorney Preet Bharara said in a statement that the office and FBI take a “zero tolerance approach to corruption of the electoral process.”

“If, as alleged, the defendant directed others to make contributions to a Senate campaign and reimbursed them, that is a serious violation of federal campaign finance laws,” he said in a statement.

Obama’s America 2016 by -Dinesh D’Souza. Watch this film and you’ll understand why Obama has targeted this film maker…

We Welcome all Who See the DANGER of the ISLAMIC BEAST!

We do not believe in Muhammad he was demoniacally possessed and evil.

Please try to be courteous to your fellow members. Anti-Jewish Christian Hindu Buddhist Confucius Sikhism, Jainism, Zoroastrianism, Taoism, Mormon remarks or post will get the member warned once and banned if the behavior continues. We are all brothers and sister against the evil of Islam treat each other like family.