Act for America emailed an excerpt of an article from The Federalist with the email subject line “The Muslim Brotherhood is Rattled”. The Federalist article by Ben Weingarten highlights that John Bolton’s appointment as National Security Advisor has rattled the transnational Islamic terrorist organization the Muslim Brotherhood (aka Ikhwan to many Arab speaking people) because Bolton has had the correct assessment that the terrorist network indeed should be on the State Department’s designated a Foreign Terrorist Organization (FTO).

Here is the Act for America email intro:

The left has made it their mission to smear anyone who opposes violent jihad, and cast them as “Islamophobic.” Recently, former ambassador John Bolton has been the target of such attacks because of his appointment as National Security Advisor (NSA) to the President. This is not only an attempt to discredit John Bolton, it is an attempt to protect the Muslim Brotherhood from finally being designated a terrorist organization.

As patriotic American’s we must stand up and not only support the appointment of Ambassador John Bolton, but also tell Congress it is time, once and for all, to designate the Muslim Brotherhood as a terrorist organization. Click here to tell your local Members of Congress enough is enough. 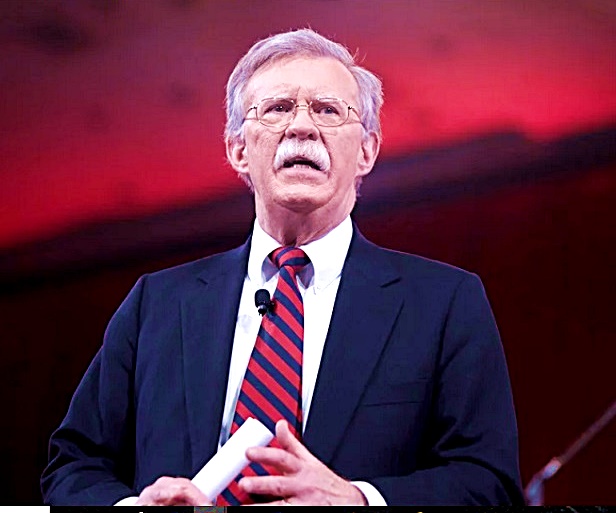 The Trump administration ought not to concede one inch to those who wish to sideline the personnel and stifle the policies that would make its counterjihadist agenda a reality.

The attacks on former ambassador John Bolton following his appointment as National Security Advisor (NSA) have inadvertently served as some of his strongest endorsements.

First there were the hysterical cries of “neocon warmonger!” This would come as news to the NSA-designate, who was never a “liberal mugged by reality” but a self-identified “Goldwater conservative” from the start; explicitly rejects the belief in democracy-building as imperative to achieving America’s national interest under democratic peace theory; and suggests, exaggerating for effect, that following the removal of Saddam Hussein, as soon as practicable he would have told the Iraqis, “You’re on your own. Here’s a copy of the Federalist papers. Good luck.”

Although the “neocon warmonger” moniker is inapt, to say the least, maybe it is not such a bad thing if our enemies buy this line. In fact, this may be part of President Trump’s strategic rationale as a dealmaker for elevating a “peace-through-strength” realist portrayed as a cantankerous cowboy to the top of the National Security Council.

Then followed another narrative: Bolton is not only a real-life Dr. Strangelove, but worse. He is actually an adroit bureaucrat—“crazy and dangerous.” Then-senator Joe Biden, a man prone to malapropism, actually put it best when, in Bolton’s retelling, Biden said of him in 2005: “My problem with you, over the years, has been, you’re too competent. I mean, I would rather you be stupid and not very effective.”

But the truly revelatory attacks concern Bolton’s positions on Islamic supremacism, which reflect an understanding that jihadists pose a mortal threat that must be countered using every element of national power. You know these attacks are meaningful partly because they have been made under cover of a smear campaign.

Bolton has been cast as an “Islamophobe” for the thought crime of being a counterjihadist who supports other counterjihadists. The charge of “Islamophobe” is a baseless, intellectually dishonest, and lazy slur. Although it does not deserve to be dignified with a response, it goes without saying that there is nothing to indicate Bolton harbors an irrational fear of Islam, and everything to indicate he holds the very rational belief that we must defeat Islamic supremacists who wish to subject us to their tyrannical rule or destroy us.

“Islamophobe” is being lobbed at Bolton to try and discredit him and ultimately scuttle policies he supports intended to strike at the heart of Islamic supremacism. The “tell” is that the articles raising such accusations frequently cast counterjihadist policy positions themselves as de facto evidence of Islamophobic bigotry.

As the representative par excellence of the position that America should exit the Iran deal, it should come as no surprise that the Iran deal echo chamber in exile has sprung into action in savaging the ambassador with the most outlandish of insinuations. For the Islamophobia campaign, the lesser-recognized and perhaps more insidious Muslim Brotherhood echo chamber has been activated. Bolton is on record as supporting its designation as a terrorist organization, and Brotherhood apologists and true believers cannot abide this.

Either We Work With Terrorists or We Don’t

Recall that the national security and foreign policy establishment has long held that as a “political Islamist” group, the Muslim Brotherhood ought to be treated as a legitimate diplomatic partner. The theory is that we have to choose between violent and seemingly peaceful Islamic supremacists, ignoring the fact that their differences are tactical and strategic, not ideological. They are all still Islamic supremacists.

Most infamously, the Obama administration supported the ascension of Mohamed Morsi, leader of the Egyptian Muslim Brotherhood, to president during the Arab spring, with predictably horrific consequences in particular for the nation’s Christians that persist even in the era of the much-maligned counterjihadist Gen. Abdel Fattah al-Sisi.

Such disastrously naïve policy pushes ignore that the Muslim Brotherhood is the tip of the Sunni jihadist spear. It’s the ideological fountainhead from which violent jihadist groups from Hamas to al-Qaeda and ISIS spring. The “political” element of the Muslim Brotherhood is, if anything, more pernicious precisely because its adherents do not goose-step, guns in hand, in the public square.

No, the political arm engages in political and ideological warfare, tactfully seeking to impose its will through policy and subterfuge. “Social welfare” activities provide a convenient cover for the group’s ultimate aims. As the Brotherhood put it in its 1991 Explanatory Memorandum on the General Strategic Goal for the Group in North America:

The Ikhwan [Muslim Brothers] must understand that their work in America is a kind of grand jihad in eliminating and destroying the Western civilization from within and sabotaging its miserable house by their hands and the hands of the believers so that it is eliminated and God’s religion is made victorious over all other religions.

On account of the Brotherhood’s nature and activities, it has been designated as a terrorist organization from Egypt to Saudi Arabia and the United Arab Emirates. A bill first introduced by Sen. Ted Cruz in 2015, calling for the U.S. secretary of state to submit a report to Congress on designating the Brotherhood as a foreign terrorist organization in America, lays out several other reasons the group merits this, including:

The [group’s] explicit calls for violent jihad, with the end goal of imposing Islamic law over all the world of the group’s founder and spiritual leader Hassan al-Banna, and the consistently violent Islamic supremacist content of the Brotherhood’s core membership texts

Do What We Like or Get Smeared as a Bigot

The Brotherhood undertook an extensive lobbying and information operation designed to dissuade the administration’s plans, reportedly backed by millions of dollars. The U.S. foreign policy establishment quickly proliferated articles and comments in prominent mainstream publications defending the Muslim Brotherhood against charges of being a jihadist group, adding that designated it as such would be impractical and impracticable. Notably, The New York Times went so far as to print an op-ed in the Brotherhood’s defense written by Clinton Foundation-linked Egyptian Muslim Brotherhood spokesman Gehad el-Haddad.

In the midst of this flurry of articles, it leaked to the media that the CIA and State Department both produced memos against Muslim Brotherhood terrorist designation.

Concurrently, counterjihadists throughout the Trump administration were subjected to a barrage of attacks. Many would ultimately be sidelined, though some like Secretary of State-designate Mike Pompeo survived. He, like Bolton, is being attacked as an Islamophobic bigot as well.

Bolton recognized at the time that these events were not random. During a July 2017 interview he noted:

There’s been an amazing campaign. It’s always amazing to me how these stories and op-eds and lines of chatter appear simultaneously, all very well-coordinated…The argument being the Muslim Brotherhood is a complicated organization, not every part of it is devoted to the support of terrorism. Some of them do humanitarian work and so on; a declaration that the entire Brotherhood is a foreign terrorist organization would actually buttress the cause of the jihadis; so, therefore, don’t do anything.

Let’s take the notion inherent in that argument as having some validity, that there are pieces of the Muslim Brotherhood that don’t qualify under the statutory definition we have of a foreign terrorist organization…My response to that is, ‘Okay, we need some careful drafting based on the evidence we have now that excludes some affiliates, some components of the Muslim Brotherhood from the designation.’ I’m prepared to live with that, of course, until we get more complete information.

This position is what really draws the ire of the Brotherhood echo chamber. CAIR, the unindicted co-conspirator in the previously mentioned largest terror financing case in U.S. history, published a press release condemning the appointment of “Islamophobe John Bolton” as NSA, citing corroborating articles from such non-biased sources as Think Progress, The Nation, Islamophobia.com, Vox, and Huffington Post.

As I have written previously, CAIR’s Muslim Brotherhood and jihadi ties are numerous and longstanding, involving not only its founders and present leaders to Hamas, but its harboring of apologists for Islamic terrorism, and alleged impeding of counterterrorism efforts.

Bolton’s endorsement of designating the Muslim Brotherhood a terrorist organization illustrates a keen understanding of the size, scope, and nature of the Islamic supremacist threat that the national security and foreign policy establishment lacks. It is a proxy for a worldview that if followed to its logical conclusion would turn our largely futile efforts to beat back jihadists over the last 17 years on their head. This view takes Islamic supremacists at their word in their desire to impose upon us the Sharia-based, totalitarian theopolitical ideology to which they adhere. Hence the pushback.

Applying this worldview would lead to decisions antithetical to the progressive Wilsonian internationalists and political Islamists on myriad issues in the Middle East, including:

The Trump administration ought not to concede one inch to those who self-evidently wish to sideline the personnel and stifle the policies that would make its counterjihadist agenda a reality. This specious and slanderous smear campaign reflects all the better on the appointment of Bolton as NSA.

Ben Weingarten is a senior contributor at The Federalist and senior fellow at the London Center for Policy Research. He is the founder and CEO of ChangeUp Media, a media consulting and production company dedicated to advancing conservative principles. You can find his work at benweingarten.com, and follow him on Twitter @bhweingarten.

Copyright © 2018 The Federalist, a wholly independent division of FDRLST Media, All Rights Reserved.