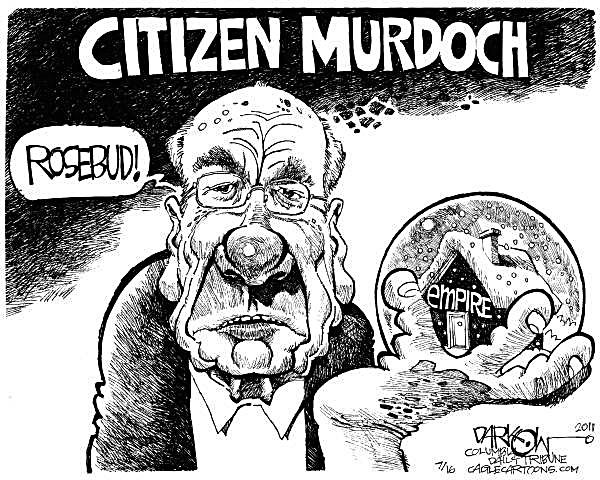 Yesterday I posted my concerns that Fox News was moving leftward on the political spectrum. Today I discovered that typically Left oriented Mediaite broke the story that Conservative media moguls are mulling over the idea of beginning an alternative Conservative News Network due to the Murdoch boys primping Fox toward the Left.

Then in trying some confirmation to Mediaite I ran into a Freedom Outpost article claiming there is ample proof that Bill O’Reilly’s termination from Fox News was a smear campaign from uber-Left media outlet Media Matters:

Liberals everywhere are rejoicing at the latest news that their TV boogeyman, Bill O’Reilly has been forced out of Fox News, his longtime home, for alleged sexual harassment. Those on the left shouldn’t be too quick to cheer however; the only reason these allegations are surfacing is because of a targeted smear campaign by politically-linked parties, further jeopardizing the independence of the media. Or perhaps they just don’t care?

… Right Wing News shows the evidence that the George Soros-funded group Media Matters was behind the smear campaign against O’Reilly. The smoking gun was an email from the Bonner Group, a leftist fundraising Super PAC for Hillary Clinton, which openly thanked Media Matters for the exposé. Whether O’Reilly is guilty or not, this is further proof of the tactics the globalists will resort to in order to silence dissenting media opinions. Who’s next on their list?

Are Fox News execs about to hand over the scalp of their ratings king to the smear group Media Matters? (UPDATE: Yes.)

On Wednesday, talk radio host Glenn Beck tweeted an email from the Bonner Group, a leftist fundraising firm that works for Media Matters. 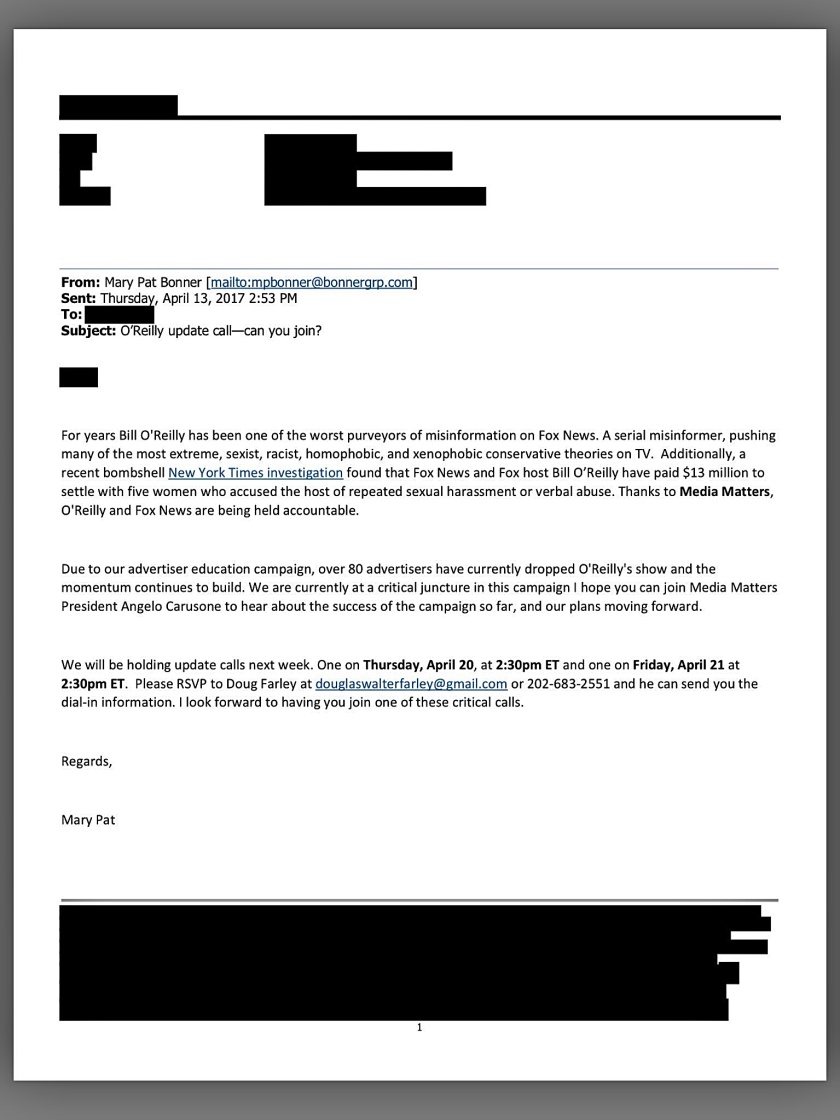 The April 13 email is an invitation to join a briefing call on Media Matters’ campaign against the network’s biggest star.

“Thanks to Media Matters, O’Reilly and … READ ENTIRETY (Did George Soros Orchestrate the Firing of Bill O’Reilly from Fox News? By MICHAEL DEPINTO; Freedom Outpost; 4/24/17)

If I didn’t receive email alerts from Liberty Headlines, I would never have heard (at least at this point) that an alternative Conservative News network might be in the future. The Independent Sentinel uses Mediaite as a source, but does add this:

Axios claims he’s one of the people meeting with “high-powered television executives and potential funders” to talk about a new network.

Roger Ailes is said to be involved in the talks.

The “pitch is that the network could immediately reach at least 85 million homes,” Mediaite writes.

There are certainly plenty of conservative powerhouses – some out of work – to pick from that could star on a new network. They might even be able to lure some executives away. (Serious Discussions of a New Right-Leaning Network Are Taking Place – Updated; By S. Noble; Independent Sentinel; 4/29/17)

Here is the Mediaite story.

On the heels of major shakeups at the Fox News Network, an alternative conservative network is being actively discussed amongst conservative fat cats.

A well-placed source close to the proposal tells Mediaite that serious discussions are underway to create an alternative conservative cable network on the belief that the Fox News Network is moving too far to the left. The source, who is engaged in the talks, says a meeting is planned for today with two prominent high-powered television executives, some underperforming conservative networks and people who have an interest and the ability to fund a new network.

The potential aim? Putting “the old band” back together. There are certainly plenty of (out-of-work?) conservative powerhouses to pick from that could star on a new network, and perhaps even some executives from within Fox News who might be lured by the new opportunity. Could the new channel include stars like the ousted Bill O’Reilly, who didn’t waste much time hitting the podcast waves after he was fired amid a sexual harassment scandal? Could Tomi Lahren, the conservative mega star, who was recently sidelined at The Blaze also take on a prominent role? The exact “who” won’t be clear until the deal is more defined but the source says the pitch is that the network could immediately reach at least 85 million homes.

This news comes on the heels of a long profile in last weekend’s New York Times which paints a picture of a changing Fox News Network with Murdoch’s sons, James and Lachlan, CEO and co-chairman of parent company 21st Century Fox, at the helm. The piece struck fear into the minds of some Fox News’ hardcore conservatives with talk of the sons wanting to rid the company “of the old-guard culture on which their father built his empire” and bringing “a warmer and fuzzier workplace” that would move away from an “anti-politically correct environment.”

On Thursday, New York Magazine‘s Gabe Sherman, a constant thorn in the side of Fox News, reported that “sweeping management changes” may be coming to the network as well. Sherman’s report cited three anonymous sources that contend that the network’s co-President Bill Shine recently asked the Murdoch sons to release a statement in support of him amid the roiling lawsuits and scandals. Both Fox News and 21 Century Fox have vigorously denied that Shine made such a request but the report by Sherman prompted a rather mysterious tweet about the “total end of the FNC as we know it” by the network’s biggest remaining star, Sean Hannity:

“I just don’t see Fox News and Sean having a long relationship. If Sean becomes available, you have 100 percent turnover in primetime and a huge opportunity,” a television executive, who didn’t want to be identified, but is involved in some of the talks, told Mediaite.

“I’m working on it (the new conservative channel) hot and heavy,” the source said. “It’s live, it’s real.” The new channel could come to fruition within the next 10 to 12 months, the executive said.

It is no surprise that a savvy investor would see the turmoil within Fox News as a major opportunity. As The Times piece noted, analysts estimate that Fox News produced 25 percent of 21st Century Fox’s operating income last year or a whopping $6.6 billion. Conservative news remains a cash cow for investors, but the media landscape is quickly changing with younger viewers “cutting the cord” and turning to alternative over-the-top live streaming platforms like Hulu, Amazon, Roku and YouTube TV. Could a conservative alternative channel with some big names have an edge on the 20-year-old conservative network? Stay tuned. Our source is convinced it can happen.

Update 12:58 p.m: This article has been updated with a quote from a television executive who is involved in the talks.

I am a member of a Facebook group called 1683 AD. The year is a reference to the last time Islamic military invasion attempting to enslave Europe to Political Islam. In this case King Jan III Sobieski decisively won the battle that prevented the conquest of Vienna from Ottoman Turks. I am an American; however if anyone spends anytime at Facebook 1683 AD it is apparent most of the members are European. And I am guessing the Europeans in this case are mostly citizens of the United Kingdom (UK) because the predominant language is English.

Since the 1683 AD group members are quite anti-Islamist and has a message to prevent the Islamization of Europe (and/or the UK); I am certain these brave fellows are branded as racists and promulgators of hate-speech. After all Dutch politician Geert Wilders has been under prosecution for hate-speech and incitement to violence with his film Fitna. The film Fitna merely utilizes quotes from the Quran, the words of Muslim Clerics and footage that verifies the blight of Political Islam. The plight of Geert Wilders in Netherlands is the Free Speech limitations imposed by a European culture that is moronically so into Multicultural Diversity they are willing to sacrifice their Western heritage to an immigrant Islamic culture that is increasingly becoming anchored in Europe by a high birthrate and demanding that the practices of Islamic Culture such as Sharia Law become accepted and supersede the Rule of Law. This is the very rule of law that still has some Leftist accepted Freedoms.

Now that I have talked up 1683 AD, I feel constrained to cross post a very lengthy post from the 1683 AD blog version of the Facebook group. The information disseminated is about the difficulty of developing Conservative Talk Radio on the level that exists in America. You see the European governments and the EU have control of the spoken media. Anything of a Conservative nature or anti-Islamist nature has to go through the approval path of government influenced and Leftist controlled media. Without that approval there is no alternative for voters to fully comprehend that Socialist practices are destroying government budgets and that the purist nature of Islam is a threat to the Freedoms still available to Europeans.

Another reason I am cross posting the 1683 AD post is because the American Left wishes to impose European Multicultural Diversity and limits on Free Speech in American Islamism is using First Amendment rights of Free Speech and Religious Freedom to overthrow the Constitution and replace the greatest Document outlining Life, Liberty and the Pursuit of Happiness with despot theopolitical Islam and Sharia Law.

My fellow Americans take the time to read the 1683 AD post to understand that which could be instituted in America.