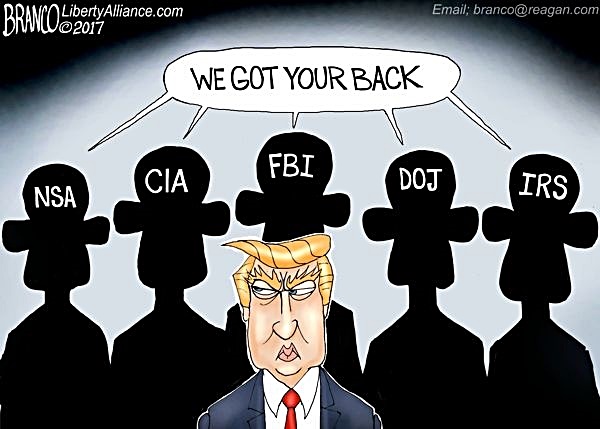 On March 7 Daniel Greenfield posted “#OBAMAGATE: EXPOSING THE OBAMA DEEP STATE” on FrontPageMag.com. The piece was so passionate I picked up for three blogs I post on (HERE, HERE & HERE). One of my favorite blogs to read is The Counter Jihad Report. That blog is a much better aggregator of news and opinion pieces than I and they also picked up Greenfield’s piece on Obama’s Deep State intrusion on President Trump’s Administration.

Unlike my cross posts, CJR posted five videos and a list of other linked titles on the Deep State issue that were unrelated to Greenfield’s FrontPageMag.com original post.

That portion is also informative and gratifying thus I am cross posting CJR’s part of the post separate from Greenfield’s.

(As an update to the CJR post, I noticed Youtube had taken down one of the videos. I decided to go with a replacement version. I matched the title to what I believe was the same material as the video removed by Youtube. I found two versions of Monica Crowley speaking on Hannity about the viciousness of the American Left to bring down the Trump Administration. I am going with the minute-ten version of Ms. Crowley going off on the Left about their agenda toward President Trump. The unedited Fox News version begins with condolences to Crowley as Alan Colmes’ sister-in-law followed by the Left’s personal attacks on Crowley over now debunked plagiarism accusations. Then Hannity proceeds to talk about the general Leftist assault on Trump and members of his Administration. The full Fox interview is entitled, “Monica Crowley: What happened to me was a political hit job”. On this blog you will view the excerpted Trump News Network version.)

Obama is quietly building a shadow opposition government to sabotage Trump and Republicans as well and their policies, while at the same time saving his legacy. According to Paul Sperry, there are currently 32,000 professional agitators trained in Alinsky’s rules for radicals tactics. Another 25,000 are undergoing training now with a third training summit coming up in March, 2017.

The ‘Shadow Government’ formed by Barack Obama is a radical Alinsky group being professionally packaged and labelled “Organizing For Action” or ‘OFA’.

Further detailed quotes and URLs from the video are below:

“The Obama friendly media will continue to cover this up as long as they can so that Obama can get this ‘Shadow Government’ built up.

Republicans do not know what they’re up against here.

Obama is quietly building this shadow opposition government to sabotage Trump and Republicans as well and their policies, while at the same time saving his own legacy.

He’s doing all this through a radical Alinsky group that he founded called “Organizing For Action”, OFA. They have an army of agitators and they are fanning out, they are going to hit Republicans even harder next week when they go home for recess, back to their home districts. They took it out of the Obama campaign in 2012, it was part of that campaign, and they turned it into a 501C4 so they don’t have to show their donors.

It starts as a training center. These are professionally trained agitators, they’re schooled in Alinsky’s rules for radicals tactics, a program that lasts six weeks. About 32,000 have gone through this training. There are another 25,000 under training now with another training summit coming up in March.

We haven’t seen the worst of these protests, these are really going to hit hard.

Obama’s the guy whose behind all this. He’s the mastermind.

If you look at the bottom of Obama’s website at https://barackobama.com/ in small print at the center of the page, there are links to the Obama Foundation and the Organizing For Action (OFA). The links to these two organizations are listed below.

Eventually, Obama wants to merge the Obama Foundation and the OFA. He also wants Tom Perez, Obama’s Labor Secretary from 2013 to 2017, to head the DNC. With Perez heading the DNC, OFA’s proprietary database of voters which has never been shared with the DNC, OFA’s email list consisting of millions of Obama supporters and OFA’s donor list would be made available to the DNC.

Once the DNC receives these from OFA, you have a super structure with a formidable organizing infrastructure.”
~ Paul Sperry, New York Post columnist

VIDEO: Monica Crowley on Hannity “They are out for Blood..This is a War”

VIDEO: Judge Napolitano: For the first Time in Modern Era We Have President Who Is Adversary of Deep State

Posted by The Glazov Gang

About The Counter Jihad Report

There is an urgent need for the public to become informed about the Global Islamic Jihad Movement. We must demand from our leaders that they become familiar with Islamic Law and jihadist ideology so that our counterterrorism policies can better protect us from this growing threat.

This blog is mainly a news aggregating site but also includes an extensive library of resources for studying Islam and networking with other Counter Jihad activists. My goal has been to pull from a variety of the most trusted and reliable sources to educate the public on the counter jihad movement. The many RSS feeds and counterjihad twitter feed in the sidebar are meant to provide a time saving jumping off point to access all the headlines and breaking news.

My Interest in Islamic Jihad stems from the 1983 Hezbollah truck bombing of the U.S. Embassy in Beirut in which my cousin, Ken Haas, was killed. Ken left a career as a philosophy professor to work for the CIA and was the Station Chief in Beirut. He and … READ THE REST