The Biden Crime Family has been getting away with Pay-2-Play illegal schemes even before idiot drug addled/illicit sex addicted Hunter Biden decisions began to expose family crimes to the light of day. Since many of those crimes are with adversaries of America, National Security issues are involved in those crimes which quite probably expose greed inspired treason. This cross post by Charles Wills looks at Hunter’s illegal involvement with Communist China even before Hunter forgot he left a laptop at a computer repair shop. Without spelling it out, Wills shows that various Federal Agencies (e.g. FBI, CIA, NSA, DOJ, State Dept & probably more) sat on the info rather than making sure criminal prosecution proceeded indicating CORRUPTION.

Or support by getting in the Coffee from home business –

OR just buy some FEEL GOOD coffee, that includes immune boosting products. My Facebook account has been completely disabled. I never incite violence (unlike the Left). Facebook allowed me to re-sign as a beginner with Group memberships absent. Other than likes, I’ll not be posting. YOU should Combat censorship by sharing voluminously. NEVER cave to the Left! VOTE TRUMP!

Selling America out for personal profit

Democrats appointed corrupt bureaucrats to do their bidding. They turned the FBI into their own enforcers, and used the justice system to punish their opponents and hide their own criminal activities 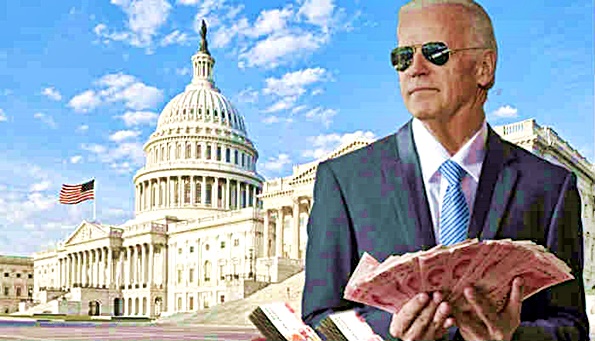 In the 1800s, if a government official helped an adversary or foreign nation acquire ownership in a U.S. corporation, and they were caught, anyone involved would have been tried for treason. However, Democrats have been selling America out since they sold the coining (issue) of U.S. currency to foreign bankers in 1912, through the Federal Reserve Act. Far too many Americans are unaware of the fact that Democrats sold Americans into servitude in 1912.

It’s servitude because foreign bankers were given control of our currency and empowered to collect interest on every dollar in circulation by taxing the personal income of all Americans. Then Democrats falsely altered the Constitution—that forbids personal income tax—to allow them take a portion of our earnings.

I could list dozens of examples where Democrats sold us out for personal profit, but for the sake of brevity, I will stick with the most current Democrat sellout.

Back in September, the Michigan Star ran an article titled, “Hunter Biden-Tied Fund Helped Communist China Obtain a Michigan Auto Parts Maker”. The article ran before the Hunter Biden laptop revelations. It outlined how Joe Biden, who promoted friendly dealings with Communist China, suddenly changed his tune. This is an excerpt from that article:

“For Biden, a four-decade advocate of trade and friendly relations with Beijing, it was a stunning turnabout… But for U.S. security experts, it was remarkable for another reason: An investment fund named Bohai Harvest RST (BHR) partly owned and directed by Biden’s son, Hunter, and Secretary of State John Kerry’s stepson, Chris Heinz, had just a few years earlier played a vital role in facilitating the sale of the Michigan-based auto parts maker Henniges Automotive to one of China’s main military aircraft makers, Aviation Industry Corporation of China or AVIC.”

The article noted that AVIC had been placed on a Commerce Department blacklist just months before the deal was approved by the Obama administration, and it went on to say: “The Obama administration allowed the transaction to proceed even though Henniges possessed “anti-vibration technologies with military applications” and AVIC had a history of ties to China’s military aggression dating to at least 2007.”

Why didn’t the FBI investigate this? They had to know about the deal because the Michigan Star, Breitbart and others knew about it and exposed it.

Furthermore, since the Michigan Star article ran, Hunter Biden’s laptop has revealed that the Biden family received millions of dollars from the Communist Chinese government. However, no members of the Biden or Kerry family have been interviewed by the FBI, that we know of, although the FBI has had Hunter Biden’s laptop since last December. The FBI has only interviewed Tony Bobulinski, but we could say they had to because he went public.

It’s important to note that none of Biden’s accomplices have had their homes and offices raided by armed FBI agents in predawn raids; like happened to supporters of President Trump during the phony Russian investigation. That proves there’s a dual justice system and crooked Democrats are above the law. Hillary was above the law and judging by the FBI’s current behavior, so are the Bidens.

In my opinion, the FBI would have acted different if the same foreign deals were done by a member of the Trump family. If Donald Trump had been paid $500,000 by the Russians shortly before his wife, the Secretary of State, approved a deal that gave the Russian government 20% of the U.S. uranium supply, both of them would probably be in jail now. That’s the real Russian collusion story.

And if a member of the Trump family had been paid millions by Communist China, the FBI would have leaked the information to their media accomplices to destroy his campaign.

As a matter of fact, the Iran deal is suspicious because governments and corporations do not send cash to foreign nations or debtors. And I’m certain, that if Donald Trump Jr. had received millions from deals with the Communist Chinese, that his home, and the homes of his associates, would have been raided, and Donald Trump would not be running for president. He would have been indicted to stand trial for treason.

Judging by the FBI’s inaction and silence, in reference to the China-Biden deals, nothing has changed within the justice system. A double standard of justice still exists. I say that because the FBI and the Justice Department have had ample time to apply the law equally, and they refuse to. For that reason, I believe it’s time to fire everyone at the top of the FBI as well as their accomplices in the Department of Justice.

Finally, Democrats appointed corrupt bureaucrats to do their bidding. They turned the FBI into their own enforcers, and used the justice system to punish their opponents and hide their own criminal activities. As a result, honest people within the justice system, as well as the American people, are left to suffer the consequences. That’s why we face the possibility that another corrupt socialist Democrat will regain the reigns of government. That’s the consequence we are facing and we can thank the FBI and Justice Department for it.

Charles Wills is a retired Engineer. Since retirement, he has devoted much of his free time to reading and researching world and biblical history. He enjoys reading and collecting old books, especially textbooks published before the turn of the 20th century, as well as writing about the wealth of information hidden in them.

Pursuant to Title 17 U.S.C. 107, other copyrighted work is provided for educational purposes, research, critical comment, or debate without profit or payment. If you wish to use copyrighted material from this site for your own purposes beyond the ‘fair use’ exception, you must obtain permission from the copyright owner. Views are those of authors and not necessarily those of Canada Free Press. Content is Copyright 1997-2020 the individual authors. Site Copyright 1997-2020 Canada Free Press.Com