Israel’s Jewish Left is so thirsty for power it makes a power-sharing deal with Jew-hating Israeli Arabs. It is no wonder that self-loathing Jewish Multicultural Leftist are leading their nation to destruction. Adina Kutnicki lays out the truth in this article.

WITH all eyes on the fall-out from Coronavirus, it is at this critical juncture in time that Israel’s Blue & White leadership, a so-called “centrist” party, sunk to the depths of betrayal. Yes, they will go down in Israeli history as the double-crossers of the Jewish homeland – and it is no exaggeration! Ignominious.

AS former Generals, the “Three Banditos” (Benny Gantz, Gabi Ashkenzai, and “Bogie” Ya’alon, + featured second to the right, Yair Lapid….a dumb as bricks career politician who entered politics on his father’s coattails, that is, Tommy….nepotism at its ugliest form) entered the political arena with a leftward tilt, never mind their (past) Zionist bonafides. Lo and behold, having fought the very same Arab Muslim enemies on the battlefield, they have now embraced the radical, anti-Zionist, anti-Semitic, pro-terrorist Arab Joint List as their coalition partners!

EGREGIOUSLY, in a most cynical betrayal, they have aligned with the enemies of the Jewish State to cement their grips on power. Simply put, to catapult into the political fray, they found it politically expedient to curry favor with Israel’s leftist triad; the media, the legal, and the academic fraternities, among others – those who never miss an opportunity to back-up the fifth column within the Jewish State! By the way, the aforementioned triad are mirror images, ape-like, of the fascist-left in the U.S. Yes, it is true.

CONSIDER the following as indictable charge-sheets:

When the Joint List, the Arab party that emerged as Israel’s third largest in the recent round of elections, endorsed Benny Gantz as its candidate for prime minister on Sunday, pundits took to every available perch to declare the moment historic. After all, no Arab party has ever endorsed a Jewish leader, and Ayman Odeh, the party’s Obama-esque leader, seized the moment properly by tweeting a line from Psalms. To many, this felt like a breath of fresh air, a surge of coexistence and compromise after Benjamin Netanyahu’s hard-line policies.

The hosannas, however, are premature: The Joint List, sadly, remains a vehemently anti-Zionist party whose members have often expressed their support for convicted terrorists. All it takes is a brief look at the party and its principles to learn why Gantz—whose Blue and White party is currently Israel’s most popular, with 33 Knesset seats—should immediately and forcefully reject this endorsement.

Most egregious among the party’s members, perhaps, is Heba Yazbak. A doctoral student studying gender and colonialism at Tel Aviv University, Yazbak has occasionally taken to Facebook to praise convicted terrorists, most notably Samir Kuntar. On April 22, 1979, Kuntar, the teenage son of a wealthy Lebanese family, landed a rubber dingy on the shore of the northern Israeli town of Nahariya. Together with three other terrorists, he shot and killed a police officer before breaking into the apartment of the Haran family and taking them hostage. Smadar, the family’s mother, managed to hide with her 2-year-old daughter, Yael. Fearful that the toddler’s cries will give them away, she stifled the child’s whimpers, accidentally suffocating her to death. Kuntar then led the family father, Danny, to the nearby beach, together with his 4-year-old daughter, Einat. When IDF soldiers arrived to free the hostages, Kuntar executed Danny in front of his daughter’s eyes. He then grabbed Einat, and, using the butt of his rifle, smashed her head against a nearby rock.

Kuntar was released from Israeli prison in 2008 in return for the bodies of two fallen Israeli soldiers. He received a hero’s welcome from Hassan Nasrallah, the leader of Hezbollah, and continued to plan attacks against Israelis, earning himself an international terrorist designation from the United States Department of State. He was killed in 2015 in a strike south of Damascus, which many believe was orchestrated by Israel.

In addition to praising Kuntar, Yazbak also publicly supported an Israeli-Arab citizen indicted for being a Hezbollah spy. Israel’s Supreme Court—which approved the disqualification of two far-right politicians for alleged incitement to violence—found no problem with Yazbak’s opinions, allowing her to run for office.

After being accused of spying for Hezbollah, Bassel Ghattas, another Israeli-Arab MK, served a prison sentence for smuggling cellphones to a convicted Palestinian terrorist.

Just behind Shehadah, at No. 3, is Ahmed Tibi, the former adviser to Yasser Arafat. A popular fixture with Arab leaders the world over, Tibi has cozied up to anyone from Bashar Assad to Muammar al-Qaddafi. In 2012, he was reprimanded by the Knesset after delivering a speech in Ramallah to celebrate the International Day of Shaheeds, or martyrs. “The occupier wants to call you terrorists,” he said, “but we say there’s nothing more noble than dying for your homeland.” The Knesset’s Ethics Committee denounced Tibi, calling his speech “cheering on terrorism and violence.”….continue reading the “who’s who in Arab terror” that Blue & White leaders have joined forces with!

“You are all to blame for breaking the delicate balance that has always been within the Knesset during the formation of the government instead of putting the small politics aside and establishing a unity government which is so vital at the moment,” tweeted Peretz.

Members of the Joint List have consistently made anti-Israel and anti-IDF statements and shown support for terrorists.

Several right-wing politicians and victims of Arab terrorism expressed rage after the Blue and White party led by Benny Gantz, which assumed control of several Knesset committees, gave the chairmanship of the Labor, Welfare and Health Committee to the Arab-majority Joint-List.

The Welfare Committee has the care of terror victims under its purview.

Member of Knesset (MK) Kitty Shitrit of the Likud party accused Blue and White of “carrying out a targeted assassination of the public’s trust and seriously hurting the feelings of the bereaved families.”

Blue and White stated during its last campaign that it would not rely in any way on the Joint List for support, a promise it broke days after the elections.

Shitrit added that “there is no way to obscure this disgrace in which terrorist supporters are put at the head of a committee that deals, among other things, with the rehabilitation of the IDF’s disabled, with helping victims of terrorism and with the confiscation of allowances from terrorist families.”

The “three generals,” meaning Blue and White leaders Benny Gantz, Moshe Ya’alon and Gabby Ashkenazi, “will be forever remembered in infamy,” she said.

Elihai Ben Yishai, whose sister Ruth, her husband Ehud and three of their children were butchered in a terrorist attack in March 2011, called the new situation the “blood paradox.”

MK Ahmed Tibi of the Joint List, was “consultant to arch-murderer Arafat, and will chair the Welfare Committee and that take care of the status and rights of …victims of terrorism.”

TELLINGLY, all of which is best explained and fully exposed by the inestimable Caroline Glick via The New Arab Bloc and the Future of Israeli Sovereignty.

To this end, LISTEN IN FULL to the linked video recording. Do pay rapt attention to the part where she discusses HUSSEIN Obama’s interference (in 2015) in Israeli politics; his mischief-making, which, in turn,  gave rise to the (never before) empowered Arab Bloc! Mind you, it is hardly coincidental nor incidental that Blue & White hired the Obama administration’s chief political strategist to guide them! Hmm.

FINALLY, as enraging as it is that Israel’s war-horses sold out the national interest – yes, they did – it was not unexpected at this end. Not at all. This is more than supported by several analyses – two of which are prima facie evidence thereof. In fact, it was only a matter of timing when the “other shoe”, so to speak, dropped. It did.

(The Joint List, March 11, 2020, looking triumphant – in the “cat-bird’s seat”, again, due to the “Three Banditos” and HUSSEIN Obama’s electoral interference – as they march into “negotiations” with Blue & White!) 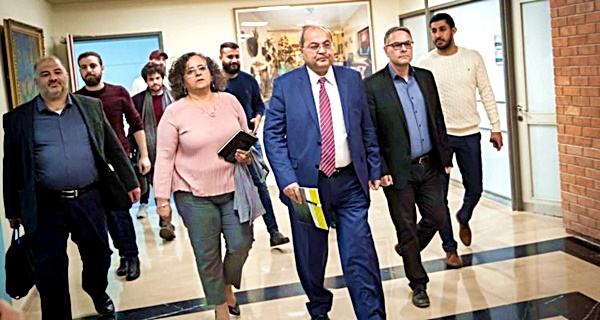 The Coronavirus Panic seems to have affected giving on this blog. I am on a disability but my wife has done quite well on a sales job and a Network Marketing healthy coffee (healthy as in I’ve lost 82 lbs. in a year) business that also provides vitamin-mineral-anti-oxidant supplements that might be beneficial for your family. I’d love to share the coffee business corporate name, but if you know anything about Network Marketing companies, they get a bit cranky about that practice in their policies and procedures. Suffice it to say my wife’s Network Marketing business provides FREE websites for online marketing. In my wife’s case she has bought several Domain Names linked to her website. My darling wife has told me the company has waved the sign-up fee for buyers during the pandemic crisis. You can access Diana Houk’s coffee network via this domain name: http://www.skinnyoptimumcoffee.com/.

Addressing my revenue issue. Among the many medical I’m overcoming I am only sharing one medical bill issue. I use a CPAP machine/mask in my sleeping hours. I need 10 people to donate $5.00 to my PayPal account to help pay a CPAP supply bill. It is my opinion this Pandemic is temporary and when over, our family revenue issue will self-correct. Until then please consider a onetime donation using the PayPal button on this Blog or this NCCR PayPal embedded link.

(UPDATE: I am pleased to announce the blessed launch of America’sCivilWarRising. org, ACWR, on March 10, 2020. As an instrumental part of this unique, no-holds-barred Intel/Patriotic site, rest assured, in due course, it will cause an earthquake across the Internet)

In addition to being an investigative journalist, I am a consultant to a privately-held Homeland Security entity – related endeavors, too. My first book, BANNED: How Facebook Enables Militant Islamic Jihad,  is available online and in major bookstores. In under 24 hours at AMAZON (Sept. 2016), it jumped to Number One in HOT New Releases!

For the most part, my work-product revolves around militant Islamic jihad, with a particular emphasis on the Muslim Brotherhood Mafia. My geo-political analysis appears at various Zionist and Conservative media outlets. As an example of my long-standing efforts, I contributed to an in-depth investigative series at FrontPage Magazine with Lee Kaplan from 2003-2007. We are still working together.

Segue over to his interview at Iran’s Press TV (one of many tv debates/interviews) where he debated a rabid self-hating Israeli, a so-called Jew – who supports every manner of terror against Israelis/Jews, even the kidnapping (subsequent murder) of 3 Israeli Jewish teenagers. It can be found here.  He is a … READ ENTIRETY