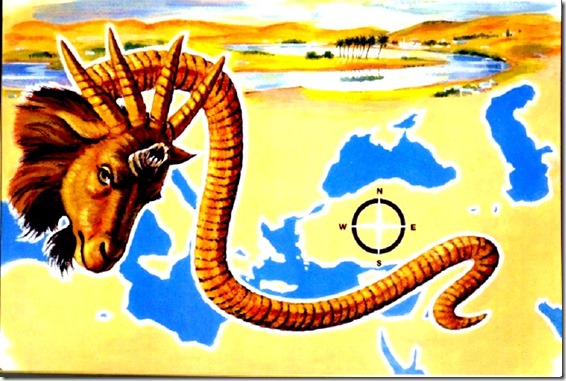 This is an interesting interpretation of mixing history with Scripture to form an opinion of the End Times. Some of James Albright’s history is a bit off. For example Persia never did conquer Greece. After Macedonian King Philip conquered the Greek City States, Philip’s son Alexander became King and went on a global conquest east Macedonian-Greek kingdom which conquered Persia – present day Iran.

Otherwise Albright has some interesting theories that are different from other eschatology portrayals of the Last Days. I grew up being told the Antichrist would come out of the European Union because the land mass roughly corresponded to the old Roman Empire. Albright believes the Ten Nations of Daniel will be Middle Eastern with Saudi Arabia being the chief of the Ten. The thing is before the Roman Empire split into East and West its entirety stretched from present day UK right up through the Middle East. So Albright’s theory has some substance to it.

One thing is that Albright implies in the video this was revealed to him prophetically be Jesus. Without watching the video more than once I’m not sure if Albright believes he saw this in a vision or dream.

Watch the 24 minute video on the Last Days and as a wise teacher once told me – Be at least as smart as a cow and eat the hay and spit out the sticks. Let me know if you find more or sticks that are available to digest.

The Fulfillment of Dan 8

This video reveals that the fulfillment of Dan 8 began with the rise of Ayatollah Khomeini in Iran and Saddam Hussein in Iraq. The ram butting north south and west began in 1979 with the Iran Iraq War and continued to be fulfilled through the Persian Gulf War that took place in 1991. The horn that broke and the four conspicuous horns that arose in its place symbolized when Osama bin Laden revolted against King Fahd and the four major umbrella terrorist organizations, which include al-Qaeda, Muslim Brotherhood, Hamas and Hezbollah, began growing and committing terrorist acts towards the four winds of Heaven. Ayman al-Zawahiri, who is the current leader of al-Qaeda was the first king described in the vision, which means that Saudi Arabia is one of the ten nations that make up the ten nation kingdom that the ten kings arise with in that the Antichrist will arise from among.

The Fulfillment of Dan 8

**NCCR Editor: I found a Google+ about page for James D Albright. The thing is I can’t confirm if it is the same guy of the video, but his about profile sounds like it could be: Google+ About Page

There is a counter-terrorist NGO dedicated to learning about Islamic terrorism. It goes by the acronym of NEFA Foundation. The inspiration for the acronym is al-Qaeda’s act of war in attacking on American soil targeting primarily civilians. I do the like the full meaning of the acronym for NEFA which is Nine Eleven Finding Answers. I suspect the NGO prefers to be known by its acronym because the term NEFA Foundation has a better air of education than the full wording which has the slight air of perhaps a bit understand the enemy for revenge.

At any rate I am on the email list that sends updates of pdf documents produced to understand the enemy. Below is one of those pdf files that I converted to a Word Document and posted HERE. The document is about al-Qaeda’s superstructure that in NEFA’s opinion demonstrates a bit more centrality than was at first believed. It is an interesting paper.