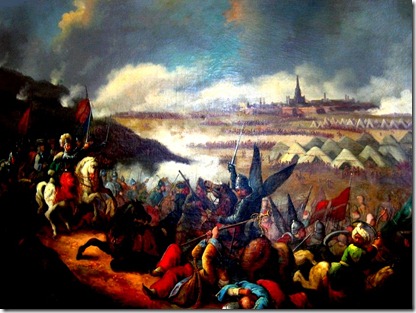 I am a member of a Facebook group called 1683 AD. The year is a reference to the last time Islamic military invasion attempting to enslave Europe to Political Islam. In this case King Jan III Sobieski decisively won the battle that prevented the conquest of Vienna from Ottoman Turks. I am an American; however if anyone spends anytime at Facebook 1683 AD it is apparent most of the members are European. And I am guessing the Europeans in this case are mostly citizens of the United Kingdom (UK) because the predominant language is English.

Since the 1683 AD group members are quite anti-Islamist and has a message to prevent the Islamization of Europe (and/or the UK); I am certain these brave fellows are branded as racists and promulgators of hate-speech. After all Dutch politician Geert Wilders has been under prosecution for hate-speech and incitement to violence with his film Fitna. The film Fitna merely utilizes quotes from the Quran, the words of Muslim Clerics and footage that verifies the blight of Political Islam. The plight of Geert Wilders in Netherlands is the Free Speech limitations imposed by a European culture that is moronically so into Multicultural Diversity they are willing to sacrifice their Western heritage to an immigrant Islamic culture that is increasingly becoming anchored in Europe by a high birthrate and demanding that the practices of Islamic Culture such as Sharia Law become accepted and supersede the Rule of Law. This is the very rule of law that still has some Leftist accepted Freedoms.

Now that I have talked up 1683 AD, I feel constrained to cross post a very lengthy post from the 1683 AD blog version of the Facebook group. The information disseminated is about the difficulty of developing Conservative Talk Radio on the level that exists in America. You see the European governments and the EU have control of the spoken media. Anything of a Conservative nature or anti-Islamist nature has to go through the approval path of government influenced and Leftist controlled media. Without that approval there is no alternative for voters to fully comprehend that Socialist practices are destroying government budgets and that the purist nature of Islam is a threat to the Freedoms still available to Europeans.

Another reason I am cross posting the 1683 AD post is because the American Left wishes to impose European Multicultural Diversity and limits on Free Speech in American Islamism is using First Amendment rights of Free Speech and Religious Freedom to overthrow the Constitution and replace the greatest Document outlining Life, Liberty and the Pursuit of Happiness with despot theopolitical Islam and Sharia Law.

My fellow Americans take the time to read the 1683 AD post to understand that which could be instituted in America.