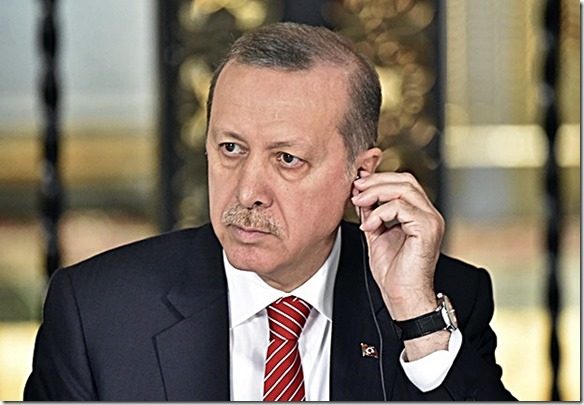 If you can’t tell this load of garbage being broadcast en masse on Turkish television and pro-Erdogan website is a bunch of Antisemitic fiction issued to inspire Jew-hatred then you are probably a Muslim, a Left Wing Israel hater or a White Supremacist. AND YET I doubt the Obamasiah Administration, the Democratic Party and American Mainstream Media is telling anyone this is unacceptable.

The film, titled “The Mastermind,” first aired on March 15, 2015 and has been broadcast repeatedly since then; in addition, the Turkish Islamist pro-AKP media are circulating the film on their own websites.

According to this film, Jewish “domination of the world” goes back 3,500 years, to the days of Moses. The film presents three Jewish historical figures who, it claims, shaped the Jews’ hunger for power: the medieval Spanish philosopher and Torah scholar Moses Maimonides, Charles Darwin (who was not in fact a Jew), and German-American philosopher Leo Strauss… (Islamist Turkish President Erdogan Says A ‘Mastermind’ Is Plotting Against Turkey; Antisemitic ‘Documentary’ Says Jews Have Been ‘Mastermind’ For Over 3,500 Years; By Frau Katze; BlazingCatFur.ca; 4/14/15)

Mastermind opens with the speech, in which Erdoğan describes “operations” against Turkey. “Behind all these there is a mastermind,” he explains, before telling his audience “you know who it is.”

The narrator then says this mastermind, who “rules, burns, destroys, starves the world, creates wars, organizes revolutions and coups, establishes states within states, [and is] the curse of the entire world,” can be found “in Jerusalem, where the sons of Israel live,” before delving into a conspiratorial tirade of historical manipulation.

“This is pretty much the worldview in the AKP now,” says writer and political commentator Mustafa Akyol, referring to Turkey’s ruling Justice and Development Party.

“The message they’re pumping into society is [that there is] a global Jewish conspiracy against the AKP.” (Turkish Film “Mastermind” Purports to Reveal Jewish Conspiracy: By Nick Ashdown; The Media Line; 4/26/15)

New Anti-Semitic Film All the Rage in Turkey

Originally from: The Gatestone Institute

Originally published under the title, “Turkey’s Supposed Nemesis: “The Mastermind.” 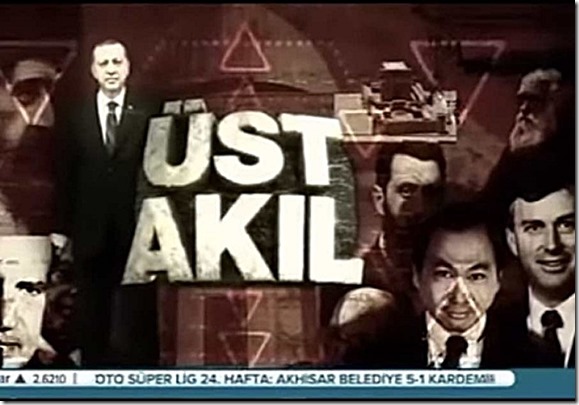 Turkey’s biggest enemy, according to its Islamist rulers, is not the fanatical jihadists who now neighbor their country in large swathes of land in Syria and Iraq; nor is it the thousands of “sleepers” at home — the same jihadists who have not staged a sensational act of terror, but might yet.

The enemy is not the political and military advance of Shiite radicals in the region, or a nuclear Iran. It is not extreme left-wing terrorists who only recently murdered a state prosecutor. It is not Russia, China or Western civilization. It is what President Recep Tayyip Erdogan says is “the mastermind” that tirelessly plots against Turkey.

In a December 2014 speech, Erdogan said:

I am emphasizing this: Do not think that these are operations that target me personally. Do not think that these operations are against our government or any [political] party. My friends, the target of these operations and initiatives is Turkey, Turkey’s existence, her unity, peace, and stability. They are especially against Turkey’s economy and its independence. As I have said before, behind all these there is a Mastermind, which has now become part of our national conversation. Some ask me, ‘Who is this mastermind?’ and I say, ‘It is for you to research this. And you do know what it is, you know who it is.’

Orders taken, a fiercely pro-Erdogan television news channel, A Haber, decided to research “that.” Thus, the documentary “The Mastermind” came into being. The film was first broadcast on March 15, 2015 and has been repeatedly aired since then, in addition to several pro-government media outlets posting it on their websites.

The main theme of the film is the 3,500-years of “Jewish domination of the world.” It focuses on three “Jewish” historical figures (one of whom was not Jewish): the medieval Spanish philosopher and Torah scholar Moses Maimonides, Charles Darwin (who was not a Jew), and German-American philosopher Leo Strauss.

Here are some narrative excerpts from the film, which opens with images of the Star of David and a replica of the Temple in Jerusalem:

The Mastermind, whose roots go back thousands of years, who rules, burns, destroys, starves the world, creates wars, organizes revolutions and coups, establishes states within states — this ‘intellect’ is not only Turkey’s curse, but the curse of the entire world. Who is this mastermind? The answer is hidden inside truths and facts that can never be called conspiracy theories. …

This story begins in the very old days, 3,500 years ago, when Moses brought his people out of Egypt to Jerusalem. The only guide he had was the Ten Commandments… We have to look for the mastermind in Jerusalem where the sons of Israel live. …

Maimonides… who lived in the Middle Ages believed that ‘the Jews are the Masters, and all other people are to be their slaves'”

The film then features several pro-Erdogan pundits, academics and journalists, commenting on the mastermind. “As they destroy the entire world, the Jews are searching for [the lost] Ark of Covenant.” says one. “The Jews use Darwin’s theory [of evolution] to assert that God created them – but everyone else evolved from apes,” says another. One claims that the Jews believe that they, the descendants of Isaac, consider themselves the masters, and that “all of us,” the descendants of Ishmael, are created to serve the Jews. And another blames “the mastermind” — whom he identifies as the Jews as well as the U.S. (which the film earlier claims is dominated by the Jews) for both the destruction of the Ottoman Empire and for the coups in modern Turkey aimed at ousting Islamist leaders and parties.

Finally, an advisor to Prime Minister Ahmet Davutoglu claims that all anti-government activity in Turkey was, in fact, attempts by “a mastermind” to bring down Turkey and its government.

Sounds surreal? Not in Turkey in the year 2015. “The Mastermind” is not the product of a bunch of crazy fanatics. It is a calculated move by a bunch of smart politicians who want to win votes (and often succeed) from an inherently anti-Semitic, religiously devout Muslim population.

According to the findings of a survey by Switzerland-based pollster WIN/Gallup International, 79% of Turks identify themselves as religiously devout, compared to 75% of people in the Palestinian territories and just 30% in Israel.

Among many Sunni Turks, anti-Semitic sentiment is often a prerequisite to piety. Therefore, the film “The Mastermind” [theoretically but most likely practically too] directly targets an audience that makes 79% of Turkey — more than 60 million people — ahead of critical parliamentary elections on June 7.

It is an ugly but clever move, reminiscent of the various methods applied by the Nazi propaganda machine in the 1930s, to abuse millions of minds.

All you need, in this evil scenario, is a theory linking every evil to the Jews, and a large enough audience ready to buy your fraudulent conspiracy theory.

Edited by John R. Houk for this Blog.

Burak Bekdil, based in Ankara, is a columnist for the Turkish daily Hürriyet and a fellow at the Middle East Forum.