While the Leftist are exploiting the Parkland Massacre in a Broward County Florida high school for gun control, more and more indications the Broward County Sheriff Department (BCSD) was so derelict in procedural management that this police department is quite probably responsible for 17 murdered individuals and some wounded. 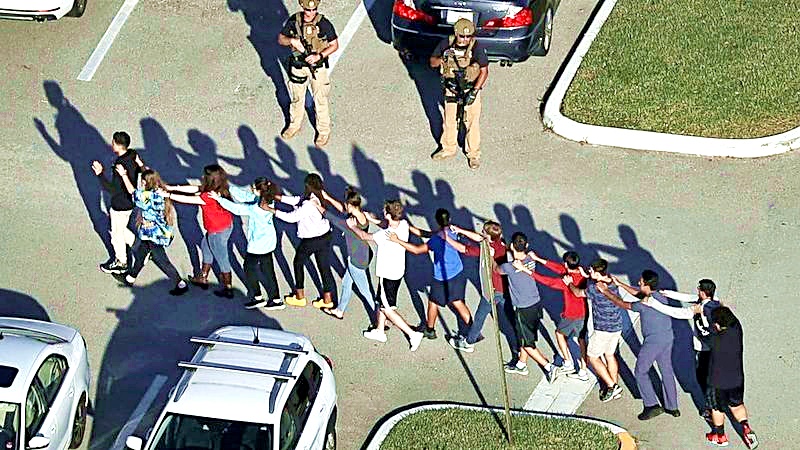 Legal Insurrection shares what it knows to date. I am guessing more details are forthcoming.

What in the world is going on with the Broward County Sheriff’s Department?

The more we find out, the worse this gets

The latest Florida school shooting is not just tragic, but as one reader pointed out, atrocious. Atrocious because every law enforcement agency involved ignored eleventy billion (approximately) red flags.

As more information becomes available, it’s looking more and more like there are some serious problems within the Broward County Sherrif’s [sic] department. We’ve chronicled several of those here, here, and here.

The failure of the designated school officer to engage the shooter (he’s now defending himself, saying he believed the shooting was happening outside of the school), then the revelation that four officers sat outside during the bloodbath, EMT’s who weren’t allowed to enter the school and begin working to save the wounded, and that’s just the beginning of what’s turning into an all-out scandal.

Most recently, Buzzfeed reported, based on dispatch records they obtained, that the number of calls to the Cruz home was double that disclosed by the BCSD. Most of the calls not mentioned by the BCSD were for domestic disturbance issues, fights between Cruz and his brother, or the like. Nonetheless, they were not included in reports and records released by Broward County.

Broward County Sheriff Scott Israel refuses to resign and blames the officer on duty for his failure to engage the shooter:

Broward County Sheriff Scott Israel refusing to resign telling @nbc6: "I gave him a gun. I gave him a badge. I gave him the training. If he didn’t have the heart to go in, that’s not my responsibility." Clip from our one-on-one interview below. #DouglasHighSchool pic.twitter.com/FV5Gn0ZEBY

As heat on the department has intensified, the Broward County Sheriff’s office strongly encouraged all employees to “stand as one” against a “flurry of media allegations.”

For several days, a story suggesting Broward County softened policies against juveniles has made its way around the internet. This story alleges the Broward County Sheriff’s Department was in cahoots with the Broward County School District. An arrangement of some kind was made wherein BCSD would go easy on minors in order to artificially inflate crime statistics, helping both the department and the school district to obtain grant money.

Whether or not this theory is true, we don’t know. What we do know is that according to a handful of experts, Cruz could have faced charges well before he went on a murder rampage had Broward County handled his case differently or even handled his case like other departments in the area.

From the Miami Herald:

His troubling behavior gave law enforcement plenty of opportunities to investigate and arrest him — and even take away his guns — long before he shot up Marjory Stoneman Douglas High School in Parkland last week, according to interviews with former South Florida prosecutors and legal experts.

In recent years, South Florida police detectives have arrested a slew of young men in unrelated cases who exhibited similar, troubling behavior on a variety of charges. Cops took them seriously.

It never happened with Cruz.

“There’s no doubt there was a failure,” former Miami-Dade prosecutor Marshall Dore Louis said of how law enforcement handled tips about Cruz. “The idea that they were aware of it and could do nothing is absurd. … We can’t let this happen again.”

…“The standard isn’t whether that information itself was ‘arrestable’ but whether law enforcement had an obligation to investigate a violation of the law,” said John Priovolos, a former Miami prosecutor. “A detective should have been assigned. Subpoenas should have been sent to Instagram to locate the IP address and verify it was Cruz.

Even if a case couldn’t have been made, the teen might have been placed squarely on the radar of police analysts who monitor potentially dangerous people who post online, Priovolos said.

“At the very least, the most capable intelligence detectives should have been monitoring him,” Priovolos said.

But none of that happened. And now 17 people are dead.

Legal Insurrection went live on October 12, 2008, originally at Google Blogger.  We hit our one-millionth visit about 11.5 months later, our second million a few months after that, and since then readership and linkage from major websites have grown dramatically.

In June 2011, we switched to a self-hosted WordPress format with a custom design which incorporates many unique functions both visible to readers and behind the scenes.

In August 2012, we opened a related blog, College Insurrection.

Legal Insurrection now is one of the most widely cited and influential conservative websites, with hundreds of thousands of visitors per month. Our work has been highlighted by top conservative radio personalities, such as Rush Limbaugh and Mark Levin, and Professor Jacobson regularly appears as a guest on radio shows across the nation.

Our writings have been linked by virtually every major conservative publication and many mainstream media publications, including The Atlantic Wire, The National Review, The Hill, New York Magazine’s “Daily Intel”, The Christian Science Monitor, The Boston Herald, The New York Times, Gothamist, CBS News, The Wall Street Journal, Investor’s Business Daily, The Washington Times, AOL News, The Week, and many, many others.

One thought on “What in the world is going on with the Broward County Sheriff’s Department?”