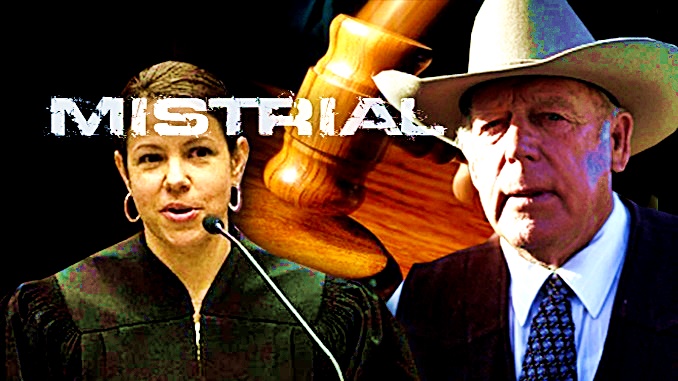 I’ve been following the trials and tribulations the Bundy family of ranchers a number of years. The Bundys have received persecution from the Federal government, especially the Bureau of Land Management (BLM) over property and public grazing land.

In the last post about the Bundys and Federal Prosecutors, “Will Bundy Prosecution MISCONDUCT be Given Pass by Judge Navarro?”, I elaborated a tiny bit of the misdeeds of the BLM grabbing Land and then exorbitantly charging ranchers to graze on Federally seized land.

I found out in a Tim Brown post that U.S. Federal Judge Gloria Navarro has declared a mistrial because of the blatant prosecutorial misconduct. Brown implies the few that have face minor charges and have been convicted might have their convictions tossed. Essentially this is yet another stain on Obama Administration non-legislated rules and regulations making it easier for government agencies to seize land and tell land owners how to work their own property.

Now comes the observation that will surely get me in trouble with members of the Church of Latter Day Saints (aka Mormons).

I consider myself a Conservative Biblically-oriented Christian. Most Mormons also consider themselves the same. However, most Christians that believe the Christian standard for faith in the Trinity believe Father, Son and Holy Spirit are three Persons that constitute ONE God. The persons of the Godhood unity are all coequal as one. 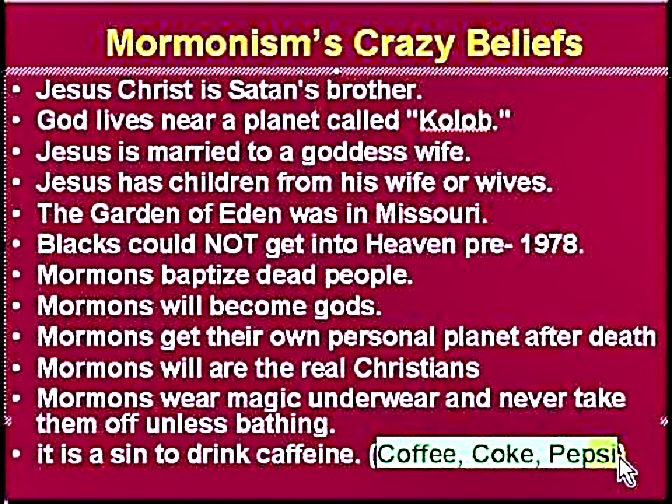 According to Mormonism, Jesus is a created being, the first spirit to be born of the Father (Mormon Doctrine, p.129) and a celestial mother (Mormon Doctrine, p.516). Therefore, Jesus could not be the eternal God or part of an eternal Trinity. Mormons also teach that both the Father and the Son are men with bodies of flesh and bone (Doctrine & Covenants 132:20; Articles of Faith, p 38); as two separate people, the Father and the Son cannot be considered “one.”

… READ ENTIRITY (Question: “Do Mormons believe in the Trinity?” GotQuestions.org)

Since Christ is the same yesterday, today and forever; Christians believe Jesus is eternal and not a created being. As with the Trinity and the coequal Godhood, Christ as God is the coequal unborn Creator who emptied His Divine characteristics to be born in the flesh. Hence Jesus is not only coequal in the Godhood, He is both fully man and full God. This perfect nature is the basis of the Redemption of a believing humanity.

Mormons are not so taught:

8. Prior to creation human spirits were literal children of heavenly parents. Although their spirits were created, the essential “intelligence” of these spirits is considered eternal, and without beginning. At a family council, God the Father told the spirit-children that according to his “plan of salvation” they would have to leave their heavenly home, take on human bodies, and be tested before they could progress to godhood. Satan rejected this plan and wanted to implement one that would have involved loss of moral agency. Jesus opposed Satan and offered an alternative plan in which he would take on human form and live a sinless life so that his spirit brothers and sisters could become gods. When his plan was not accepted, Lucifer is said to have rebelled and taken “the third part” of the hosts of heaven with him to the earth to serve as tempters. … READ ENTIRETY (9 Things You Should Know About Mormonism; By Joe Carter; The Gospel Coalition; 7/15/14)

Here are some more excerpts on the Mormon Jesus-Satan brotherhood:

In Mormonism, Mormons deny Jesus Christ’s unique divinity. Mormonism teaches that Jesus Christ is a created person. Mormons teach that every person including Christ has had two births. The first birth occurs as a spirit child in preexistence state.  This first birth happens when sexual relations occur between an exalted man, a god, and his goddess wife.  The second birth occurs much later as a human being.

… Mormon theology states that Christ was the first and foremost of subsequent billions of spirit children created through sexual intercourse between the earth god and his celestial wife. Mormon theology also teaches that later in order to produce the body for Jesus Christ the earth god again had to have sexual intercourse this time with the “virgin” Mary, who became Jesus’ earthly mother.

… In Mormon theology, there are infinite numbers of planets and infinite numbers of “gods” for each of those planets.  The essence of Christ is no different from the essence of any spirit child of Elohim, whether of men or of Satan and his demons. Every person on earth has the same essence or divine spark that Christ has. This means that every person can have the ability to become their own god or goddess. …

Mormon theology also teaches that Christ has a family relation with Satan. In other words, Jesus Christ is Satan’s brother. This is contrary to biblical Christianity and is just another example of how the two Jesus’ differ.  In Mormon theology since Satan (and his demons) was also a pre-existent spirit child of Elohim and his celestial wife, Satan is Christ’s brother. Looking closely at this teaching, we can logically conclude that the devil and all the demons are the spirit brothers of everyone on earth. This would mean that Christ, the Devil and we are all brothers and interrelated.

… Brigham Young’s controversial Adam-God discourse of April 9th 1852, he taught that the body of Jesus Christ was the product of sexual intercourse between God (Adam) and Mary, who then married Joseph.  This teaching is also used later to justify the marriage of more than one women. At the very core, this teaching denies that Jesus Christ was conceived by the Holy Ghost, and it maintains that Jesus was the literal offspring of the Father because according to Mormonism, the Holy Ghost does not have a physical body and could not have had sexual relations with Mary. In Mormon theology, the Father has a physical body and could have had sexual relations with Mary. The Father is “of flesh and bones.” … READ ENTIRETY (WHO IS THE MORMON JESUS? EmpoweredByChrist.org)

So, here’s the thing. I’m not a big fan of Mormonism. The Church of Christ of the Latter Saints are a cult spinoff of the true Christian faith. AND YET, present day Mormons observe a morality that places many a mainstream Christian to shame. AND present-day Mormons are Patriots that honor the Flag, our nation and most importantly the U.S. Constitution initiated by America’s Founding Fathers.

The Bundys are these kind of Patriots. As a Christian American, I stand with the Bundys to protect their Constitutional Rights the American Left has slowly snuffed out for decades.

And with these my personal thoughts, I encourage to read the Tim Brown post about Judge Gloria Navarro calling a mistrial due egregious prosecutorial misconduct. I like Brown’s thought the weight of the law should be turned on the crooked prosecutors who have persecuting the Bundy family and other Ranchers.

After sealed hearings took place in Nevada in the Bundy Ranch standoff trials, Judge Gloria Navarro declared a mistrial due to multiple Brady violations by the prosecution, but will this mean there won’t be a retrial?  Probably not.

Navarro blasted the prosecution for their lawless behavior in not turning over several exculpatory items to defense teams that were favorable to them.

Among those items were the cameras that were set up prior to the impoundment in 2014 in Bunkerville, Threat Assessment reports, names of potential witnesses, and reports from the Office of the Inspector General (OIG) reprimanding the BLM for not enforcing the court orders for years.

In all, there were at least seven Brady violations.

These violations are constitutional violations of the Fifth Amendment and Due Process.

Again, I ask, why are no charges being levied against Steven Myhre, his team of attorneys and the BLM in all of this?  They have been determined by a judge to be in violation of the law!

The prosecution didn’t act negligently nor did they violate the law unwillingly, but willingly.

The government falsely represented that the view of the Bundy home was unintentional. This is huge. There could be, at minimum, sanctions coming for Acting US attorney Steven Myhre and other prosecutors.

Moving on to another item, Navarro referenced the snipers and that the indictment charges false representation, “But now we know there were snipers.”

She found that the information is favorable to the accused and bolsters the defense… “The court does find prejudice toward the defendants. This information may have caused a difference in the opening statements, cross examination of witnesses and undermines the outcome,” she said.

The judge continued her rebuke of the government for about an hour. She included other evidence, such as the threat assessment report and a log of activities surrounding the impoundment.

Several motions were made after mistrial was declared.

Ryan Bundy asked that the terms of the release of the defendants be changed so that they might be able to go home for the holidays to be with their families and the Las Vegas Review-Journal requested the unsealing of the evidence.

Additionally, the defense asked the Greg Burleson and Todd Engel be released, and it is expected that they will ask for their convictions to be overturned due to the suppression of evidence in their trial.

All of these were considered by Judge Navarro and concerning the release of the defendants, she said that she would need to deal with pretrial services before ruling on that.

As to the request for unsealing the evidence, that would be answered on January 18th, 2018, almost two years since the Bundys were arrested on January 26, 2016.

The issue concerning Engel and Burleson will also have to wait until a later date.

One thing should be done here and that is to simply release all of these men.  Judge Navarro has to know the level of corruption that is clearly on display from Myhre’s office and the BLM.

The only just thing to do would be to release these men and not allow them to face trial again.  The US government has done enough damage to these men and their families.

Additionally, Steven Myhre and every person involved in suppressing the evidence should be arrested and charged.  If found guilty, they should not only be disbarred or removed from public service, but they should also face the same penalties that they sought for each and every defendant.  In other words, these people would never see the light of freedom again if convicted.

Tim Brown is an author and Editor at FreedomOutpost.com, SonsOfLibertyMedia.com, GunsInTheNews.com and TheWashingtonStandard.com. He is husband to his “more precious than rubies” wife, father of 10 “mighty arrows”, jack of all trades, Christian and lover of liberty. He resides in the U.S. occupied Great State of South Carolina. Tim is also an affiliate for the Joshua Mark 5 AR/AK hybrid semi-automatic rifle. Follow Tim on Twitter.