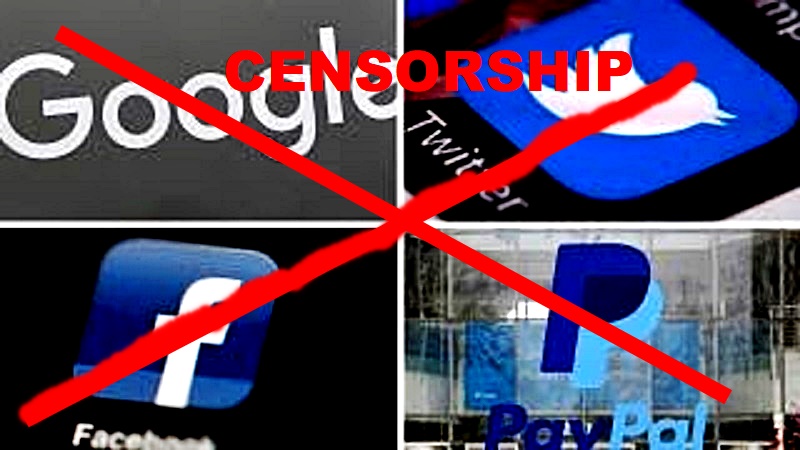 I don’t know if you have noticed the American Left has been trying to shut up Conservative and Counterjihad outlets by attack their pocketbooks based on the Marxist oriented SPLC hate list. The SPLC hate list places non-violent, Conservative/Biblically Christian values organizations as well as those that expose the violent nature inherent in Islamic revered writings on the same list as the violent KKK and the various Neo-Nazi organizations. Ironically the SPLC does not have violent ideologies like Antifa, Black Lives Matter, the New Black Panthers, Marxist-Racist Black Liberation Theology and the ilk on a Hate List.

You could probably win a bet in saying the Leftist Mainstream Media (MSM) has not reported or extremely under-reported the Leftist attack on the financial situation of these organizations. This is the reason behind me wondering if you were aware of the financial attack.

Jihad Watch (Robert Spencer) and Pamela Geller were suspended. Then a few days later were reinstated (Jihad Watch & Geller) to PayPal. I suspect their following made such a big deal that PayPal felt compelled to reinstate them.

I use PayPal on my blogs. According to the SPLC I would be a propagator of hate because I would be categorized as a homophobe (Supportive Biblical Values), Pro-Life/anti-abortion thus categorized anti-women’s Rights, Islamophobic (Exposing violence in Islamic revered writings and correlating to today’s Muslim terrorism), Pro-Christian in government yet anti-government in Faith and probably lesser SPLC Marxist violations I can’t think of now at this moment.

If a Leftie complains to PayPal they would probably suspend my account. I don’t have a huge Spencer/Geller support base. I would be forced to look elsewhere for online support. Can any of you fellow small potatoes bloggers relate?

Bare Naked Islam (BNI) has a story on SPLC-hate related influence, listing other Leftist and Islamic-apologist websites creating their hate lists pushing financial institutions to dump ethical organizations that expose the Left and Pro-Islamist interests. For sure BNI does rub some folks the wrong way with their brusque literary style, but the info is valid.

I have found myself in Social Media jail with both Facebook and Google in the past. I always found the jail an interesting plight since I do not use profanity nor do I advocate any kind of violence especially murder, of those I highly disagree with. So, I was in Social Media jail for either being a Biblical Christian, the Leftist epithet of being a homophobe, the Islamic Apologist epithet of Islamophobe or whatever Conservative value upset a whiner who complained.

The pseudonymous Counterjihadist Bill Warner discovered Social Media jail recently and he has a much larger following than I. And CBN.com has a story on the effects of SPLC Christian-bashing. I am cross posting the Warner email and the CBN.com story.

Strategy To Survive The Silencing Storm…

The Life Preserver for the New Censored Web 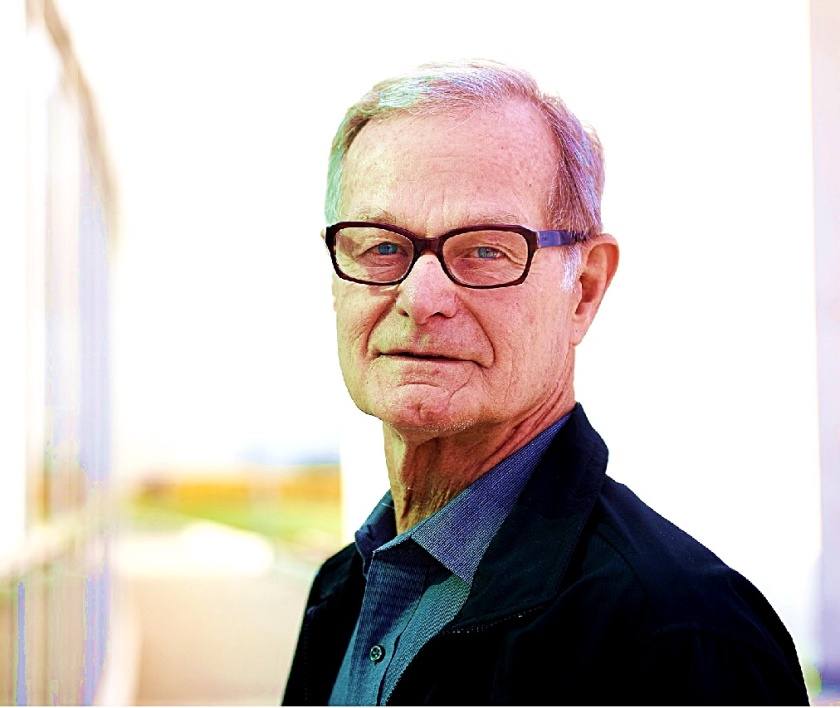 Twitter put me on a 12-hour ban for mentioning Islamic doctrine (see “offensive” tweet below) and Germany banned my account for good with no explanation as to why. 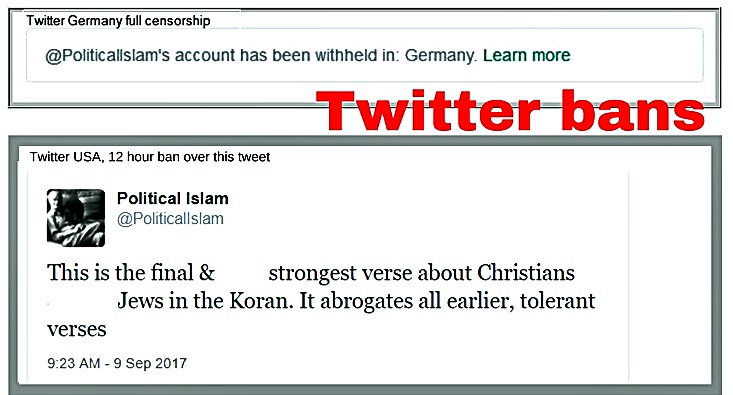 Google, Facebook, YouTube, and Twitter are no longer “friendly” to our message. Political correctness reigns on our major social media platforms and is suppressing free speech across the right and left spectrum of religion and politics. The Islamo-Left is adhering to the Sharia.

There is a distinct possibility that eventually I will be totally censored from these major social media platforms. We need to prepare for that day. The only method of communication that is entirely safe is newsletters. It is for this reason I ask you to forward my newsletters to others and urge them to sign up so the facts about political Islam can be known. I wish to thank those of you who do this now. We must be creative and stand firm for our rights of free speech and expression.

Here’s a great example by Pamela Geller & friends at AFDI. Seriously, “Can’t we talk about this?”

Vimeo VIDEO: Can’t We Talk About This?

[Blog Editor: The rest of the Warner email is further resource and product promotion which I will not post. Except the promotional for a teaching video entitled, “The Half Truth of the Islamic Golden Age of Spain”.]

VIDEO: Bill Warner PhD: Half Truth of the Islamic Golden Age in Spain

The Hate Machine: How the Southern Poverty Law Center Is Cashing in by Bashing Christians

Once upon a time, the Southern Poverty Law Center served as a champion in the civil rights struggle. It’s said that the SPLC helped put the Ku Klux Klan out of business. Klan membership used to be in the millions. Today it’s only a few thousand.

But when you glance at the SPLC’s map of hate groups in America today, there are so many that one might think America is consumed with hate.

Changing the Definition of ‘Hate’

When you’ve put the Klan out of business and won all your battles, but you’re not ready to close your doors, you’ve got to find new enemies to fight.

One of those new enemies is former Vanderbilt history professor Dr. Carol Swain. Swain grew up in the old South and fought poverty and racism to become a university professor. She’s an expert on white nationalism. But she has publicly attacked the SPLC, and Swain, a conservative Christian, found herself on the SPLC’s hate list as a supposed “apologist for white supremacists.”

Other SPLC targets have included Dr. Ben Carson – who was later removed from its hate list – female genital mutilation victim Hirsi Ali, and even small charities like the Ruth Institute, whose mission is to help families and children. The Ruth Institute said, “If this makes us a ‘hate group,’ so be it.”

The SPLC: A ‘Money-Making Machine’

Among the list of Christian groups on the SPLC’s Hate Map are many local churches. It’s usually because they oppose the gay agenda.

The list includes the Family Research Council. FRC Executive Vice President General Jerry Boykin doesn’t pull any punches, telling CBN News, “First of all, the SPLC, you have to understand, is probably one of the most evil groups in America. They’ve become a money-making machine and they’ve become an absolute Marxist, anarchist organization.”

Alliance Defending Freedom, a Christian legal group, is also on the list. Kerri Kupec, ADF legal counsel and communications director said, the Southern Poverty Law Center once did good work, “but the SPLC lost its way a long time ago.”

Nothing ‘Poor’ About the Southern Poverty Law Center

Kupec dismisses the SPLC as a “direct mail scam,” but marvels at the SPLC’s revenues, with assets listed at $315 million.

“I have never heard of a group with ‘poverty’ in its name that has so much money,” Kupec said.

Apple, JP Morgan, and actor George Clooney are just a few who have given millions to the SPLC; there’s so much money coming in that some of it is going into offshore investments, a red flag for some, but offshore investing among charities is not uncommon.

The Link to Violence

What is more disturbing is what the SPLC’s opponents call a link to deadly violence against Christians and conservatives.

On August 15, 2012, Floyd Lee Corkins stormed into the Family Research Council’s Washington offices intending to kill. He wounded the building manager before he was stopped. A bullet hole still remains in a console in the lobby.

After his arrest, Corkins told the FBI where he heard about the Family Research Council’s Washington offices. On FBI video of his interrogation, Corkins says, “Southern Poverty Law lists anti-gay groups. I found them online, did a little bit of research, went to the website, stuff like that.”

Boykin adds, “Our people know coming here, based on reality and based on what happened here, they’re taking a risk.”

The SPLC later admitted, “We’re aware that the SPLC was among hundreds of groups that the man identified as the shooter ‘liked’ on Facebook. I want to be as clear as I can possibly be: The SPLC condemns all forms of violence.”

Is the SPLC Spreading Hate?

But after these attacks, some are asking the obvious: Does the Southern Poverty Law Center spread hate?

The SPLC did not respond to our invitation to be a part of this story and refute the claims made against it, but publicly remains unapologetic. The SPLC has stated repeatedly that their listing of Christian groups who oppose the LGBT agenda “is completely unrelated to religion, Christianity or the Bible. These groups are listed because they repeatedly lie in an effort to defame LGBT people.”

In 2007 former SPLC spokeman Mark Potok told a conference in Michigan, “I want to say plainly that our aim in life is to destroy these groups, to completely destroy them.”

The news media has begun using the SPLC’s hate map in stories about racism and bigotry, giving the map even more clout and credibility.

CNN published the list under the headline “Here Are All the Hate Groups Active in Your Area” before taking it down.

Forty-seven conservative groups and Sen. James Lankford have written the media demanding that it stop using the SPLC hate map as a source.

Boykin said, “The SPLC has no authority, except the authority they’ve given themselves, to build a hate map or to list people or organizations as haters.”

But there is no sign the Southern Poverty Law Center is changing course when the Left supports it so strongly, the news media relies it, and the donations keep rolling in.

Strategy To Survive The Silencing Storm

You are receiving this, as you are a member of the CSPI Community or a friend of Dr. Bill Warner, PhD. We ask that you share this with a friend or colleague. Please visit us at www.politicalislam.com.

The Hate Machine: How the Southern Poverty Law Center Is Cashing in by Bashing Christians