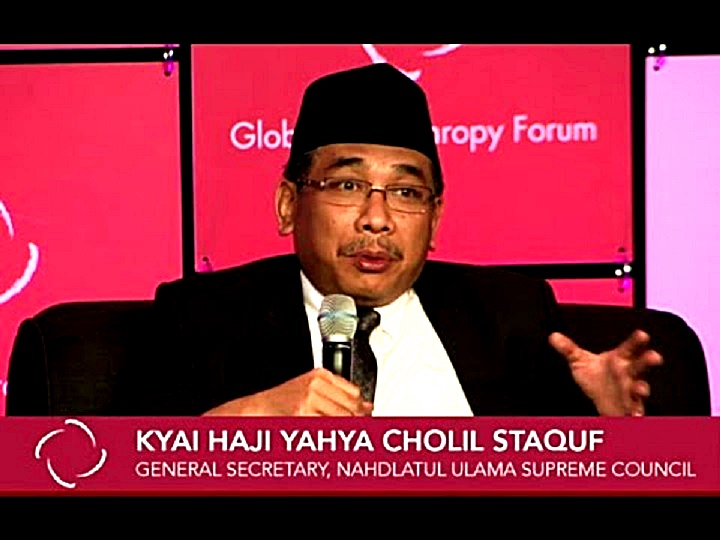 Any [fundamentalist] view of Islam positing the traditional norms of Islamic jurisprudence as absolute [should] be rejected out of hand as false. State laws [should] have precedence. – Yahya Cholil Staquf (In Interview, Top Indonesian Muslim Scholar Says Stop Pretending That Orthodox Islam and Violence Aren’t Linked; By Marco Stahlhut; Time.com; 9/7/17)

Fellow Community member Viana posted an excerpt of the Yahya Cholil Staquf interview at Time.com (of all the ironic Left Wing MSM places) who is an Islamic scholar from Indonesia. The reason the interview is significant is because the Muslim scholar proclaims the violence perpetrated by Islamic terrorists has EVERYTHING to do with Islam!

Nahdlatul Ulama (also Nahdatul Ulama or NU) is a traditionalist Sunni Islam movement in Indonesia following the Shafi’i school of jurisprudence.[3] NU was established on January 31, 1926 in Surabaya as a response to the rise of Wahabism in Saudi Arabia and Islamic modernism in Indonesia.[4][5]:59[6] The NU is the largest independent Islamic organization in the world[7] with membership of 40 million in 2003.[1][2]NU also is a charitable body funding schools and hospitals as well as organizing communities to help alleviate poverty.

Nahdlatul Ulama is known as an ardent advocate of Islam Nusantara; a distinctive brand of Islam that has undergone interaction, contextualization, indigenization, interpretation and vernacularization according to socio-cultural condition of Indonesia.[8]Islam Nusantara promotes moderation, compassion, anti-radicalism, inclusiveness and tolerance.[9]

Take Multicultural Diversity Leftists in America and Europe. When the leader of the largest Islamic organization in the world says Islamic violence is directly related to the tenets of Islam, you should really pay attention!

Now I do find it interesting that Time Mag published an interview that is essentially anti-Multiculturalism and irritating to Muslim Apologists. Loraine County Community College has published a guide on where various publications lean toward politically. Fascinating to me LCCC labels Time as centrist but with a proviso which I do concur:

Time.  Similar in content and format to the two other major U. S. newsmagazines, this periodical covers the news from a centrist point of view. [NOTE: Others label Time liberal or leftist.] (Bold text is Blog Editor’s but the brackets are the proviso by LCCC – Leanings of Magazines, Newspapers; LCCC Library – LibGuides – Detecting Bias; Last Updated 9/7/17 1:21 PM)

Media Bias/Fact Check has this evaluation of Time:

Notes: Time is an American weekly news magazine published in New York City. It was founded in 1923.  Time has the world’s largest circulation for a weekly news magazine. Time Magazine is factual in reporting and well sourced.  Has a left-center bias in story selection. (5/18/2016) Updated (1/12/2017) (Time Magazine; Media Bias/Fact Check)

Yes friends, if the word “Left” is there, there is a promotion of the evil of Multiculturalism. This is the reason I consider it incredulous that Time.com has such a counter-Multiculturalist interview.

Below is Viana’s excerpt of the Time.com interview of Yahya Cholil Staquf. But if you get a chance you should read the entire article at Time.com.

Appropriate on this, the 16th anniversary of 9/11. More and more Muslim leaders are making this admission. Indonesia is the world’s most populous Islamic nation. -Viana

Yahya Cholil Staquf states: “Western politicians should stop pretending that extremism and terrorism have nothing to do with Islam. There is a clear relationship between fundamentalism, terrorism, and the basic assumptions of Islamic orthodoxy. So long as we lack consensus regarding this matter, we cannot gain victory over fundamentalist violence within Islam. … Within the classical tradition, the relationship between Muslims and non-Muslims is assumed to be one of segregation and enmity. … To the extent that Muslims adhere to this view of Islam, it renders them incapable of living harmoniously and peacefully within the multi-cultural, multi-religious societies of the 21st century. … we live in a world of nation-states. Any attempt to create a unified Islamic state in the 21st century can only lead to chaos and violence.

Any [fundamentalist] view of Islam positing the traditional norms of Islamic jurisprudence as absolute [should] be rejected out of hand as false. State laws [should] have precedence.

Too many Muslims view civilization, and the peaceful co-existence of people of different faiths, as something they must combat. … There’s a growing dissatisfaction in the West with respect to Muslim minorities, a growing fear of Islam. In this sense, some Western friends of mine are “Islamophobic.” They’re afraid of Islam. … I understand their fear …

The West cannot force Muslims to adopt a moderate interpretation of Islam. … Western politicians should stop telling us that fundamentalism and violence have nothing to do with traditional Islam. That is simply wrong. …

Europe, and Germany in particular, are accepting massive numbers of refugees. Don’t misunderstand me: of course you cannot close your eyes to those in need. … the fact remains that you’re taking in millions of refugees about whom you know virtually nothing, except that they come from extremely problematic regions of the world. … there’s an extreme left wing whose adherents reflexively denounce any and all talk about the connections between traditional Islam, fundamentalism and violence as _de facto_ proof of Islamophobia. This must end. A problem that is not acknowledged cannot be solved. …”

Viana’s excerpt has been arbitrarily edited for what I believe is better readability.

One thought on “Staquf States Obvious – Islamic Terrorism is Islamic”