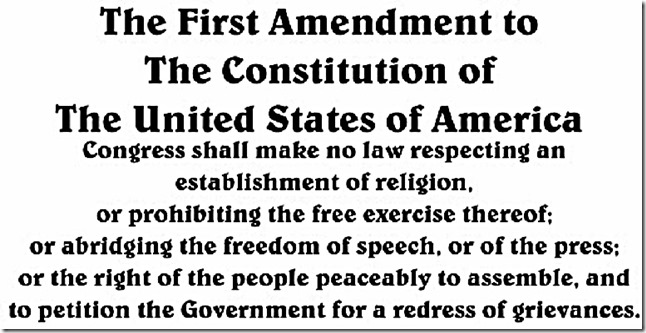 I have been several parts of a series entitled Disputing Separation Church/State (Parts 1, 2, 3, 4, 5 and 6). As of this writing I am up to Part Six and there is more to come. In doing the reading for these posts I came across a PDF designed as a brochure to dispute the Leftist influence that has move American Courts to stretch the interpretation of the First Amendment beyond the scope of its original intent. As I said I am still continuing my series on the subject; however below is an excellent to the point and relatively brief synopsis of reasons the present exploitation of the rule of law pertaining to the separation of Church and State is not a legal concept in the U.S. Constitution.

The Truth about Separation of Church and State

Contrary to popular opinion, the term “separation of church and state” is found nowhere in the United States Constitution.

While the First Amendment clearly forbids the creation of a national denomination, it says nothing about the so-called “separation of church and state.”

§  The term “separation of church and state” was first used by Thomas Jefferson in a letter to the Danbury Baptists in 1801, when he responded to their concerns about state involvement in religion. Jefferson’s letter had nothing to say about limiting public religious expression, but dealt with government’s interference in the public expression of faith.

§  It was U.S. Supreme Court Justice Hugo Black who first inserted the term “separation of church and state” into American jurisprudence in his majority opinion of Everson v. Board of Education (1947). He wrote: “The First Amendment has erected a wall between church and state. The wall must be kept high and impregnable. We could not approve the slightest breach.”

§  Black’s opinion was based on a previous misreading of Jefferson’s 1801 letter in the U.S. Supreme Court decision Reynolds v. United States (1878). Black also confused his history. In the opinion, he wrote that the Danbury letter was “almost as an authoritative declaration of the scope and effect of the First Amendment.”

§  The First Amendment states: “Congress shall make no law respecting an establishment of religion; or prohibiting the free exercise thereof; or abridging the freedom of speech, or the press; or the right of the people peaceably to assemble, and to petition the government for a redress of grievances.” No mention is made of a “wall between church and state.”

§  The true purpose of the First Amendment was to prohibit the federal government from establishing a national church, like the Church of England, or require that sectarian policy be forced on an individual state or on the federal government. While the amendment does recognize a “differentiation between church and the government, it does not mean that they could not cooperate with each other.”

§  In 2001, Daniel Dreisbach, Associate Professor of Justice, Law and Society at American University, wrote that Black was wrong to apply the term “separation of church and state” to the First Amendment. The danger of Black’s argument, according to Dreisbach, is that it gives constitutional reasons to “separate religion, religious values, and religious organizations from public life.” He continues: “If we can’t talk about religion in any meaningful way in public schools, religious citizens can’t communicate their faith in public life. [The public square] must be ‘sanitized’ of religious messages, and we are left with a strictly secular public life.”

§  The American Civil Liberties Union (ACLU) and its allies, along with other groups hostile to religious freedom, have used Black’s wording to:

o   Have public displays of the Ten Commandments removed from public buildings.

o   Tell an eight-year-old girl that she cannot pass out handmade Valentines that read “Jesus Loves You.”

o   Tell pastors that they do not have the right to speak freely from their pulpits applying Scripture and church teaching to candidates and elections.

§  In 2005, the U.S. Court of Appeals for the Sixth Circuit, in ruling in favor of a public display of the Ten Commandments, wrote: “The ACLU’s argument contains…fundamental flaws… [It] makes repeated reference to ‘the separation of church and state.’ This extra-constitutional construct has grown tiresome. The First Amendment does not demand a wall of separation between church and state.”

About – ALLIANCE DEFENDING FREEDOM: FOR FAITH. FOR JUSTICE.

Alliance Defending Freedom is a servant ministry building an alliance to keep the door open for the spread of the Gospel by transforming the legal system and advocating for religious liberty, the sanctity of life, and marriage and family.

Recognizing the need for a strong, coordinated legal defense against growing attacks on religious freedom, more than 30 prominent Christian leaders launched Alliance Defending Freedom in 1994. Over the past 18 years, this unique legal ministry has brought together thousands of Christian attorneys and like-minded organizations that work tirelessly to advocate for the right of people to freely live out their faith in America and around the world.

Building an Alliance for Victory

Unlike any other legal organization, Alliance Defending Freedom employs a unique combination of strategy, training, funding, and litigation to empower its allies and … READ THE REST

4 thoughts on “The Truth about Separation of Church and State”