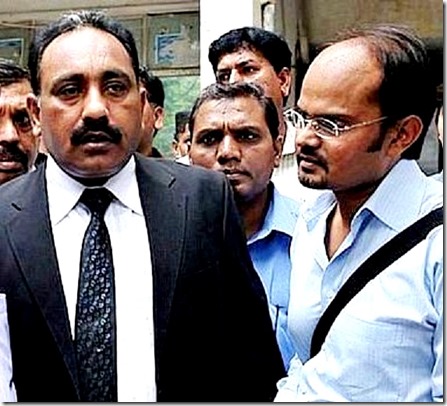 Shamim writes about minorities and the Christian minority in particular celebrating Minority Day under a different name in a form of a protest and calling it Equality Day. The Islamic government did not publicly celebrate Minority Day because it fell during the Muslim festival of Eid.

The Pakistan United Christian Movement (PUCM) is celebrating the Equality Day instead Minorities Day in Rawalpindi where leaders of minorities from Pakistan participated.

The leaders present a paper on how minorities are being targeted by the extremists in Pakistan, when we are equal citizen of the country, they said.

The government had declared August 11 as minorities’ day in 2009 by the efforts of then minorities minister Shahbaz Bhatti who was shot dead in the country’s capital in 2011.

The day signifies Quaid-e-Azam’s speech to Constituent Assembly on August 11 1947 in which he had said, “You may belong to any religion or caste or creed – that has nothing to do with the business of the State.”

The government is in no mood of celebrating minorities’ day.

However, Information Minister Pervez Rashid said that the day was falling during Eid holidays.

“Though Pakistan is going through a testing time—but minorities are on our priority list,” he added.

Talking to the gathering at Christian Study Centre – CSC Albert David, Chairman PUCM criticized the government declaring them a second class citizen in the country. Minorities have been ignored by the current government. August 11 was not only a day where Christians were especially made part of the whole nation, but a clear and wider picture was given to the members of the Constituent Assembly, he added.

Tahir Naveed Chaudhry Ex-MPA has launched a new political party on minorities’ day, 11 August. Talking to the media at the launching ceremony of Pakistan Minority Alliance- PMA he said that he will continue the struggle of Shaheed Shanbaz Bhatti, who played his role for Pakistani Minorities. I am the true follower of the Shahbaz Bhatti (late) and will continue the mission he started, he said.

Samuel Yaqoob chairman Muslim Masihi Ithad has protested on this day outside the Press Club Islamabad. He claimed that we have the equal rights according to the founders’ speech but the religious extremists are trying to draw a line between citizens of the country. 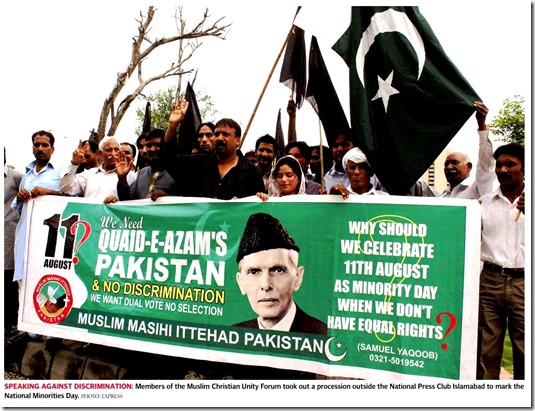 On behalf of British Pakistani Christian Association BPCA, Shamim Masih, a journalist and representative of BPCA in Pakistan held a meeting with leaders from the key faith in Lahore and an agreement was made for a peace mural to be incorporated at Joseph Colony Badami Bagh, Lahore.

Edited by John R. Houk. All links are for information and added by the editor. Shamim sent three versions of this post and I chose the one with the extra paragraph. Some of this information can be found in greater detail at the British Pakistani Christian Association (BPCA) blog under the title, “Newly Elected Pakistani Government refuses to celebrate state celebration termed “Minorities day,” as it would tarnish Islamic Eid Celebrations!”

Snapshot of Human Rights Activism from 2011