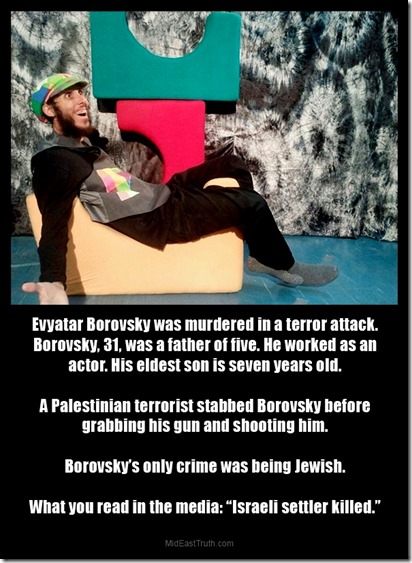 This glorification of terrorism by the PA is representative of the kind of leadership instilling Jew-Hatred and Israel-Hatred into the Arabs that call themselves Palestinians. What is the Obama-led U.S. government thinking in supporting these animals in creating a sovereign nation that will have two National Interests – the killing of Jews and the destruction of Israel?

I can see the reason for the EU nations, Russia and the United Nations (See Also HERE) supporting a Palestinian sovereign state because Anti-Semitism has re-inflamed the National/International Interests of those governments. In the USA on a national basis Anti-Semitism is still unacceptable. Unfortunately Obama’s Foreign Policy toward Israel (See Also HERE) and the Arabs that call themselves Palestinians is stamping our nation as fellow Anti-Semitics along with the EU, Russia and the UN. Even though a majority of Americans are very supportive of Israel, Obama’s support of Palestinian State and forcing Israel to give up half of their National Capital City Jerusalem will brand us as Anti-Semitic in the eyes of history. The creation of a Palestinian State quite possibly could lead to a second modern Holocaust of Jewish people as Jew-Hating Arabs surrounding the sliver of land that is Israel destroy the National Homeland of Jews all in the name of Allah and its pseudo-prophet Mohammed.

During our recent meeting in Ramallah, you stressed your absolute commitment to non-violence in resolving the Palestinian-Israeli conflict. We were encouraged by your remarks, and appreciate the time you shared with our delegation.

However, upon our return to the United States we were troubled to learn that a senior Palestinian Authority official, Sultan Abu Al-Einein, who previously served as your advisor holding the rank of minister, had recently expressed his open support for the murderer who killed Evyatar Borovsky, an Israeli who was stabbed to death by Palestinian terrorist Salam Al-Zaghal while he was waiting for a ride.

Mr. Al-Einein stated, “We salute the heroic fighter, the self-sacrificing Salam Al-Zaghal.” And he went on to note that “He [Al-Zaghal] insisted on defending his honor, so he went against the settler and killed him. Blessings to the breast that nursed Salam Al-Zaghal.”

We have also become aware that only hours after the murder, the administrator of Fatah’s official Facebook page glorified Al-Zaghal as a “hero.”

President Abbas, allowing this type of incitement and hatemongering to take place within your ranks is intolerable if you are truly dedicated to non-violence. We ask that you publically and officially denounce and condemn Mr. Al-Einein’s remarks at once and remove him from his position in your government. We also request that Fatah immediately remove its Facebook page glorifying this murder.

We look forward to seeing you take action on this matter and working with you to create a peaceful and prosperous future for the Palestinian people.

Ed Royce, Chairman of the House Committee on Foreign Affairs,

Ted Deutch, Ranking Member of the Subcommittee on the Middle East,

Brad Sherman, Ranking Member of the Subcommittee on Terrorism, Non-proliferation, and Trade.