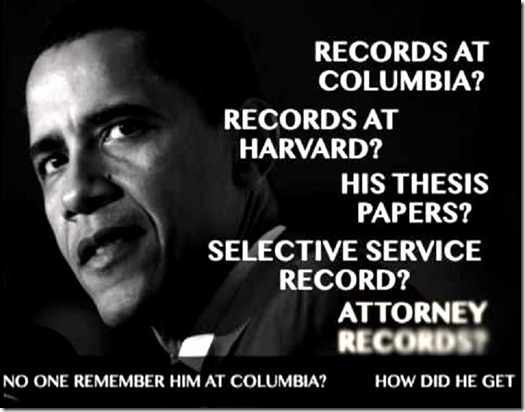 I watch the Fox News program The Five. If you watch the news at all you know that Dem Majority Leader Senator Harry Reid has been railing on GOP Presumptive Nominee Mitt Romney’s tax returns claiming he has not paid taxes. Reid includes in the accusation to prove the old Senator from Nevada wrong by releasing all his tax returns.

The Five’s sole Liberal blow hard Bob Beckel has been emphasizing Reid’s propaganda. Evidently former Libertarian VP Nominee for 2008 Wayne Allyn Root went to Columbia U with Obama. Root says that Obama should release the sealed College records if Obama has nothing to hide. Eric Bolling and the other Conservative hosts on The Five have been rebutting Beckel with this the same idea that Root has brought up. Beckel deceptively plays the Conservative retort off as who cares what anyone did in High School. The thing is we are not talking about High School in Hawaii. We are talking Obama’s young adulthood as a student at Columbia U.

I pray Romney is smart enough to talk about Obama’s sealed past if the Obama political machine insists on running a National Election like a local Chicago style crooked and dirty election. After all dirty politics is how Obama advanced his political career (See HERE and HERE and HERE). The dirty politics was in eliminating political rivals that under normal circumstances would have defeated Obama. BHO eliminated his rivals by exposing embarrassing information that made a rival unelectable. The irony here is that Obama has tons of secrets that he is keeping from the public and for some reason the Republican Party has failed to jump on this. My guess is that McCain would have beat Obama in 2008 if he would have jumped on Obama’s past that Obama has so diligently kept secret. (Although now I am convinced that a McCain Presidency would have been the demise of the Republican Party with the Conservative Tea Party base leaving the GOP to form a Third Party to rival the GOP for 2012.)

If Romney wants to win in 2012 he has to step on Obama’s secrets as much as Obama is trying to assassinate Romney’s character. Obama knows he can’t win on his record as November 6th approaches for voters to make their decision. The only way Obama can win reelection is by politically destroying Romney.

A friend of mine sent an article Root wrote for The Blaze. This Blaze article needs to go viral as a – tit-for-tat: You kill my dog I’ll kill your cat – against the Obama political machine.